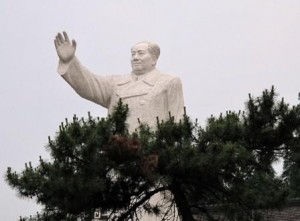 Last week I spent a couple of days in the very appealing city of Nanjing. Although a city of seven million, the contrast with Shanghai was immediately noticeable. I had thought Shanghai was relatively laid-back, people taking their time about life. On arrival in Nanjing, I realised that I had approached Shanghai from the perspective of Western cities. By comparison with Shanghai, Nanjing seemed like it was on a perpetual holiday – a very human pace of life, all the time in the world to talk and meet and enjoy life.

Yet, Nanjing had once been an imperial centre, during the Ming and Qing dynasties, and then the last stronghold of Chiang Kai-Shek, before Mao sent him packing to Taiwan (where he and his henchmen displaced the native people). Chiang-Kai-Shek also plundered the imperial treasures of Nanjing, taking as much as he could to that small island off the coast. Why? Spite? Greed? Yes, on both counts, but there was also a claim to imperial succession. And so now, if you take the time in Taipei, you can visit the museum and see many of the pillaged imperial treasures.

All of this came to mind as I spent a day visiting the vast estate that contains the Ming and Qing tombs in Nanjing. Chiang-Kai-Shek couldn’t steal these, at least. You walk along a winding path, between vast stone statues of horses, lions, elephants and mythical creatures. You stop by the Purple-Cloud Lake, visit the Universal Love Pavilion, stand on the Plum-Viewing Veranda and view, well, the plum blossoms. You pass through the Red Gate, marking the passage between two states of existence, between a known life and the very different life that awaits you. You climb the stairs up to the first pavilion, more stairs to the second pavilion, which is but a stepping stone to the mountain itself under which the Ming and Qing emperors are buried. Their graves are unmarked, enabling them to spend their afterlives in peace.

Why such vast memorials? Are they like ancient burial mounds, the Egyptian pyramids, or the tombs of monarchs in European churches? Political leaders have at some level always sought to be remembered, holding out hope that they will keep their status in the life hereafter (especially when they themselves have claimed a special relationship with the divine, if not a claim to be divine themselves – in moments of unhealthy overestimations of their own worth).

But I would suggest another feature plays a role in China: the veneration of ancestors. In a land in which belief in the gods has never been strong, in which the dominant norms have been determined by an atheistic Confucianism, and in which the strongest claim to any form of ‘religion’ is Taoism, the ancestors have played a crucial role. In a fashion continuous with the respect shown one’s parents and grandparents, one continues that respect after they have died. Scattered throughout the countryside of China are innumerable small house-like structures. Placed on the side of a hill, looking out over a small body of water, these tombs are the permanent homes of the ancestors. Close by the village, they continue to be part of the village. These vast imperial tombs carry on that tradition, albeit on an exponentially higher scale.

Did this practice cease with the last emperor in 1911? The next stage of our exploration moved to another part of the estate in which the imperial tombs lay. It was none other than the last resting place of Dr Sun-Yat-Sen, who has the unique distinction of being revered both in Taiwan as the fore-runner of the Kuo-Min-Tang and on the mainland as the one who began the process that led to the communist revolution in 1949.

If anything, Sun-Yat-Sen’s tomb was even more elaborate than that of the emperors. One vast edifice gave way to another as you climb his hill. Massive gates, another passage between lives, and then a sarcophagus on which lies a reposing statue of the doctor himself. This father of modern China is revered more than the emperors, although perhaps not more than Mao. I found myself in a mass of people paying their respects to this ancestor, especially because I was there a few days before the 100th anniversary of China’s October Revolution – on 9 October, 1911.

Exhausted at the end of a day of endless walking, climbing, talking, and pondering imperial tombs, I thought about Mao’s mausoleum. It is not here, in Nanjing, but in Beijing. A break with the imperial lineage, obviously, but even more respected than the others. For if you wish to visit the mausoleum, you need to stand for hours in a massive line before you can pay your respects.

Roland Boer is at the moment visiting professor at the Centre for the Study of Marxism Abroad, at Fudan University, Shanghai. His usual occupion is as research professor at the University of Newcastle, Australia – that is, when he is not voyaging by container ship or on long-haul bicycle tours. Among numerous publications, the most recent is Criticism of Theology: On Marxism and Theology III (2011).

Apart from voyages by freighter ship and riding my bicycle as far and as long as I can, I like to write. My recent work has focused on the engagements with theology by leading critics in the Marxist tradition (The Criticism of Heaven and Earth, 5 vols, 2007-14; Lenin, Religion, and Theology, 2013). I am currently working on Mao Zedong, pursuing another dimension of this tradition. In the last few years, I have focused on Eastern Europe and China, stumbling on a number of significant (and almost lost) texts relating to early engagements between Christianity and communism. As a result I am the Xin Ao International professor at Renmin University of China (Beijing), as well as being a research professor at the University of Newcastle, Australia.

One thought on “Letters from China: On Imperial Tombs”