My father had a collection of duck decoys so numerous you might have reasonably assumed he hunted. And he did. Once. Oh, he didn’t have a gun. But my mother’s Cousin Jimmy coaxed him along to the duck blind once. Once. Daddy bought the right kind of jacket, and after he died in 1997, I found it hanging in the upstairs back closet with the hunting license still in the pocket, dated in the early 1950s, when he and my mother were newlyweds.

I was a grown-up before I thought of the decoys as tools. To me they were just pretty. We like ducks, I thought. (They’re all living at my brother’s house now, or I would include a picture.)

During the time we lived in Northern Virginia, we would go to church on Sundays at the Old Presbyterian Meeting House, and often we would stop after church to visit one of Daddy’s law school classmates, known fondly to us as Uncle Willie. We would go into his rather fabulous den, decorated with animal heads and shiny firearms and lie on the rug and read the funny papers while the grown-ups drank a fabulous Bloody Mary, usually with the little celery leaves still on the stalk. The walls also featured prints of people on horses wearing scarlet jackets and jumping horses over fences. I knew about hunting from “Mary Poppins.” I felt sorry for the fox. Uncle Willie’s house seemed entirely exotic. It bore no resemblance to my reality. 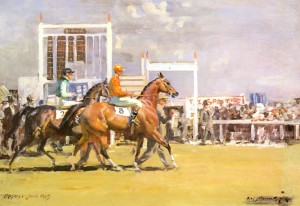 My father liked to go to the races. The prints at our house included this one. Daddy bought the print in England, while serving in the Army Air Corps during World War II. Of course he learned how to fire a weapon in basic training, but his job was behind the lines, installing radar systems in airplanes. And I’ll never know now whether it was his Methodist “Mumma” or his knowledge of the ways his friends were killed and maimed in the war, or his own fairly peaceful temperament, or even his lack of ease with technology of all sorts that made him not a gun person.

But he was not a gun person.

People use the resources available to them and for the most part embody the values and practices learned unconsciously in the homes where they are raised. Yes, some people are “raised right” and go in another direction, and yes, some people are raised terribly and turn out, by the grace of God, beautifully. But most of us spend a lifetime either unconsciously living out what we learned in childhood or trying hard to overturn the patterns of many generations.

If you grow up in a house with guns, you will think of them as a tool people use.

A person raised in a house where books and music and writing are the tools employed might write a scathing letter or a heart-wrenching poem or a grief-struck ballad or a piece of painful electronic music to  express anger at bullies. If guns aren’t as common in your life as a fork and knife, you’re less likely to consider them a tool for personal use when you’re beset by social rejection. I’ve been plenty hurt and plenty mad (or angry, as my father always told me to say instead), but I DID NOT GROW UP WITH GUNS and therefore no matter how oppressed I felt as a bullied grade school student or an unpopular teenager or an unhappy young wife or a depressed new mother, I never thought of harming myself or others with a gun.

When I thought of harming myself, I considered doing it with a tool in common use in my life. I’m posting this a month after Newtown and not too long after a young man walked into a classroom in California to shoot at kids who bullied him. It’s been a day since the President announced his new initiatives for gun control. Gun enthusiasts are going wild on the Internet. The NRA is bringing the President’s children into it. Conspiracy theorists compare the President (again) to Hitler. I have one thing to say to them: We need guns to be categorized as something a little less ordinary, acceptable and available; they should not be as expected in everyday existence as a knife and fork.