This episode is an exploration of deafness away from a loss of hearing to a hearing faculty and a practice of attuning to the harmonic sounds of everyday life that travel in between shortcomings of contemporary urban soundscapes. Joining us on the show is Alison O’Daniel. Alison is an Assistant Professor of Film at California College of the Arts in San Francisco, a visual artist and a filmmaker working around sound, moving image, sculpture, installation and performance. She has screened and exhibited in countless galleries and museums both domestically and internationally. These include Hammer Museum, Los Angeles; Garage Museum of Contemporary Art, Moscow; Centre Pompidou, Paris, France; Centro Centro Madrid, Spain; Renaissance Society, Chicago; Art in General, New York; Centre d’art Contemporain Passerelle, Brest, France; Tallinn Art Hall, Estonia; Bemis Center for Contemporary Arts, Omaha; Shulamit Nazarian, Los Angeles; and Samuel Freeman Gallery, Los Angeles. The Tuba Thieves, an ongoing film project, explores how high school students listen and hear when one of the main instruments in their marching band is missing in response to a rash of tuba thefts that occurred between 2011 and 2013 from high schools across Southern California. Alison shares with us a riveting story about how the making of the Tuba Thieves led to the discovery of a barn-like concert hall in the green, hilly mountains of the Hudson Valley area where a pianist once sat in front of the piano for 4 minutes and 33 seconds without pressing any key. Watch the teaser for the Tuba Thieves and an excerpt of the 4′ 33″ scene. Make sure to follow Alison’s instagram handle to stay up to date on her future works. Read about her past works as well such as the installation at a former chapel of a German monastery which in the form of a colorful carpet captures the feeling of hard to hear and the transcript of an interview about Tuba Thieves that Alison conducted with Anne Ellegood . 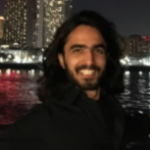 Sher Afgan Tareen is a historian of American Religious History. He specializes in the study of religious emotion, with a particular focus on an ethic of responsibility (also known as amaanah) towards the educational well-being of children that is spurred by a feeling of compassion (also known as rahma) flowing from God (li-llah). He is currently writing about the history of the North American Islamic School Movement, framing it as a product of progressive era reforms around childhood that decolonizes motherhood from a pathology of urban decay to its cure.