As we reach the conclusion of the current Series, Amanda and Sher take a deep dive into the thematic framework for binding the previous eight episodes: synthetic religions. Tune into to hear about the story behind the term, works such as Christopher Preston’s The Synthetic Age & Catherine Albanese’s Nature Religion in America that inspired its fruition, and memorable moments in conversation with our guests that enriched our understanding of synthetic religions as a conceptual tool for disrupting the binary between nature and culture that has long sustained the disciplinary boundary between the STEM sciences and the humanities and exploring the synthesis between the two. How might theorizing religion as a potent force that materially transforms nature as opposed to a private affair or worse a relic from the past with merely symbolic value demand its scholars and practitioners alike to reevaluate how much power they can exercise in the realm of politics and civic engagement? What would higher education look like if religion was no longer pit against the study of science and technology but on the contrary studied as the synthetic assemblages which sustain the promise of life amidst fears of extinction? What does our imminent future look like if imagined through the lens of synthetic religions and how might it slow our experience of time? Join us as we broach these broad questions while asking what is ‘synthetic religions?’ 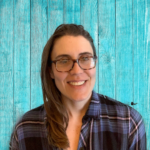 Dr. Amanda Furiasse, PhD, is an Assistant Professor of the Digital Humanities in the Department of Humanities and Politics at Nova Southeastern University. She is also Co-Founder of the Religion, Art, and Technology Lab and a 2021 Public Scholarship Fellow at Sacred Writes. Her work converges around the study of Biotechnology, Public Health, and Indigenous Religions with a particular focus on African Indigenous Medicine.