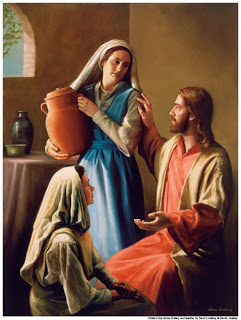 Last week I sat supping tea, on a glorious summer’s day, in a garden with one of my favourite people in the world. My friend raised one of those questions about women as bishops which is not usually part of the narrative (certainly among those of us who treat this matter as urgent): Why on earth do women want to be bishops anyway? Her question was not prompted by any anxiety about women’s ministry or place within the church. Rather her question was prompted by concern about how bishops are ‘seen’ in the C of E, that is, about how clergy and laity behave around bishops.

“Faith is the womb that conceives this new life, baptism the rebirth by which it is brought forth into the light of day. The church is its nurse, her teachings are its milk, the bread from heaven is its food.” Gregory of Nyssa’s words are both beguiling and poetic, but in my own urban context, those who bring their children forward for ‘baptism’ often seem to understand it through two, less theologically nuanced notions…

“Dazzling Darkness” by Rachel Mann: The Personal is Political

Living the Apostolic Life in a Compromised World: The Politics of Mark 10:17-31

Actually Jesus invites folks of all political and religious persuasions to a kind of humility. The human heart has, despite itself, a king of genius for corruptibility, no matter what rituals or traditions we make for ourselves. There is only one hope: to begin to see ourselves aright. And that is done by being in relation with God. This does not lie so much in the feel-good individualistic transformations beloved of conservative evangelicals, but in the challenging praxis of being part of a community of hope and forgiveness….

For those of us who are inheritors of the Judeo-Christian tradition the word ‘bread’ crackles with connotation. Out of the simple truth that bread is one of the traditional staples of human living, endless symbolism flows: Bread can signify our basic human need for nourishment, it can act as a sign of the work of human hands and so on. Bread can be torn, scattered and gathered and, even in Rowan Williams’ poem Emmaus (quoted above), made to thunder. If some might treat ‘bread’ as a tired, overworked metaphor it also takes us to the heart of the Christian faith. The bread of the Eucharistic feast is no mere sign, it is sacrament….

A community which still seeks to value the damaged, lost and, yes, even the depraved enough to want to not only punish wrong doing but seek to reform individuals and redeem communities; to not simply take individuals who are seen as a canker and turn them into sausage meat.