A shared history begins to explain how in the 1960s, Latin American, feminist, and
black radicals, both Catholics and Protestants, simultaneously and independently arrived at a
common conclusion.

The history of liberation theology offers key insight into contemporary political culture by revealing religion’s ambivalence toward the structures of the modern state and its vitalist possibilities. The first generation of liberation theologies of the late 1960s carried forward the theo-political conflicts of the Reformation and anticipated today’s tensions between Christians on the left and right over the meaning of the kingdom of God. Latin American and U.S. feminist and black theologies were the beginnings of a global wave of modern contextual theologies: from Minjung theology in South Korea, ridiculed by the sociologist Peter Berger on the pages of The American Interest as “liberation theology with chopsticks,” to Dalit theology in India. While Christian missions had served as a tool of domination, such ambivalent encounters also unleashed a revolution against oppression.

Western theology forged by elite white men provided support for domination because it regarded spiritual and political freedom as unrelated or even irreconcilable—one could be free in spirit and remain in political bondage. After its initial interventions liberation theology suffered the casualty of waning radicalism and the rising and virulent neoliberalism of the 1990s. Slowed, but not deterred, it continued to grow as victims of the unfulfilled promises of liberalism cast off the patient waiting for otherworldly freedom often offered by religion.

Since the 2013 election of the Argentine Pope Francis, liberation theology continues to be popularly associated with Latin America and Catholicism, obscuring a more complex history. In my new book, The World Come of Age: An Intellectual History of Liberation Theology (Oxford University Press, 2018), I set out to uncover that history. The liberationist idea that a theology worthy of recognition could arise from the everyday experience of those oppressed by political and social systems is a singular product of the American hemisphere. Its origins run as a parallel stream of religious thought among oppressed people in the situations of conquest of native people, colonialization, democratic revolutions, and the rise of U.S. imperialism.

The resurgence of radical and revolutionary movements that beset the Americas in the 1960s was the culmination of long-deferred expectations. As products of the European Enlightenment, elite nation builders embraced reason and freedom and sought to establish new republics free from traditional hierarchies and communities. The revolutionary waves that began with the British colonies and spread south marked the Americas as distinct from Europe. From inception, slavery and the subjugation of native people and women, underwritten by religion, contradicted the vision of nations of free people and universal brotherhood.

As the U.S. grew in imperial power in the twentieth century, with Latin America under its influence, it continued to check the realization of equality among racial minorities and women within its borders. In the gap between the rhetoric of liberal freedom and the reality of subjugation, those marginalized owing to race, class, or sex differences found that religion was a source of both oppression and vital energy for resistance.

This shared history begins to explain how in the 1960s, Latin American, feminist, and black radicals, both Catholics and Protestants, simultaneously and independently arrived at a common conclusion. Renewed political resistance implicated a theology that had worked as a legitimizing force of a liberal, yet exclusionary, social order. A new view of God was needed. Theologians radicalized by political and social movements would join in the revolt and remake theology from below.

Recovering the history of the Americas and liberation theology offers the opportunity to question theology’s adaptation to both liberal and authoritarian political environments. Liberation theology crossed paths with the ideas of individual piety, nationalism, social Christianity, Christian realism, and the political left and right. Understanding its origins clarifies how theologies have accommodated an expanding liberal order delivering not freedom but oppression for most of the world’s people.

The critiques made by liberation theologians triggered a renaissance in political theology. New debates ensued among theologians, political philosophers and social scientists on whether religion could remain as a private concern. For many, the separation of the religious from the political was settled centuries ago, and the renegotiation of the long-standing truce between the political and the theological appeared as a threat to the forward march of secularization. The cordon sanitaire between theology, which was concerned with explicating divine transcendence, and political philosophy, which was concerned with arrangements of power, was no longer secure.

Understanding the precursors to and ramifications of liberation theology sheds light on the nature of the problem of relating the theological and the political, the sacred and the profane, and the persistence of oppression among promises of freedom. It explains the ideological wall that attempts to separate notions of the divine from worldly arrangements of power. These untenable divisions sent ordinary people to the streets and into the halls of power advocating for a myriad of conflicting religiously inspired social visions of the left and right. It’s clear that there is not one agreed-upon definition of the kingdom of God and liberation theologians inadvertently unleashed religious vitalism in a torrent of opposing visions for society. 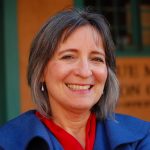 Lilian Calles Barger is an intellectual and cultural historian working as an independent scholar in Taos, New Mexico and received her Ph.D. from the University of Texas at Dallas. She came to the United States as a child immigrant from Argentina. Her book The World Come of Age: An Intellectual History of Liberation Theology was published by Oxford University Press (2018) and she has written two previous trade books on women and religion. She is currently researching the history of feminist thought and the gender revolution and considering the role of theology and religion in that change. @lilianbarger