…there is another way in which human judgment often aspires to God-likeness: when it seeks to control the future course of events, preventing future evils, rather than merely rectifying existing wrongs.

Of course, there is a plausibility in this aspiration, since prudence is one of the essential political virtues, and prudence is above all concerned with weighing future consequences, with planning and forethought, with mitigating foreseen harms and maximizing prospective benefits. But prudence, in the scheme of cardinal virtues, must remain always the handmaiden of justice.

Warning: The following post contains spoilers for the films Looper (2012) and Minority Report (2004).

In a series of posts last summer on Christopher Nolan’s Dark Knight trilogy, I suggested that although idealistic political crusaders and revolutionaries are always seduced by the temptation to aspire to God-like judgment that will set everything right, human political judgment must always accept its finitude and provisionality.  It cannot attempt to do away with all evil, but must content itself with a relative righting of wrongs within the confines of this world.  But there is another way in which human judgment often aspires to God-likeness: when it seeks to control the future course of events, preventing future evils, rather than merely rectifying existing wrongs.

Of course, there is a plausibility in this aspiration, since prudence is one of the essential political virtues, and prudence is above all concerned with weighing future consequences, with planning and forethought, with mitigating foreseen harms and maximizing prospective benefits.  But prudence, in the scheme of cardinal virtues, must remain always the handmaiden of justice, and justice is limited to consideration of objective rights and wrongs that have been done or are being done.  Without subordination to justice, a politics of prudence degenerates into naked utilitarianism, in which the avoidance of future harms becomes a justification for any pre-emptive action in the present, regardless of considerations of innocence and guilt. 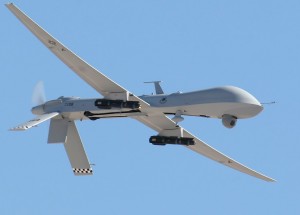 Although it is capable of more charitable readings, the recently leaked Department of Justice memo on drone strikes contained passages that hinted at such a method of reasoning, particularly in its redefinition of the concept of “imminence.”  The memo stated, “the condition that an operational leader present an ‘imminent’ threat of violent attack against the United States does not require the United States to have clear evidence that a specific attack on U.S. persons and interests will take place in the immediate future.”  Waiting “until some theoretical end stage of the planning for a particular plot would create an unacceptably high risk that the action would fail and that American casualties would result.”  In other words, if we have good reason to think that someone might attack us in some way somewhere, we should attack them (and any unfortunate innocents around them who happen to be “collateral damage”) first to avert future harm to our citizens.

It is within the logic of self-defense that concern for prudence runs the greatest risk of trampling on considerations of justice.  Again, there is a prima facie plausibility in the concept of pre-emption in self-defense—one needn’t wait till one has actually been shot to fire back at an assailant, if he is clearly in the process of attacking.  But how far back can one take this pre-emption?

Science-fiction films are an excellent vehicle for reflecting on such ethical dilemmas, because they pose for us the question of how we might act if technology allowed us the kind of God-like insight into the future to which we continually aspire.  Spielberg’s 2004 Minority Report invited us to evaluate a futuristic “pre-crime” law enforcement program which relies on the foresight of “pre-cogs” who predict murders, allowing officers to apprehend and incarcerate the would-be criminals before they have committed their crimes.  Our initial moral discomfort with the injustice of punishing people for things they haven’t done is confirmed as the film goes on.  The protagonist, accused of a murder he will commit and determined to prove his innocence, finds himself confronted with the would-be victim, and given every motivation to kill him, but refuses, realizing at the key moment that he remains free to choose his own actions, to do otherwise than he might have done.

The Terminator films pose a similar dilemma, though in more nakedly utilitarian form.  Here, the future harm to be averted is so immense—the extermination of humankind—that it might seem to justify even the killing of an innocent in the present.  In Terminator 2 (1991), Sarah Connor is ready to kill Miles Dyson, the inventor of the technology that will lead to “Judgment Day,” but although she is dissuaded, the logic for rejecting this course of action is not quite clear.  On the one hand, we are told, similarly to Minority Report, that there is “no fate but what we make,” but in this film, the openness of the future seems to Sarah Connor to provide justification for any kind of action in the present that might avert impending evils.  On the other hand, the Terminator series as a whole undermines this maxim, showing that “Judgment Day” will happen, no matter what.  In the end, there is no point in killing Dyson, because the inexorable future doom will find a way of happening anyway.

One of the cleverest recent sci-fi films, Rian Johnson’s Looper (2012), blends the dilemmas of Minority Report and Judgment Day.  In the film, Joe, who was trained as an assassin around 2040, but who reformed and found love and a life worth living about thirty years later, transports himself back in time when his wife is killed by an ascendant and seemingly all-powerful global crime lord, “The Rainmaker.”  His goal: to find and kill the five-year-old boy who will be “The Rainmaker”; he has information that narrows it down to three possible targets.  Unlike Dyson, this boy is not merely an inadvertent engineer who sets in motion a disastrous train of events—he is the agent of these future evil acts.  And the film complicates the morality of the situation by revealing that he, Cid, is not your ordinary innocent five-year-old boy—the shadow of the future “Rainmaker” already lies on him.  In a number of ways, Looper could be read as a reductio ad absurdum parable of drone warfare: a future threat has been identified with considerable precision, a threat who can be expected to kill thousands of innocents; technology enables us to get to him before the threat becomes immediate; the assassin is pursuing a surgical strike, but of course there will be some “collateral damage”—the other two five-year-olds who are not “the Rainmaker,” and as it turns out, Cid’s mother Sarah, who stands between him and Joe at the climax of the film.  And, like the tragedy of modern counter-terrorism warfare, Looper reveals, at this climax, the very real possibility that it is in fact the pre-emption that will create the threat.  Just as the killing of innocents in drone strikes leads ordinary teenage boys to head off to terrorist training camps, it is suggested that Joe may kill Sarah while Cid escapes, angry and traumatized, brooding on the need for revenge, the need to fight violence with violence.

As with Minority Report, then, Looper invites us to reflect on the irreducible contingency of human action, the fact that the future, even for those who seem set in their ways on the path to evil, is not fixed.  Mercy, love, and self-sacrifice have a transforming power that can reshape the future, whereas pre-emptive judgment that seeks to take the wheels of history into our own hands will merely set in motion a self-perpetuating cycle of violence.

Of course, this does not provide the final answers to the dilemmas that face us concerning the proper exercise of judgment and prudence in a dangerous world.  There is a such thing as a just war, but if the concept is not to become infinitely elastic, we must remember to limit ourselves to the essentially retrospective character of human judgment.  The foggy future may summon us in prudence to actions of preparation, but not to the final, irrevocable actions of lethal force.