The special issue of Political Theology (Issue 22 Number 3) collects four exemplary contributions that showcase the interdisciplinary breadth of political theology done by and about Mennonites. The Mennonite tradition and its Anabaptist background have been small but influential players in the drama of 21st century political theology, being most powerfully represented by John Howard Yoder – the author of an influential book called The Politics of Jesus who sexually abused dozens of women over decades in ways he sought to theologically justify.[1] In recent years many contemporary Mennonite political theologians have moved away from Yoder’s work while searching for resources within the tradition to both reckon with the systemic problems that permitted his pattern of sexual abuse and carve out a future for the discourse that both moves beyond and works through its traumatic and ever-returning past.[2]

Drawing on a variety of sources, the contributions in this special issue provide four snapshots that showcase how the Mennonite tradition continues to theorize connections between theological and political realities and concepts. At various points in their work the authors of these essays engage in social critique, constructive theology, literary criticism, and feminist analysis. But rather than fix upon a singular expression of Mennonite political theology that would serve as a paradigmatic example of how the discourse ought to be defined, and rather than retreat entirely from articulating distinctive ways that Mennonites can contribute to the wider conversation on political theology, I suggest that a key Mennonite identity marker is and remains its emphasis on peace and justice and corresponding approach to the critique of violence.

A major defining feature of the feminist, Christian, literary, secular, and historical Mennonite political theologies articulated in this issue is a unique critique of violence that not only rejects corporeal and material violences like murder and war, but further challenges epistemological and ontological forms of violence that inhere in language and knowledge.[4] For example, the contributors to this issue understand patriarchy, heteronormativity, polarization, and middle-class apathy to be forms of violence that span artificial divisions between mind and body. As these essays attest, many influential Mennonite political theologians have sharply critiqued uses of force and coercion within rhetorical, methodological, and metaphysical categories. Knit together by their shared identities and sources in and around the Mennonite tradition, the following essays challenge uses of violence, force, power, and coercion, within the conceptual, narrative, and persuasive means by which conversations are conducted.

This critique of violence is present in various ways throughout the Mennonite tradition and its Anabaptist history. The global breadth of Mennonite histories and identities is far more diverse than I can account for here. Interested readers will find that some of the best resources for understanding global Anabaptism come from the Global Mennonite History series published by Pandora Press, the work of Goshen College’s Institute for the Study of Global Anabaptism, and the Mennonite World Conference. But because this special issue is primarily concerned with scholarly and academic expressions of Mennonite identity in North America rather than social and global manifestations of Mennonite identity, I will limit myself to a brief summary of the tradition.

The Anabaptists of the sixteenth century were defined by their insistence on more radical and urgent reforms than those of the mainline Lutheran and Reformed traditions. Being part of what historians have called the “Radical Reformation” or “Left Wing of the Reformation” – categories which have since been complicated[5] – most Anabaptists refused to use the sword or swear oaths, and instead of baptizing their children into the Catholic church-state establishment, they insisted on baptizing only consenting adults.[6] This earned them the derogatory epithet “Wiedertäufer,” which referred to their re-baptizing of adults upon confession of faith. The Anabaptists considered infant baptism to be illegitimate, and because of their rebaptizing activities both Catholic and Protestant authorities punished them by committing countless acts of torture and violent killings, resulting in a long martyr tradition.[7] As with most religious identities, the sixteenth century Anabaptists were a diverse group that arose from many sources and locales, and as Elizabeth Phillips points out in her chapter “Anabaptist Political Theologies” in the second edition of The Blackwell Companion to Political Theology, the Anabaptist tradition defies the desire for a summary presentation of its true or essential expression.[8]

So too with the Mennonite traditions that trace their lineages to the sixteenth century Anabaptists. Contemporary Mennonites – who take their name from the Dutch Anabaptist figure Menno Simons (1496-1561) – receive and interpret their Anabaptist history in a variety of ways. Starting in the 1940s a recovery and reinterpretation of the original Anabaptist vision was initiated by Harold S. Bender, who defined the tradition by its emphases on discipleship, brotherhood, and nonresistance.[9] In the intervening years, Mennonite theologians have moved from the principle of nonresistance toward an emphasis on peace and justice, and since the 1970s the Mennonite theological tradition has understood itself to be political, but in a complex sense.[10] For some influential Mennonite theologians like Yoder, the church ought to consider itself to be a counter-political body that witnesses to but remains separate from the state, but for others like A. James Reimer or J. Lawrence Burkholder Mennonite political theology can take the form of direct normative engagement and entanglement with civil, public, and political institutions.[11]

However, the aim of this special issue is to point even further beyond the categories that have so far defined the discourse on Mennonite political theology, and toward exciting new interdisciplinary ventures. Over the past several years my work has been on the secular, literary, political, philosophical, and feminist voices in and around the Mennonite tradition who are uncapturable by Christian categories and anxieties, and instead embody a sort of Mennonite humanism or existential Anabaptism.[12] Elsewhere I develop a counter-history of these figures that resources them for the purposes of a “secular Mennonite social critique,”[13] but here I will point to two conversations that challenge bounded interpretations of Mennonite political theology. For example, in the 2000s and 2010s Mennonite theologians began to use the works of continental philosophers to elucidate their claims, leading to a philosophical turn in the discourse that emphasized a pacifist approach to epistemology and an ontological understanding of peace.[14]Under these terms, Christian theological pacifism was transformed into an approach to knowledge and metaphysics that condemns not only the violence of war and murder, but also coercion and the possessive will to dominate others by discursive and linguistic means.

Concurrently, over the past several decades a growing conversation on “Mennonite/s Writing” has provided space for Mennonite-related literary expressions that are not confined to confessional boundaries. Through writing and reflection on Mennonite themes and topics by those who are both within and beyond ecclesial bounds – post-Mennonites, Mennonots, near-Mennonites, non-Mennonites, and so on – the Mennonite literary conversation has become one of the most active discourses by and about Mennonite identities, and it has intersected with political theology in some interesting ways. Following Grace Kehler and Travis Kroeker, I see significant connections between Mennonite political theology and the literary works of secular Mennonite authors like Miriam Toews, whose recent book Women Talking provides a complex and layered feminist respond to the problem of sexual violence.[15]

Political theology continues to struggle with its violent and traumatic history, from theocratic conjugations of theology and state power to the fascist affiliations of foundational figures like Carl Schmitt. For Schmitt, the distinction between friend and enemy is central to politics, as is the secularization of modern state concepts. However, the task of disentangling the politics of enmity from the history of political theology is nowhere near complete, and Mennonite political theology – especially in its desire to deconstruct and challenge the friend-enemy distinction – is well-situated to assist in identifying and critiquing the coercive and violent categories that endure within political theology.[17] The essays that follow provide a glimpse into several developing conversations in the discourse on Mennonite political theology in ways that challenge enmity and point toward new forms of community.

I consider political theology, and by extension Mennonite political theology, to be at its best when it is interdisciplinary, pluralistic, and critical. Whether they are theologically situated or proceed from secular forms of life, or otherwise, the Mennonite values of peace and justice are sorely needed in our world of violence. Indeed, part of the peaceable world that Mennonites seek is one in which communities are defined by nonviolent resistance to injustice and are upheld by acts of mutual aid. If contemporary critical theory is any indication, these themes are receiving more widespread attention for very real reasons, from the rise of right-wing violence to the COVID-19 pandemic.[18] In the context of these persistent social and political problems, the essays to follow provide visions of a better world that challenge many forms of violence and point toward new horizons.

[2] See the two recent collections Recovering from the Anabaptist Vision and Liberating the Politics of Jesus, and Guenther Loewen, “After Yoder.”

[4] For a detailed analysis see my “Ontologies of Violence,” Ch. 2.

[6] See The Schleitheim Confession, and for a fuller historiographical picture Driedger, “Anabaptism and Religious Radicalism.”

[11] Compare Yoder, The Politics of Jesus, with Reimer, Toward an Anabaptist Political Theology and Burkholder, Mennonite Ethics.

[17] See Gingerich Hiebert, The Architectonics of Hope, and Kim Sun, Who Are Our Enemies and How Do We Love Them?

[18] See Spade, Mutual Aid and Butler, The Force of Non-Violence. 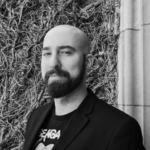 Maxwell Kennel is a Ph.D. candidate in the Religious Studies Department at McMaster University. In the Fall of 2021, he will join the Department for the Study of Religion at the University of Toronto as a Social Sciences and Humanities Research Council Postdoctoral Fellow. He is the author of Postsecular History: Political Theology and the Politics of Time (Palgrave Macmillan, forthcoming November 2021), and his dissertation “Ontologies of Violence” uses violence as a diagnostic concept to analyze Jacques Derrida’s “Violence and Metaphysics,” Mennonite pacifist epistemologies, and Grace M. Jantzen’s trilogy Death and the Displacement of Beauty. He has published articles on time and history in Studies in Religion / Sciences Religieuses, Political Theology, rhizomes, and Telos, and articles on Mennonite topics in Literature & Theology, the Mennonite Quarterly Review, the Journal of Mennonite Studies, and Hamilton Arts & Letters. For more information, visit https://maxwellkennel.ca