The theological and the political, Jacques Derrida argues, intertwine most radically at the sovereign boundary between life and death. As such, attending to what goes on there is itself a matter of life and death, a task of utmost importance. Delivered over the period of two academic years (1999–2001) at universities in Paris and the United States, Derrida’s seminars on the death penalty, recently published in English, take up matters of life and death by attending to the “political theology” at work in the death penalty – “the religion of the death penalty … the religion always present at the death penalty … the death penalty as religion.” As with so much of his work, Derrida’s seminars invite not only further reflection, but participation in the work of deconstruction, which is to say the work of justice. Toward that end, the essays collected in this issue of Political Theology engage Derrida’s Death Penalty seminars from a range of disciplinary perspectives. Its authors trace Derridean threads in pursuit of an alternate, non-sovereign political theology; they weave Derridean threads into a frame for understanding Derrida’s larger project and the world it analyzes; they join Derrida in thinking the complexities of self-preservation; they read Derrida’s critiques of abolitionism in relation to the political theologies at work in abolitionism’s more contemporary manifestations; and they elaborate upon Derrida’s work to theorize whiteness as a mode of theologico-political transcendence undergirding carceral death penalties.

For Agata Bielik-Robson, Derrida’s deconstruction of the sovereign political theology of the death penalty and its pursuit of an “unscathed” life beyond life does not signal an absolute rejection of theology or religion. Rather, she argues, joining Derrida in dismantling sovereign scaffoldings that uphold the death penalty clears space for the possibility of “another political theology,” a horizontally messianic “religion of the finite life” that both accepts and protects finite life in all its precariousness. In so doing, Bielik-Robson helps us imagine a religiosity that is more a resource for resistance than a deployment of death.

Gil Anidjar demonstrates that instrumentality is a central concern not only in Derrida’s Death Penalty seminars but throughout Derrida’s work as a whole. From his focus on writing to his focus on matters of life and death, Derrida draws our attention to the tools and technologies at the center – as opposed to the periphery – of Western thought and society. Derrida’s study of the death penalty, then, is a study of those weapons – the means of death and destruction – that so thoroughly shape our thought and world. Thus, besides discerning a trajectory that spans Derrida’s larger project, Anidjar shows how a political theology of weapons would be an undertaking not supplemental but fundamental to any consideration of the societies that wield and deploy them.

Peter Capretto takes up the question of “defense” in both its psychoanalytic and political registers within Derrida’s Death Penalty seminars. Illuminating how the law of retaliation structures both psychic and political modes of self-preservation, Capretto urges abolitionism toward a more rigorous and honest discernment of the capacity of the theologico-political to persist beyond its apparent deconstruction. In so doing, he follows Derrida in pursuit of an abolition more finely attuned to the complexities of quests for life’s preservation, particularly around the possibility and necessity of defending victimized peoples’ right to defense.

Central to Derrida’s critique of death penalty abolitionism is that it relies upon the same sovereign political theologies it opposes. Vincent Lloyd reads this critique in relation to contemporary abolitionism’s struggle not just for an end to the death penalty but for the holistic eradication of interlocking oppressions. Lloyd argues that while today’s abolitionists largely avoid convergence with the systems they oppose, they nevertheless still work from a secularist frame that hinders discernment of both the theological dimensions of oppression and the political theologies of the abolitionism that precede today’s radical social movements. Attending to such political theologies, Lloyd suggests, would allow us to extend Derrida’s project by linking grassroots movement with ideology critique in a way that supports abolitionism’s political-theological struggle for another world.

Finally, Andrew Krinks reads Derrida’s seminars in relation to the “whiteness” that structures U.S. carcerality. Elaborating upon Derrida’s conception of the theologico-political, his essay theorizes whiteness as a mode of theologico-political transcendence: whiteness both comes to be conceptually via theological reasoning and materially mimics or approximates aspects of the world-ordering traits of divine power. Extending Derrida’s fruitful theorization beyond capital punishment and its strictly sovereign configurations, he argues that carceral death penalties more broadly conceived should be understood not just as a matter of isolatable sovereign decision on life and death, but also as the (white) power to arrange the world in ways that determine proximity to life and death.

“Only a theologian … can understand the law,” Derrida said in an early death penalty seminar session, commenting on the work of Carl Schmitt. “One must be a thinking or informed theologian to understand modern politics, and therefore what sovereignty is, what the law is, what the state is, what jurisprudence is.” The essays in this special issue are case studies in such a claim. While not every contributor would consider themselves a “theologian” – just as Derrida did not – each, like Derrida, nonetheless recognizes that concepts and worlds forged by the conjoining of the theological and political must undergo critical analysis. Such analysis, at its best, enables us to make sense of – and perhaps even to transform – the matters of life and death that surround us. 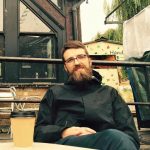 Andrew Krinks is a doctoral candidate in Theological Studies at Vanderbilt University. His research and publications lie at the intersection of political theology, social ethics, and mass incarceration. In connection with his scholarly work, he engages in community organizing and education focused on racial justice, incarceration, and policing.