These essays reflect the book of Jeremiah’s attempts to grapple with the consequences of involuntary migration, as well as the challenges faced by Christians grappling with the relationship of the biblical and theological tradition to the contemporary pursuit of justice.

The articles that comprise this special issue derive from a one-day conference hosted by the Centre for Bible, Ethics and Theology at the University of Nottingham in May 2017. The aim was to bring a theological and biblical perspective to issues surrounding involuntary (forced) migration, refugees, and asylum seekers, which collectively constitute one of the most pressing global issues of the twenty-first century. Participants were invited to address issues at the intersection of forced migration, political power, and theology, using the biblical book of Jeremiah as a springboard and conversation partner. The book of Jeremiah has its roots in the devastation wrought by the Babylonian king Nebuchadnezzar on the city of Jerusalem, in the aftermath of which its king and many of its inhabitants were deported to Babylonia. Some were held as hostages in the Babylonian court; others were re-settled in rural areas of the country as part of sprawling Babylonian development projects. Still others were left behind in the land, forced to reckon with an imperial overlord intent on extracting submission and resources from its subject territories. Many of these were uprooted from their towns and villages and relocated within Judah, while others sought refuge in neighboring countries. The book’s complex attempts to wrestle with the realities of imperial power, the devastation of war, and the challenges of multiple forms of involuntary migration offer a powerful resource for constructive theological reflection on current events.

In “The Imperial End: How Empire Overtakes Refugees in Jeremiah,” Steed Vernyl Davidson draws on refugee studies, postcolonial studies, and political theory to argue that the book of Jeremiah portrays the Judahites who flee to Egypt in terms that closely resemble our everyday understanding of refugees. More specifically, Davidson argues that the exclusion of this group from the book’s visions of the future is a critical prelude to an imperializing depiction of Yhwh’s rule in Jeremiah’s oracles against the nations, insofar as these refugees’ exclusion from the restored community facilitates its illusions of a fixed national identity. Davidson thus highlights the way in which (parts of) the book of Jeremiah speaks not from the vantage point of the marginalized but from the perspective of an (aspiring) imperial deity, whose pursuit of a new world order demands the elimination of rival claimants and an essentializing ethnocentrism. Davidson obliges us to acknowledge the extent to which we as readers are complicit in the book’s imperial turn, overlooking the pressures that produced these refugees’ flight to Egypt and condemning their efforts at autonomous self-preservation as a disruption of divine sovereignty, while translating the Babylonian migrants’ position into that of the “good” refugee, whose passivity in the face of imperial divine power guarantees them a “happy ending” in the homeland. Turning toward the modern context, Davidson suggests that the book of Jeremiah warns us of the ease with which narratives of victimhood can be co-opted and perverted for other purposes, marginalizing or excluding other groups in the process.

In “Embracing Asylum Seekers and Refugees: Jeremiah 29 as Foundation for a Christian Theology of Migration and Integration,” C. A. Strine recognizes that the Bible preserves multiple responses to involuntary migration, including some that, like the book of Ezekiel, favor the pursuit of a sectarian or ethnocentric isolationism. Alongside such tendencies, however, there are passages in Jeremiah that support a more pragmatic form of identity negotiation and a more open, engaging approach to outsiders. Strine’s argument pivots on the so-called “letter to the exiles” in Jer. 29, in which the deported Judahites are adjured to pray for the well-being of Babylon and to engage actively with outsiders, in a prophetic missive that advocates a flexible approach to tradition and allows identity boundaries to be drawn in varying, advantageous places. Drawing on extensive research in the social sciences, Strine analyzes this strand of Jeremiah as characteristic of migrant groups settled in urban contexts, before arguing that the passage offers three key principles for a constructive theological approach to migration and integration in modern Christian communities. Using the theology of embrace developed by Miroslav Volf, Strine argues that Jer. 29 places obligations on both migrants and hosts, the foremost of which is to move to embrace each other across – in spite of, and without dissolving – the enduring lines of difference between them. As proximity between migrants and hosts is required to make such embrace possible, Strine concludes that Jer. 29, together with its reception in the New Testament and later Christian thought, obligates Christians to advocate for and to actively support strategies that enable migrants to live in integrated social contexts, where engagement across enduring lines of difference can take place.

In “The Art of Wounded Hope: Forced Migration, Prophecy and Aesth/ethics,” Susanna Snyder explores the performative and visual arts as means of facilitating such engagement, developing the political and provocative aspect of contemporary art relating to migration as analogous to the characteristically confrontational aspects of Jeremiah’s prophecy. Snyder draws our attention to the way that art – both performative and poetic – can serve as an avenue of resistance for those experiencing injustice as a consequence of forced migration, paying especially close attention to instances in which this occurs in faith contexts. Snyder argues that Jeremiah aligns the performance of poetic-prophetic beauty with the pursuit of divine justice and contends that contemporary art forms are playing a similar prophetic role in relation to current migration crises, by provoking reflection on the disjuncture between beauty and reality and, ideally, prompting action toward the elimination of these fractures and the fulfillment of justice. This prophetic capacity of art derives from its ability to engage audiences emotionally, such that they are able to see more clearly and truthfully the pain and suffering experienced by forced migrants, as well as from the arts’ ability to help people visualize the positive and constructive possibilities of a world characterized by migration. Snyder concludes with a discussion of potential difficulties arising from these intersecting reflections on ancient prophetic texts and contemporary contexts, as well as reflecting on certain ambivalences that arise concerning the effectiveness of art – including prophetic art – in achieving its transformative ends.

The challenges posed by such crossing and re-crossing of contexts are taken up also in “Temporality, Dispossession and the Search for the Good: Interpreting the Book of Jeremiah with the Jesuit Refugee Service,” in which Anna Rowlands directs a tri-directional conversation between the book of Jeremiah, destitute asylum-seekers in the United Kingdom, and Simone Weil. During fieldwork interviews conducted with asylum-seekers in London, Rowlands observed a persistent significance allotted to Jer. 29 by interviewees, as part of an unprompted but strong tendency to raise issues of religious belief and faith in relation to their experience of asylum-seeking in the UK. The interviewees’ interpretations of this texts bear interesting resonances but also tensions with recent work by biblical scholars from the perspective of involuntary migration. Rowlands moves between these multiple perspectives to identify political-theological themes raised by interviewees in their articulation of the good denied them by current UK immigration policies, including deprivation of hope, dispossession of the self, and distortion of time, and to identify ways in which interviewees turn to the Bible, especially the Old Testament, to narrate their experiences. Exploring similarities and differences between interviewees’ interpretations of Jeremiah and recent scholarly work, Rowlands offers a constructive mediation of these perspectives through attention to the figure of Jeremiah, the biblical detainee par excellence, whose bodily and psychological suffering both echoes and evokes that of contemporary asylum-seekers in its dissolution and disordering of time and space. This final turn is facilitated by Weil’s analysis of the Iliad, drawing out the incongruity of subjection to force and pursuit of the good to argue that policies of detention and destitution devastate both subject and object.

The complexity and sophistication of these essays reflect the complexity and nuance of the book of Jeremiah’s attempts to grapple with the consequences of various forms of involuntary migration, as well as the manifold challenges faced by Christians grappling with the relationship of the biblical and theological tradition to the contemporary pursuit of justice. They are offered here as part of an ongoing conversation and in hope that they will serve to stimulate biblically- and theologically-informed responses to involuntary migrants, asylum-seekers, and refugees in both local and national contexts.

This essay originally appeared in our journal Political Theology to introduce the special issue 19.6 on Jeremiah and force migration. 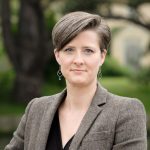 Carly Crouch is the David Allan Hubbard Chair in Old Testament at Fuller Seminary. She has written and edited work on forced migration, exile, and trauma in Jeremiah and Ezekiel. She has also published individual volumes focusing on Deuteronomy, Isaiah, and Jeremiah. Her 2014 work The Making of Israel: Cultural Diversity in the Southern Levant and the Formation of Ethnic Identity in Deuteronomy brings to bear anthropology, archaeology, and biblical studies in investigating the formation of Israelite identity.