Rather than read it prescriptively to justify my own identification as a “righteous Christian,” I now read this passage for what it is: a poem that describes the resilience of a people who found true comfort and safety in God, despite attacks from those who would cause them harm.

Happy are those who do not follow the advice of the wicked, or take the path that sinners tread, or sit in the seat of scoffers; but their delight is in the law of the LORD, and on his law they meditate day and night. They are like trees planted by streams of water, which yield their fruit in its season, and their leaves do not wither. In all that they do, they prosper. The wicked are not so, but are like chaff that the wind drives away. Therefore the wicked will not stand in the judgment, nor sinners in the congregation of the righteous; for the LORD watches over the way of the righteous, but the way of the wicked will perish.

As I meditate on this week’s lectionary reading, I cannot help but notice the difference between my body’s response to Psalm 1 now and the way that it landed for me in previous seasons of my life. By the time I get to the end of the first verse, the familiarity of the passage overtakes me and I am transported back to what it felt like for me to read this passage ten years ago. As a mere twenty-year-old, freshly recommitted to (evangelical) Christianity, I believed that this Psalm was both prescriptive and immutable, and it brought me great comfort to imagine myself and my Christian community living into the legacy of the “wise ones” today. At thirty, I’ve been through seminary, learned how to recognize systemic oppressions found within U.S. Christianity, and am currently focusing my doctoral work on minoritized people who have experienced trauma in the church. I now read and react to this Psalm very differently.

When I read the first verse again, I remember that biblical interpreters often vacillated on whether or not the Hebrew word to describe those who avoid wickedness in this Psalm should be translated as “happy” or “blessed.” Almost reflexively, my stomach knots up and I think about how widespread the word “blessed” is in contemporary U.S. culture, and how that has diluted its meaning. “Blessed” is now often a cultural signifier that adorns vanity license plates, t-shirts, and all kinds of kitsch. It is decal-ed on walls across the country. “#Blessed” is so often stamped at the bottom of social media posts that it has even become a meme in itself. One might argue that this is a harmless trend, meant to encourage other Christians to meditate on God’s goodness, but a closer look at the term—and how it functions in today’s society—reveals something a bit more insidious.

Historian Kate Bowler’s 2013 book Blessed: A History of the American Prosperity Gospel notes that prosperity-focused theologies have always been present to varying degrees across several iterations of Christianity. While “the prosperity gospel,” its most infamous iteration, is heavily scrutinized for its guarantee of “faith, health, wealth, and victory,” many Christians who do not identify within that tradition (and non-Christians, for that matter) also find the idea of a comfortable life appealing. While, to be clear, there is nothing wrong with desiring an easy life, it is concerning to note how some Christians maintain their own power and privilege at the expense of others and refer to it as “blessedness.”

The concept of “blessedness” serves to provide a strong sense of psychological comfort for the believer.  In his book Spiritual Bypassing: When Spirituality Disconnects Us from What Really Matters, psychologist Robert A. Masters asserts that this desire for comfort becomes tricky and harmful when it morphs into “spiritual bypassing.” This impulse occurs when people use their spirituality or religion as a protective mechanism in order to deflect away from life’s difficulties. In the political arena, spiritual bypassing occurs when leaders pepper their tweets, speeches, and press releases with “thoughts and prayers” immediately after preventable tragedies occur, while doing nothing to fix the harmful policies that contributed to said events. Another form of spiritual bypassing happens when leaders sidestep legitimate critiques about the oppressions in this country by reiterating Christian nationalist talking points, such as reminding the country how much God has blessed us. This intentional deflection redirects attention away from the issues at hand, causing further harm to those who are most vulnerable in this country.

As many biblical scholars or homileticians will confirm, a person or community’s interpretation of scripture depends heavily on their own positionality and cultural context. As a young adult steeped in white U.S. evangelicalism, I definitely read this passage prescriptively, patting myself on the back for being a part of a community who certainly did not “. . . follow the advice of the wicked, or take the path that sinners tread, or sit in the seat of scoffers” (Psalm 1:1). I sincerely believed that my immersion in evangelical culture, investment in Christian signifying, and personal spiritual practices were modern-day examples of “delighting in God’s law,” and was taught that leaders who shared the same worldview as we did were “righteous.” This led me to read the rest of Psalm 1 as if we evangelical Christians were the blessed ones, rooted like the tree by the river, bearing good fruit, and without a care in the world.

I read Psalm 1 now and I cringe. Not only do I recognize my own eisegesis, but I also understand how powerful it is to relegate anyone who challenged our our theological or political convictions as “wicked.” These included so-called “non-believers,” people whose actions we judged as sinful, and those who we perceived to be too critical and divisive. Voting for legislators whose policies we heavily disagreed with was just as bad. By identifying all of these people as “the wicked,” meaning those who were neither presently blessed nor who would reap the fruit of blessedness (i.e., the comfortable life we had), it was easy for us to justify not engaging with them at all. Instead, we considered them chaff who the wind would blow away, or people who were already doomed to perish.

Little did I know that my perspective was the result of a shallow hermeneutic that was heavily influenced by my immersion in an evangelical Christian culture that had limited capacity to understand systemic oppressions or U.S. Christianity’s complicity in them. I could not recognize that the leaders I considered authoritative were invested in “color-blind ideologies,” preaching forgiveness and peacemaking while ignoring the need for repentance and accountability that makes the former things possible. These teachings encouraged us to minimize and spiritually bypass our painful lived experiences with oppression, instead focusing our energies on gently and kindly winning people over onto our side. Furthermore, I had no language back then to describe how the pursuit of being “blessed” individually and collectively meant seeking an aesthetic and lifestyle that would afford me financial stability, respectability, power and, most of all, comfort. I bought into the belief that to be a righteous Christian was to remain comfortable, to never have to reckon with cognitive dissonance, or valid critiques, or anger. It meant that I never put myself (or “my people”) in the perspective of “the wicked” and question our own complicity with injustices.”

I now read this Psalm differently. Rather than read it prescriptively to justify my own identification as a “righteous Christian,” I now read this passage for what it is: a poem that describes the resilience of a people who found true comfort and safety in God, despite attacks from those who would cause them harm. Because this Psalm was most likely written for a community of people who were at the mercy of the powerful leaders in the region, I remember that their pursuit of peace and comfort looked very different than my own. I am then reminded of the resilience that faith can bring in times of extraordinary challenges. After all, the spiritual descendants of this ancient community survived being scattered in diaspora and experienced various iterations of violence, they yet still continue to find meaning in the image of the well-rooted tree. I also think of people of color, indigenous people, LGBTQIA+ folks, and those who are experiencing poverty, sickness, and homelessness, imagining what it must be like for them to find comfort in these words. Despite interpersonal, psychological, and political violence and wickedness, that many find comfort in their faith demonstrates the lasting wisdom and comfort highlighted in this Psalm. To be able to resist the lure of spiritual bypassing, despite life’s hardships, necessitates being well acquainted with discomfort. Indeed, many people have no choice but to face these challenges head on. While people respond to life’s difficulties in a number of ways—some by doing their best to survive and find joy, and others by advocating and agitating for a more just future—all of these are examples of faithfulness. While the work of wrestling with scripture, our comfort, and our own positions of privilege and power is certainly not the easy road, it might help us redefine what it means to truly call ourselves blessed. 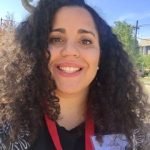 Jasmin Figueroa is a doctoral student in Practical Theology, with a focus on Church and Society, at Boston University School of Theology. As a self-described feminist diaspora NuyoRican, she is interested in the ways that minoritized communities, millennials in particular, are renegotiating their spiritualities in light of this political moment. To this end, she hopes to help contribute to new methods of culturally competent and trauma-informed spiritual care.