Earlier this autumn I was invited to speak about theological ethics, war, and peace to a United Methodist congregation in Des Moines, Iowa. At the beginning of my presentation, I held up the foundation document, In Defense of Creation: The Nuclear Crisis and a Just Peace, which the United Methodist Council of Bishops issued in 1986 “under the darkening shadows of a threatening nuclear winter” (11). I was pleased to see that some of the older Methodists in my audience remembered this document, but I was also disappointed to hear them say that, twenty-five years later, they were unaware of significant follow-up to the bishops encouragement to their “churches at every level to develop and provide adequate support for full-time ministries of peace education and action” (21). 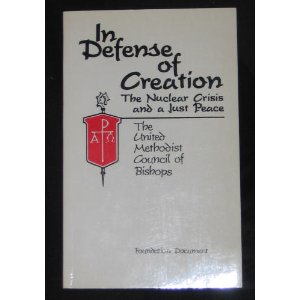 While I am a Roman Catholic (all the way back to the cradle), after my parents divorced I was “adopted” during my high school years initially by the Assemblies of God and then by the United Methodists, which is part of the reason why I studied for the M.Div. at Duke Divinity School (I also wanted to learn from Stanley Hauerwas). In Defense of Creation appeared two years prior to my arrival in Durham, and I remember reading and discussing it there, especially in light of the powerful critique of the document by Paul Ramsey (with an epilogue by Hauerwas), Speak Up for Just War or Pacifism (The Pennsylvania State University, 1988).

Even though I’m back with my Catholic tradition, I found myself wondering about what my United Methodist friends have to say on the occasion of this twenty-fifth anniversary of In Defense of Creation. Three years ago I was included in some events involving Catholic theologians reflecting on the twenty-fifth anniversary of the U.S. Catholic bishops’ pastoral letter, The Challenge of Peace, so I thought I’d invite some United Methodist theologians to share their thoughts here on war and peace in the Methodist tradition today. Happily, four have kindly responded to this invitation: Kevin Carnahan, D. Stephen Long, J. Philip Wogaman, and Nicole L. Johnson. I’ll post each one over the coming several days, beginning with Dr. Carnahan’s today.