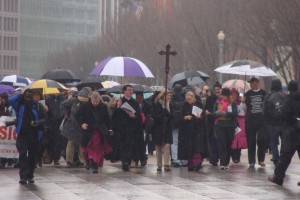 On Monday, more than 400 Episcopalians spent a few hours in cold and snowy Washington, DC, praying a modern-day stations of the cross as a public witness against gun violence. More than 20 bishops were there in their purple/magenta cassocks, and a few hundred clergy in their collars. All of the witnesses were following a large, prominent cross throughout the city, stopping to pray at the Capitol Building, Ford’s Theater, the White House, and the War Memorials, among other places. (Photo from Kevin Eckstrom via Religion News Service).

The procession actually disrupted traffic on Pennsylvania Avenue at one point, and garnered plenty of media attention throughout the journey. My friends and colleagues tweeted and posted pictures along the way. Their public witness reached far beyond the city and those who saw them on the streets. I was so proud of my church and the many friends I had among the crowd. I longed to be with them.

I have a rather tortured history with public witness and protest. I don’t come to it easily or naturally. My first public protest was ten years ago last week, when the United States began its campaign of “shock and awe” against Iraq. In the days leading up to March 19, 2003, I participated in a peace march. I joined with a crowd of about 100 people in Toledo, Ohio to participate in a candlelight vigil to pray and witness for peace.

I was ill at ease, uncomfortable, unsure. We were out there, on the public streets, with signs and candles. People saw us. I wasn’t sure what to do, or what purpose it all served, but there I was, a protester. The war started anyway, of course. Despite my unease, I was proud to have made my feelings about the war known to others who felt the same way and to the public. 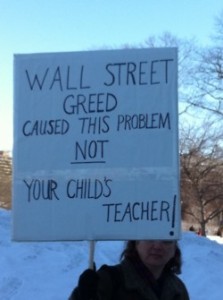 It wasn’t until February of 2011 that I attended my next protest, a rally in Hartford, Connecticut in support of unionized public workers in Wisconsin. As we walked to the rally, my friend Kate said, “I miss this! I’m so excited!”

I thought back to that peace march from 2003 and mused about the idea of missing protesting – as an activity in and of itself. I was still pretty ambivalent about it. But when we got to the capitol building in Hartford, there were hundreds of people who had come out to stand in solidarity with public workers in Wisconsin. The chants of “We are one!” brought tears to my eyes. (I took the picture at left.)

I was reminded of the power of public witness, and the feeling of standing up for a cause. No one who drove by the capitol or watched the news could fail to notice that there were people who weren’t willing to let organized labor go down without a fight.

Just a few months later, in September of 2011, the Occupy movement began. I paid close attention to my friends who were blogging about their experiences as protest chaplains. Their public witness, in the religious garb of my tradition – white albs – was striking. Their presence with the Occupiers said, “This institution hears you, and stands with you.” (That’s my friend Michael on the right.) 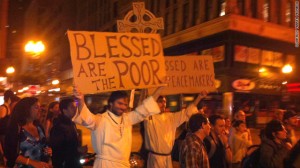 On Tuesday and Wednesday of this week, my Facebook feed has been filled with red. Hundreds of my friends (and I) are offering a public social media witness by changing our profile pictures to red in support of marriage equality as the Supreme Court hears arguments on Proposition 8 and the Defense of Marriage Act. And there are hundreds of people demonstrating in front of the Supreme Court in Washington as the justices hear arguments, making speeches, waving signs, countering hateful rhetoric with powerful public witness. My friends and colleagues are there as well and I long to be with them, too.

One might be tempted to ask what good it will all do. There have been snarky comments on Facebook about how the justices are counting up the number of red profile pictures before they make their decision. People have pointed out that Congress is not in session right now, so members weren’t in Washington to see the Stations of the Cross witness. Wall Street is still going strong and the war in Iraq not only began, but lasted for ten years.

Many would also argue that the protests don’t go far enough. My Twitter feed from Monday contained pointed questions about why there was a witness against gun violence but not against drone strikes. My more radical friends on Facebook are pointing out that marriage is not the same thing as equality, and that in a truly just world, the state wouldn’t privilege any family structure over another.

So why bother? There is always more that needs to be done and sometimes it seems that things will never change. What good is our public witness?

Getting together with lots of people and making public what many have been privately thinking for years changes the public conversation. When one person is bold enough to say, “I’m a lesbian,” when another is brave enough to proclaim, “The system is rigged,” and when those brave souls then inspire hundreds and thousands of people to be courageous along with them, it changes the conversation. And when groups of people get together and appeal to their faith as the reason for their witness, it changes the conversation about what it means to be a person of faith.

This has proven true in the conversation on same-sex marriage, for example. The Pew Forum on Religion and Public Life documents a 27 point change in public opinion in barely more than a decade. More people are now in favor of same-sex marriage than oppose it.  More and more denominations are allowing their clergy to perform same-sex weddings in states where it is legal. No one could have imagined such an outcome 35 years ago.

Public witness matters. Jesus knew it; that’s why he did most of his preaching on mountaintops where anyone could hear and see him, not in safe secluded corners to select groups of followers.  So I may look foolish in my naiveté and I will surely be criticized by those who think I haven’t gone far enough and by those who think I’ve gone too far. But I will continue to live in hope that every public witness for justice helps to bring about the kingdom of God. 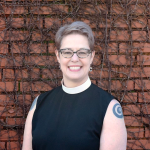