Efforts to leverage “God” are often attuned to the dynamics of the symbol yet remain largely untroubled by the gaps such acts generate.

The Pew Research Center study, “When Americans Say They Believe in God, What do They Mean?”, offers a snapshot of how “God” functions in the confessional landscape, social imaginary, and political wrangling of the U.S. It is, as snapshots can be, incomplete, flawed, yet provocative. The tensions marking the Pew study are not unique to it. Rather they reveal, I submit, challenges that need by addressed by analyses of how “God” functions in any system.

The how of “God,” of course, cannot be definitively depicted despite efforts or desires to do so. Pushes to make definite what is infinite, or at least infinitely translatable, result in a suffocating literalism. This literalism flattens human experience and limits the interpretive scope of that experience to one sanctioned frame. And in the West’s imperialistic history, such literalism crushes alternative worldviews alongside the bodies that hold them. One way to approach the how question that resists literalisms and its violence is to mind the “God” gap.

The “God” gap could entail confession, akin to Pascal’s “infinite abyss [that] can only be filled…by God” (113). It could represent the void of divinity—that there is no deity. Both are viable frames and reflective of US patterns of belief. The Pew study, according to which 80% of those surveyed “believe in God,” while 19% do not, suggests yet another kind of “God” gap. The visual depicting this difference uses two spheres, one larger than the other, separated by empty space – or, gap.

These statistics are an illustrative yet incomplete expression of the analytic frame I wish to propose. In the abyss/void or belief/non-belief example, gap stands for space apart. The confessional distance between the God-filled and the God-void is, therefore, one way to conceive of such a gap.

But this is not the only way to consider the significance of the gap. Geographically speaking, “gap” refers to “a low area between two higher-elevation landmasses.” What’s more, this area is “more rugged and difficult to navigate” than a pass.

From this definition, three elements might contribute to analyses of US intersections of “God” and politics: the distinction of low and high, the in-between nature of a gap, and the difficulty of navigation. No simple pass will be given when treading down the path of God and politics.

We will return to these three elements momentarily. But first, you might wonder: why geography as analytic lens? Two reasons. First, in the Anthropocene crisis of climate change, it is imperative to continually stress our theoretical and environmental entanglement. No theorizing exists outside the ecological. What we choose to talk about and act on effects our environment, and vice versa.

Second, whether or not one subscribes to the “geography is destiny” model of geo-political analysis, any effort to understand US voter motivation need contend with the rural/urban gap. In the last eight years of election cycles (2008-2016), Republicans have gained ground in rural areas. And geography can be more than a landed-reality. Geography, or locatedness, shapes the issues that guide voters.

What’s more, geography includes social, economic, landed, or theological locatedness. Just look at the 81% support Trump garnered from Evangelicals in the 2016 election. The “God” gap is geographical because it draws us into attention to the uneven topography of the divine in our present moment.

And this returns us to the low/high distinction of the “God” gap model.

In brief, the low/high distinction calls for examination of two possible gaps. One is a measurable distance between or among issues, as discussed earlier. The other is hierarchic ordering (whether implicit or explicit). These two gaps can exist individually or in concert.

The Pew study presents several examples of the low/high distinction at work. One gap speaks to the measurable distance in beliefs about God among Democrats. The report states that “[i]n stark contrast with non-white Democrats, [seven-in-ten or more (of whom) say they believe God is all loving, all-knowing or all-powerful]….just one-in-three white Democrats say they believe God” is all anything. The “tense ties” of religious liberals to Democratic party mechanisms is not news. Neither are the agonisms Democrats face in bringing together secular and religious voices. While certain agonistic elements are inevitable across socio-political structures, it is imperative to examine these structures to uncover bias.

The race-faith dynamics at work, for example, within the identity marker that is “Democrat” require interrogation. How might (or do) exclusions of faith reinforce exclusions of people of color? Systems of complicity must be both identified and dismantled.

The same dismantling is required of research practices that exclude. It is not until after a dozen or so paragraphs that Pew’s study, “When Americans Say They believe in God, What Do They Mean,” declares the following: “The survey did not include enough interviews with Muslims, Buddhists, Hindus or respondents from other minority religious groups in the United States to permit separate analysis of their beliefs.” Why not?

How can this be a study of Americans when significant voices are left out? This “God” gap borders on hierarchic ordering. It also denies the deep histories of diverse faiths that have contributed not only to US cultural fabrics, but also to one another’s confessions. Political- and belief-systems are necessarily communal and therefore relational, which leads us to the in-between nature of gaps.

Analyses that mind the “God” gap inhabit and explore in-between spaces. There are different types of geographic gaps—water, wind—each formed or carved out by different processes. And yet, every gap is located in-between.

In other words, gaps are embedded and relational. They cannot be surveyed except in relation to surrounding contexts and processes. In US politics, to mind the “God” gap is to examine the complex histories, personalities, languages, and possibilities informing a particular issue, belief, or event.

It is temping to narrow fields of analysis, to isolate one cause or factor as determinative, when approaching something as ponderous as say the Trump presidency. To do so, however, creates a two-fold risk: that of limited scope and single-strand extrapolation. The Trump paroxysm gripping the evangelical movement has been diagnosed as hypocrisy, plain and simple. Such a diagnosis, however, fails to explore the breadth of the “God” gap operative in this moment.

Analyses that do attend to this community’s complex histories have pointed to Trump’s ability to tap into the strategies of “a political playbook that conservative evangelicals have been employing since the 1970s” and to Trump’s “Christian tribalism” and nationalism, which not only extol Christianity but also “conflate[e] God and country.” Fuller Seminary President, Dr. Mark Labberton, delivered a particularly nuanced breakdown of the “evangelical crisis” as one that entails “many issues of power: racial, political, economic, cultural….” He continues, stating that “the apparent evangelical alignment with the use of power that seeks dominance, control, supremacy, and victory over compassion and justice” stands counter to professed beliefs.

Labberton’s reflection offers a multi-strand dissection of his community’s complicity in systems of exploitation. And though dense with confession and sparse in next-step proposals, it minds a “God” gap that is simultaneously theological, social, political, and for Labberton profoundly personal. His analysis attends to the cavernous distance between collective belief and action, to the compromised history of a movement, and to the challenge of making a way forward.

There is no simple pass when navigating US systems of politics and belief. This is particularly so in methodologies that are mindful of gaps, of hierarchic spaces, of embedded systems of oppression, of the rugged terrains etched out by diverse peoples, cultures, beliefs, and power claims. In one sense, to mind the “God” gap resonates with Quaker traditions of “Speak[ing] Truth to Power”.

As an example, consider social ethicist Miguel De La Torre’s indictment of US Christianity and call for “communities of color” to reject the “white US Jesus.” Such truth-telling and truth-activism liberates and, in De La Torre’s words, is one way to say “yes to God.”

And now, perhaps, comes the time to attend briefly to that pesky modifier—God.

“The symbol of God,” as Elizabeth Johnson notes, “functions” (98).  “God” is no mere name, title, or dream. It can be all of those things, and at the same time transcend or sabotage such markers of meaning.

To say, then, that the symbol of God to the mobilizing dynamics at play across shared (and primarily Western) linguistic and cultural systems. God-trouble arises when politicians, believers, pundits, or preachers act within reductive frames of understanding, frames that trade in flat caricatures of just what or who “God” might be. And by trouble, I mean attempts to leverage “God” as socio-cultural commodity, political power-broker, or metaphysical score-keeper.

Efforts to caricature and to leverage “God” are keenly attuned to the functional dynamics of the symbol yet remain—be it intentionally or not—untroubled by the gaps such acts generate. These gaps might exacerbate hierarchies, level out complexity in order to homogenize, or render “God” and tribes chosen by this “God” as exceptional and, therefore, untouched by communal concerns or the common good.

Indifference to the multiple functions of “God” deployed as a theological or political strategy points to a gap internal to exploitations of this symbol. This gap distances public actors from accountability with regard to their use of “God” imagery. If this particular distance is to be bridged or even explored, it is imperative to both mind and expose the layered, often reinforcing “God” gaps.

In theory, and potentially practice, a minding of the “God” gap in discussions of politics and belief resists over-simplifications. It also challenges analytic methods that exclude the voices, experiences, and insights of others. What’s more, it calls on public actors to take account of words, strategies, and symbols—and how they function. 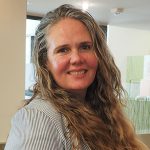 Dhawn Martin, Ph.D., is a scholar of theology and philosophy. Her work explores intersections of faith and politics, in particular, how social bodies currently do and might alternatively incarnate belief-systems. This exploration focuses on metaphors and models that potentially mobilize collective movements for change.