The familiar standards of “innocent until proven guilty” and “beyond a reasonable doubt” are meant to protect people from false accusations, but also contribute to the assumption that should doubt the stories of victims of assault and harassment, even when we know these crimes are depressingly common. The Christian preferential option for the poor, however, means that we should have a preferential option for victims, meaning that our presumption is to believe in and side with the victims of assault and harassment in the church and the public arena.

Questions surrounding whom to believe in the midst of conflicting accounts of assault or sexual harassment are at the forefront of national conversation. Prosecutors in Chicago dropped all charges against Jussie Smollett related to the accusation that he falsely reported a hate crime to police. The #MeToo movement centered the stories of women who experienced harassment, violence, assault, and other attacks upon their dignity. The Senate confirmation hearings for Brett Kavanaugh became for many a “he said/she said” situation. Dr. Christine Blasey Ford identified Kavanaugh as her attacker in an incident from their youth with absolute certainty, but Kavanaugh maintained his innocence with the same certainty. Yet naming this as a “he said/she said” dismisses the special authority we should give to the claim of the victim. The preferential option for the poor, as translated into a situation of assault or harassment with conflicting accounts, demands that we take the side of the victim.

In the United States, the criminal court standard of “innocent until proven guilty” is deeply rooted in our collective psyche. Further, the standard of “beyond a reasonable doubt” must be met prior to holding someone responsible for a crime, either in a court of law or in public opinion. Even the Title IX standard of a “preponderance of evidence,” or holding one responsible for sexual assault if there is enough evidence that it is more likely than not that the assault occurred, challenges this notion of absolute certainty. Yet all of these fall on the side of the accused. The burden of proof is placed on the victim. The standards of “innocent until proven guilty” and “beyond a reasonable doubt” contribute to the mindset that false accusations and convictions are the worst possible outcomes, worse than someone guilty of assault getting away with the crime. This line of reasoning starts with the assumption that we should doubt the stories of victims and that this doubting is an acceptable risk, since the overriding goal is to ensure that no man will be held accountable for a crime he did not commit. It prioritizes the accused over the victim, the powerful over the vulnerable.

What happens if we do not believe survivors? What happens if we side with the accused? If we do not believe survivors, then systems that silence victims continue to flourish. Systems that protect the accused over victims may be prudent for a criminal court, but are dangerous in other settings. The sex abuse crisis in the Catholic Church illustrates the dangers of siding with the accused.  Despite allegations of abuse, priests continued to remain in ministry and assault minors. In siding with the accused, victims were told their experiences, and in turn their lives, were not as important as the “good name” of their perpetrators. A system of not believing survivors of sexual assault results in a system of silence. The powerful continue to grow in power while the vulnerable are silenced and pushed aside.

As a church, we have experienced first-hand the dangerous effects of not standing on the side of survivors. We are living in the aftermath of a system where the accused and powerful were prioritized over victims. If the sexual assault crisis in the church has taught us anything, it must be that we have a moral obligation to stand with the victim. Our impulse must be to believe the victim. This is not the exception, but rather, the default position. We must make a preferential option for the victims of sexual assault.

Aligning the preferential option for the poor with the necessity to believe victims, we make a claim that believing victims is a constitutive aspect of our faith. It is not simply an application of Catholic social teaching or an action that designates one as a good citizen. Rather, it makes a claim that alignment with victims is at the core of church teaching.

Theologically, we must remember that the reign of God is not neutral. Jesus’ lived example demonstrates that we must be on the side of the poor. The liberating God of love depicted throughout scripture tells of a unique, preferential relationship between God and the oppressed. The poor and marginalized occupy a special role in the reign of God. As such, we must make the option to believe victims, the marginalized and downtrodden of our context today. This preferential option for the victims is not neutral. It is certainly controversial. It challenges systems of privilege and power. Yet, so does the reign of God. In order to make known the “already but not yet” Reign of God, we must firmly stand with the victims, whether in our own church or in the public arena. 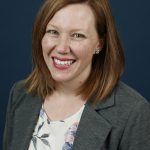 Annie Selak is a Ph.D. candidate in Systematic Theology at Boston College, focusing on ecclesiology. Prior to studying at Boston College, Annie served as a Lay Ecclesial Minister in the Catholic Church, working with young women at Catholic high schools and universities.