My hypothesis is that the enigmatic institution, both juridical and religious, that we designate with the term oath can only be made intelligible if it is situated within a persepctive in which it calls into question the very nature of man as a speaking being and a political animal…Ultrahistory is not an event that can be considered completed once and for all; it is always under way, because Homo sapiens never stops becoming man, has perhaps not yet finished entering language and swearing to his nature as a speaking being. – Giorgio Agamben

I read someone that said “the challenge of modernity is to live without illusions and without becoming disillusioned.” If this is the case, then my thinking is that “the challenge for post-modernity is to live within illusion without necessitating an object for disillusionment beyond it.” This is not to say that I am in favor of pretending that things have meaning when, in fact, I believe they do not. But, rather, that the ‘missing piece’ of human epistemology, philosophy, cultural valuation, etc. actually does exist; however, its existence is not something to be found by way of searching through new avenues of thought. The difficult part with pinpointing its location lies in the fact that it has already been obtained even before the search began, indeed it prompted the search: the ‘missing piece’ is itself a piece.

An example for how this works out is seen in the issue of language. Language is intricately tied to notions of any kind of interactivity; there could not be a social body without language or language without a social body. Language, here, is not being restricted to writing and speaking but also including gestures, significant action, art, etc. Why has language been treated as an authoritative construct throughout history? It is as if beyond language there was some crucial or central core to the system of language – a core that not only represented itself, but also expressed something beyond its own capacity. I find that the inverse is more interesting and more beneficial for postmodern theology. Language forms not because there was a critical necessity or a bond that was formed, but because humanity recognizes an inability or internal separation. Here, the illusion of language is not that humanity is building something that will be able to ‘get to the bottom it’. No, the illusion that must be lived in languages is its intrinsic ability to hide the fact that something is being covered up: namely, a gap.

What would happen if, in marriage, the necessity of vows were not inherent in the process? Would it be less surprising if a couple ‘divorced’ even though no official language was exchanged? Would it then not even be possible to recognize the separation as a divorce at all? In court, what would the process look like if the power of the communal-collective ‘sacred oath’ were utterly unfamiliar? Is it not strange that, when a person takes it upon themselves to steal, rape, or murder we assume that, even though the law and social-consciousness did not prevent the crime, the power of a few words are enough to suffice for truth? The unity that is formed between people by speaking a ‘sacred’ word is granted a power as deep as myth. Similarly, in the Sermon on the Mount, Jesus’ “antithesis” (Matt. 5:17-48) address central concepts of religious and political practices. For example, v. 33-37:

“You have heard that it was said to those of ancient times, ‘You shall not swear falsely, but carry out the vows you have made to the Lord.’ But I saw to you, do not swear at all, either by heaven or by earth, for it is God’s footstool…And do not swear by your head, for you cannot make one hair white or black. Let your word be, ‘Yes, Yes’ or ‘No, No’; anything more than this comes from evil.”

Beyond the perspective shift that Jesus demands in the beatitudes, the antitheses border on conflating the sacred and the profane: the second command does not cancel the original; it exceeds the first’s expectations and – this is the crucial point – it assumes that no situational obligations will demand the expectations.

Why would Jesus suggest a life without Oath?

The oath is a central concept for juridical and religious transactions. For the former, Oath validates the truth of a claim; for the latter, Oath makes a claim to validate truth. It is also the pinnacle of human representative linguistic ability. One’s actions are integral to one’s language and individual’s actions create the public’s syntax (and vice-versa). In a roundabout way, Jesus shows that simple human actions are actually profound: “Yes” or “No” suffice for and supplant an oath: Jesus’ antithesis turns ideal “righteousness” into vulgarity. I do not believe that Jesus’ ethic teaches the abolition of the oath, but omni-realization of it – life as Oath: life as an allegiance to alienation. Is this not a central element in Christ’s action on the cross? Jesus’ ethic teaches us to realize ourselves completely before God and others: “Yes/No” are proof enough, but the alienation of language is not optional. This is the gap of alienation put into practice: in negating the very need for the oath, Jesus maximizes its potential, thereby asserting a deep bottom-line for the gospel. Every moment – even the vulgar – is potentially holy.

What happens when this demand is interrogated and shown for what it might mean for postmodern structures of theology, especially as it relates, like language, to social bodies. Taken to the extreme, Jesus’ antithesis cannot end with an acceptance of alienation from one another and, therefore we accept this as a means by which humanity is liberated to be itself. No, it must go further than that: the acceptance of alienation must liberate humanity from our own humanity! It is something of a negation of a negation. It is to the credit of some postmodern theology that the pluralistic dimension has been added in contrast to the foundational approaches of modern conservative/liberal theology. But it is its discredit that it failed to relate the concept to the social and political conditions of the so-called ‘other’. Jesus challenges many theological ideologies with force when interpreted as a call to becoming alienation. Here, loving an enemy is not just an option – it is the only option; allowing privileged persons to determine structures of dialogue in a social debate is not only unacceptable, it is blasphemy; searching for an external and abstract purpose to life is wasteful of the banality of one’s own life that, in turn, appears as external and abstract to another. When we accept our own alienation as a form of life, we reveal the alienation of those around us. When politics are arranged for the benefit of some, an incomplete problem is being addressed. The point is not to discount material restructuring, but to not forget those counted among the poor in this scenario: the rich, the abusive, and the warmonger – for they will not see God. Outside Christ, even Christians cannot become peacemakers.

Then what is being honored when language is given a privileged position among human ability  – even if spoken in the name of an assumed holy God? I see it as an attempt to honor oneself beyond any concept of alienation between others. This is the root that Jesus is disrupting in the “antithesis” portion of the Sermon on the Mount: alienation is the source of human connectivity.  There is no marriage unless there is divorce; there is no righteousness unless there is vulgarity. In a way, the negative reveals the positive: language is a coping mechanism for the homo Sapien, and through it the homo Sapien never ceases to become human.  The language of “Yes/No” can only mean “Yes/No” if one’s entire life is regarded as an oath before others. We must refuse a life that designates only particular instances to take alienation seriously. Could Jesus be suggesting that to follow him in radically embracing alienation, even in language, is to involve oneself in becoming a fully realized human?

Scott J. Cowan currently lives in Los Angeles and is pursuing a Masters of Theology at Fuller Theological Seminary. His interests in cultural criticism, philosophy, and investigating social structures in language have an influence on his approach towards theology. Other than theological studies, Scott has a background in photography and art history/theory. 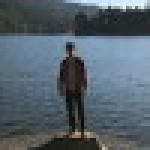