The Libyan situation poses very different questions as whatever regime Gaddafi was leading has clearly been removed by the revolutionaries, and hence the question of what will replace it is currently vexing minds in Libya and beyond. 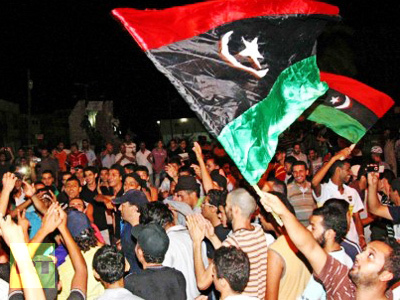 The fall of much of Tripoli on Sunday was greeted with joy by many, especially the crowds of thousands who were gathered in Liberation Square in Benghazi. The chants in unison were the calls “There is no God except Allah” and “We hear and Obey O Allah”. The revolutionary commander in Tripoli linked the event to the victory of the Prophet Mohammad over his tribe that had rejected his message and fought against him more than 14 centuries earlier which is known literally as the opening or conquest of Mecca. The parallels mentioned were numerous, from the timing (both the opening of Mecca and that of Tripoli occurred during the last ten nights of the holy month of Ramadan, just one day separating the two), the nature of the vanquished (the Prophet Mohammad and his companions faced oppression, torture, and death at the hands of those they came to conquer, and the abuses of the Gaddafi regime are open knowledge in Libya where thousands of mostly Islamic opposition have been tortured and killed while in captivity over the years), and the morality of the victors (in line with the Prophet’s general amnesty, the Libyan rebel official position is that those of the former regime who do not resist will not be killed).

Though there are many parallels that can be made, and the removal of the Gaddafi regime will certainly be an achievement that will be celebrated by many across the World and particularly Muslims, there are also significant differences with the comparison. Contrary to the conquest of Mecca, the fight over Tripoli has not been smoothly concluded with pockets of resistance likely to continue from the die-hard remnants of the regime who feel they have no choice but to fight. However, with the fall of the symbolic Bab al-Azizziya compound the issue appears to be a clearing up operation which may be concluded relatively quickly rather than the continuing of a civil conflict between the sides.

Over the longer term the more important difference is the fact that the victory of the Prophet Muhammad signalled the dominance of Islam over the Arabian Peninsula as a political force, which would subsequently spread over the neighbouring regions bringing down the other empires of the time. This victory in Libya is coming at a time of change across the Middle East, and the unravelling of the status quo threatening Western interests which were firmly entrenched in the stability of the former despotic regimes, with Islamic opposition often posited as the greatest threat to said interests. The Arab Spring which was born in Tunisia and Egypt has seen a change in some of personnel in both countries, but the underlying regimes remain firmly in place, and there is no threat as yet to the post-Sykes-Picot imperial arrangement of the region. Though the uprisings were successful in removing the symbols of power and their immediate associates, a true revolution sees the regime itself losing power and not merely its most visible actors.

However the Libyan situation poses very different questions as whatever regime Gaddafi was leading has clearly been removed by the revolutionaries, and hence the question of what will replace it is currently vexing minds in Libya and beyond. The National Transition Council – formed in Benghazi at the start of the uprising – has former regime members and exiles as its most visible members. People like Guma al-Gamaty, living as an exile from Libya for the last 30 years, are the voices for the NTC in London. Mahmoud Jibril is the chair of the NTC’s executive board, a man with a PhD from the United States who up until early this year was a part of the Gaddafi regime as head of the National Economic and Development Board promoting liberalisation and privatisation policies. The chairman of the council Mustafa Abdul Jalil was formally the Justice Minister of the Libyan regime until the start of the revolution, although he had a reputation for fairness and independence which he retains until now.

With such people in the leading positions on the NTC, it is perhaps unsurprising that a major worry for its backers is that it is not representative of the revolutionary movement and will struggle to gain internal legitimacy. Most of their public talk up until the assault on Tripoli had been to impress potential Western patrons, with early discussions held about establishing a free-market economy and a secular vision for the country. However, while talk of honouring oil deals and opening up the economy for foreign investment may chime well in Paris and Oslo, it is unlikely to particularly impress the disparate factions which have been giving their lives on the ground to defeat the regime’s forces, and who’s displeasure with the regime begun well before the current uprisings.

These different perspectives may have been the catalyst behind the as yet unsolved killing of Abdul Fattah Younus while he was being held for questioning regarding military matters. At the time he was the head of the revolutionary army, but had previously been a close confidant of Moammar Gaddafi and the head of his army and, with a reputation for cracking down harshly on dissidents. As a sign of the likely forthcoming power struggle in post-Gaddafi Libya between the NTC and other elements of the revolution, during a telephone interview during the assault on Tripoli on Sunday Abdul Jalil launched an astonishing attack on what he called “Islamic extremists” who he accused of assassinating Younus. Whatever the truth behind the accusations, it appears to fit a calculated narrative for the future to ensure the pre-eminence of Western educated “liberal” Libyans, either from within the former regime or imported from abroad, while again sidelining opposition more representative of the socially conservative and religious observant majority of the country that is apparent to anyone who either visits the country or at a minimum observes the Arabic satellite discussions with the rest of Libya (excluding the handful of NTC members who patronise the studios in Qatar, London and Paris).

Which leads to the final point of difference with the conquest of Mecca. The Prophet Mohammad led the conquest at the head of his own army, as an autonomous actor leading events independently. In this case, the Libyan revolutionaries had to rely upon NATO to come to its aid to defend its early gains, and indeed to help it ease its advance into Tripoli due to their relative military weakness as compared to Gaddafi’s forces. This means that NATO has been, and continues to be, a major factor in deciding the direction of the fate of Libya. It is also the reason why there is currently discussion about NATO’s future role in the area, with some commentators even suggesting the necessity to send ground troops to ensure the peace. The NTC will be doing the rounds in Europe on Wednesday, garnering and strengthening the same international legitimacy that the Gaddafi regime previously enjoyed. The question left is will it take the Libyan people with it, and if so, under what banner. The future lies between a more benign Libya following the technocratic future which was previously envisioned by Saif al-Islam based upon neo-liberal laissez-faire economic principles which have largely been a failure elsewhere but suit Western commercial and political interests, or an independent and more overtly Islamic government reflecting the population’s sentiments.

While America and other Western nations played a guiding role behind the scenes during the uprisings in Tunisia and Egypt, successfully managing the situation to largely maintain the status quo and their interests with the regime left in place, in Libya they are using political influence that comes with the military backing provided by NATO to try to manage the direction of the future of the country through their financial and political backing of the NTC. But with a Syrian revolution not so far away growing in spirit, and still resistant to the barbaric Assad regime which despite the political space and opportunity afforded to it has been unable to extinguish an opposition who steadfastly opposes foreign intervention despite the massive loss of life, the tools left in the neo-imperial toolbox appear to be running out.

Reza Pankhurst has a PhD from the London School of Economics and Political Science, Government department. He is a former political prisoner of the previous Mubarak regime in Egypt, having spent 4 years in jail between 2002 and 2006. He also contributes to the New Civilisation online magazine (www.newcivilisation.com)