These systems of oppression, much like the golden calf, do not represent the God of love and righteousness. Instead, the fashioning of what can be tamed points to our depraved greed, moral bankruptcy, and the diabolical strategies we employ for survival.

When the people saw that Moses delayed to come down from the mountain, the people gathered around Aaron, and said to him, “Come, make gods for us, who shall go before us; as for this Moses, the man who brought us up out of the land of Egypt, we do not know what has become of him.” 2 Aaron said to them, “Take off the gold rings that are on the ears of your wives, your sons, and your daughters, and bring them to me.” 3 So all the people took off the gold rings from their ears, and brought them to Aaron. 4 He took the gold from them, formed it in a mold, and cast an image of a calf; and they said, “These are your gods, O Israel, who brought you up out of the land of Egypt!” 5 When Aaron saw this, he built an altar before it; and Aaron made proclamation and said, “Tomorrow shall be a festival to the Lord.” 6 They rose early the next day, and offered burnt offerings and brought sacrifices of well-being; and the people sat down to eat and drink, and rose up to revel.

7 The Lord said to Moses, “Go down at once! Your people, whom you brought up out of the land of Egypt, have acted perversely; 8 they have been quick to turn aside from the way that I commanded them; they have cast for themselves an image of a calf, and have worshiped it and sacrificed to it, and said, ‘These are your gods, O Israel, who brought you up out of the land of Egypt!’” 9 The Lord said to Moses, “I have seen this people, how stiff-necked they are. 10 Now let me alone, so that my wrath may burn hot against them and I may consume them; and of you I will make a great nation.”

11 But Moses implored the Lord his God, and said, “O Lord, why does your wrath burn hot against your people, whom you brought out of the land of Egypt with great power and with a mighty hand? 12 Why should the Egyptians say, ‘It was with evil intent that he brought them out to kill them in the mountains, and to consume them from the face of the earth’? Turn from your fierce wrath; change your mind and do not bring disaster on your people. 13 Remember Abraham, Isaac, and Israel, your servants, how you swore to them by your own self, saying to them, ‘I will multiply your descendants like the stars of heaven, and all this land that I have promised I will give to your descendants, and they shall inherit it forever.’” 14 And the Lord changed his mind about the disaster that he planned to bring on his people.

Exodus 32: 1-14 tells us about the idolatrous relationship between the golden calf and people of Israel. The people end up creating an image representing Yahweh even after the making of “gods of gold and silver” was explicitly prohibited (Exodus 20:22-23). Over the years biblical scholars have argued that the image of the golden calf was not Yahweh’s replacement but rather a manifestation of Yahweh: a visual representation of the unseen divine. This can be confirmed from Aaron’s proclamation, “Tomorrow shall be a festival to the LORD” (verse 5). The molding of gold into an image of a calf is therefore not an act of substitution; instead it is one of representation.

In his reflection on the text, Miguel A. De La Torre notes that this landless and resourceless people in the wilderness preferred a god that could be seen and touched, one they could mold into an image familiar to them (Preaching God’s Transforming Justice, p. 431). Having lost patience and their sense of direction, grown weary of their dependence on their leader Moses and Yahweh, and overcome with anxiety and insecurity, the people decided to make gods for themselves that they believed would lead them into the promised land. The Lord’s covenant had been replaced by “this golden calf anti-covenant” (David Carr, An Introduction to the Old Testament, p. 193).

What is striking in this text is the way the image of the golden calf was divinized by people with the help of Aaron, the master sculptor. In verse 4, we read that the people proclaimed, “These are your gods, O Israel, who brought you up out of the land of Egypt!” Through this statement of divinization, the symbol of the golden calf became a unifying force providing people with a new sense of security (verse 6). By fashioning gods from their own (or lack of) resources, they celebrated this new found sense of security in the elevated gods of gold by offering burnt offerings and sacrifices of well-being, eating, drinking, and reveling (verses 4-6). Being able to see and touch Yahweh’s new shimmering and immovable earthly representative gave them power to exercise a certain control over themselves and over theirgods. In this manner, the people not only affirmed their authority over their new gods of gold but even over the one they thought it represented.

Today, with the world battling the coronavirus and U.S. leading in the number of Covid cases, with unemployment rate on the rise and racial tension increasing, there is one product that has seen a massive growth in sales: guns. Gun sales surging to new heights during a global pandemic is not only contrary to all reason but preposterous and immoral. Writing on idolatry and the American gun cult, constructive theologian John J. Thatamanil notes, “We moderns may not any time soon melt down our gold to build a golden calf, but most forms of idolatry are subtler—so subtle that we are captured by them before we realize it” (“The Price of Freedom? Child Sacrifice and the American Gun Cult”). If in Tillichian thought, as Thatamanil further notes, idolatry is a matter of ultimacy, one cannot but notice how the gun has become the object of people’s ultimate concern, in the same manner the image of the golden calf had been to the people of Israel. The gods of lead much like the gods of gold have been accorded divine status. Perhaps, it is safe to say that there is no god more visible in this country than the gun.

Consider the recent statement made by America’s Commander-in-Chief in reference to his 2020 presidential running mate: “He’s against God. He’s against guns.” At least two problems arise from this statement. First, in positing God and guns in the same breath, the President granted divine certification and invoked God’s blessings on a weapon that violates human dignity and continues to create the capacity for violence, particularly against racial minorities. Second, it exposed the apprehension of many American people—much like that of the Israelites in the wilderness, where an intangible God cannot be trusted to keep oneself secure as the unseen power is incapable of being tamed by human hands.

The refusal to trust an intangible God augments people’s desire to fashion for themselves a god that could be seen and held as it accords them the power to control their life, and importantly for them the lives of others too. Therefore, standing in contrast to this unseen, intangible God are guns that seemingly grant one far more security and power by virtue of being seen, touched, held, controlled, and operated against perceived enemies in the name of self-defense, in the name of God. Just like the golden calf, the gun or as J. Leavitt calls it “an image caste in lead,” becomes the god we have built altars to sacrifice bodies that we are repelled by.

The golden calves of today are not just guns; any in/visible structure that grants a false sense of security by feigning to be a representative of the divine become calves of gold. Isabel Wilkerson in her riveting book Caste: The Origins of Our Discontents describes caste as the invisible structure. True as this initial description is, it would help to note how our patterns of social interactions grant visibility to invisible structures. Invisible structures of oppression become visible calves of gold when they are divinized and immortalized. We must therefore ask ourselves: To what in/visible structures are we building altars to as individuals, as faith communities, as nations? What privileges are we hoping to secure or what bodies are we harboring to control by bowing down to the violent and vicious golden calves of hetero-patriarchy, casteism, racism, capitalism, colonialism, and xenophobia?

These systems of oppression, much like the golden calf, do not represent the God of love and righteousness. Instead, the fashioning of what can be tamed points to our depraved greed, moral bankruptcy, and the diabolical strategies we employ for survival. Our moral blind spots prevent us from seeing our own complicity to structures that perpetuate hatred, irreverence, and prejudice. We suspend our moral (and religious) principles to join forces with the majority and satiate our lust for power and provisional security in the pursuit to safeguard our privilege, pride, and honor. Worse, we revel with impious piety before the gods we mold in the hope that they shall “go before us” into the promised land at the expense of others.

Not attending to these so-called symbolic representatives of the divine is to allow culture to reinforce them by passing them down through generations. What then must our response be? It would be wise to pay attention to the Lord’s anger (verse 10). Today, one can imagine God looking around filled with rage at the sight of golden calves being worshipped. The gods of gold—false representations of the divine—are in need of annihilation. This was the fate of the golden calf at the hands of Moses, the prophet of God. As prophets of justice what gods are we prepared to demolish today? 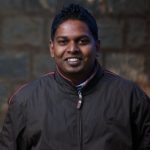 Arvind Theodore is a Ph.D. student at Union Theological Seminary, NY in Social Ethics. He is the author of Church and Human Sexuality.