Then Jesus told them a parable about their need to pray always and not to lose heart. 2 He said, “In a certain city there was a judge who neither feared God nor had respect for people. 3 In that city there was a widow who kept coming to him and saying, ‘Grant me justice against my opponent.’ 4 For a while he refused; but later he said to himself, ‘Though I have no fear of God and no respect for anyone, 5 yet because this widow keeps bothering me, I will grant her justice, so that she may not wear me out by continually coming.’” 6 And the Lord said, “Listen to what the unjust judge says. 7 And will not God grant justice to his chosen ones who cry to him day and night? Will he delay long in helping them? 8 I tell you, he will quickly grant justice to them. And yet, when the Son of Man comes, will he find faith on earth?”

Often described as the “Parable of the Persistent Widow,” Luke 18:1-8 is one of the texts unique to the Gospel of Luke. Luke even prefaces the parable with a ready interpretation, suggesting it is about the “need to pray always and not to lose heart” (v. 1). Despite Luke’s explanation, Jesus’ parables rarely have a single or simple meaning. Instead, as Amy-Jill Levine explains, parables “invite us into engagement with them.”[1]

Reading the parable in light of the #BlackLivesMatter movement, a political intervention organized in response to anti-Black racism, we can see in this parable the complexity of “justice” as it appears both in human and divine purview.[2]

Jesus begins the parable with a description of a “certain judge” who lacks the characteristics one would want in a judge, as he neither fears God nor respects people. The judge even embraces these characteristics, admitting, “I have no fear of God and no respect for anyone” (v.4). Needless to say, this is not the type of judge before which one would wish to bring a case.

The primary characteristic of a good judge according to the Old Testament is that the judge fears God (2 Chronicles 19:9), a characteristic that ensures judges rule justly. However, this is not a judge inclined toward justice, as justice demands respect for the other, something that the judge blatantly eschews. For many involved with #BlackLivesMatter this judge might sound familiar, as one judge after another fails to hold accountable those who have shot and killed unarmed African-American men.

Although the judge is unjust, a widow is in the position of bringing a case before him. In biblical tradition, widows are often depicted as deserving of care, protection, and justice. Deuteronomy 27:19, for example, reads, “Cursed be anyone who deprives the alien, the orphan, and the widow of justice”.

Many interpreters of the parable read the widow as elderly and poor, since other widows mentioned in the Gospel fit these characteristics. In the opening chapters of Luke, for example, the widow Anna is eighty-four and living in the Temple (Luke 2:37). The parable, however, does not demand interpreting the widow this way and we would be wise to remember that widows can be a variety of ages, classes, and backgrounds. For instance, Lavisha Reynolds was only 32 when she witnessed the shooting death of her partner Philando Castile.

While we are not given any specifics about the widow’s case, we do learn that she has had, unsurprisingly, little luck with this judge and has repeatedly brought her case to him. The NRSV reads, “[she] kept coming to him and saying, ‘Grant me justice against my opponent’” (v. 3). Eventually, the judge grants the widow her case. This is due in part because of her persistence, her continual willingness to “bother” the judge with her plea (v. 5).

In this way, the parable resembles the #BlackLivesMatter movement, including the widows and mothers involved in the movement, which persistently seeks justice through the courts, along with protests and social media efforts in which the names of the dead are repeated. #TrayvonMartin #TamirRice #EricGarner #PhilandoCastile #KeithScott

The judge in the parable told by Jesus does not rule in favor of the widow only on account of her persistence. Although the English translation of the NRSV translates the Greek verb hypopiazein in v. 5 as “wear [him] out,” the Greek suggests that the judge is concerned the widow will come and give him a black eye.

Perhaps the judge is fearful that his well-being and his status quo might be disrupted. Perhaps he is concerned about his reputation being ruined. Perhaps he is concerned about the possibility of violence. While the widow never actually gives the judge a black eye, the fact of the matter is, when faced with repeated instances of injustice, people often turn to direct action that those in power interpret as violent. As Rev. William J. Barber II explains, in light of protests in Charlotte, NC this summer, these actions, including riots, “are the predictable response of human beings who are drowning in systemic injustice.”

The parable ends with Jesus employing a “qal wahomer” argument, a traditional rabbinic form of argumentation, asking: “And will not God grant justice to his chosen ones who cry to him day and night? Will he delay long in helping them?” (v. 7). The response to these questions comes immediately in the next verse, “I tell you, he will quickly grant justice to them” (v.8).

Despite Jesus’ assurance that God will respond to those who persist in seeking justice even more than the unjust judge, one must admit that the #BlackLivesMatter movement has yet to see God’s justice enacted. The social dynamics that undergird these instances of violence, including racial bias and systemic racism, persist and we can, sadly, imagine that there will be more deaths in the future.

Parents of African-American children fear for the safety of their offspring, while children are anxious about the real possibility of losing parents. The widows and orphans cry out for justice. As Rakeyia Scott pled while watching her husband Keith L. Scott being shot by police, “Don’t shoot him, don’t shoot him.”

Luke’s text concludes with Jesus wondering, “Yet, when the Son of Man comes, will he find faith on earth?” (v. 8). The question is poignant when looking at the text in relation to the #BlackLivesMatter movement, for one can imagine that it is difficult to have faith in a world where justice is lacking and change is slow. Despite this, the movement serves as an example of faith; for it is a movement guided by a belief in “resilience in the face of deadly oppression.” This is a faith in the power of persistence. So, yes, this is one place where the Son of Man will find faith upon his return.

[1] Amy-Jill Levine, Short Stories by Jesus: The Enigmatic Parables of a Controversial Rabbi, Kindle edition (HarperOne, 2014), 1.
[2] #BlackLivesMatter is a movement organized by Alicia Garza, Opal Tometi, and Patrisse Cullors. For more information about the movement, its herstory and aims, see http://blacklivesmatter.com/. It is important to note I am writing this piece as a white ally of #BlackLivesMatters. I am aware that I move with privilege in this world, but my hope is that I approach this movement with humility and the hope that I can contribute in some small way to the dismantling of racism.

Lynn R. Huber is Professor of Religious Studies at Elon University in Elon, NC. Her most recent book Thinking and Seeing with Women in Revelation (Bloomsbury, 2015) explores the feminine images of the Book of Revelation and how they are interpreted by later visionary women. 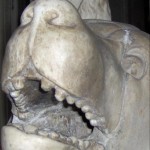