The United States is comprised of a religiously diverse citizenry, which leaves officials to balance the tension upheld by a constitution that simultaneously prevents the establishment of a national creed and yet preserves one’s right to freedom of religion. In practice, officials in the United States cannot legislate theology, but they can, and do, use theology to legislate.

The United States is comprised of a religiously diverse citizenry, which leaves officials to balance the tension upheld by a constitution that simultaneously prevents the establishment of a national creed and yet preserves one’s right to freedom of religion. In practice, officials in the United States cannot legislate theology, but they can, and do, use theology to legislate.

As a result, the United States is not a secular democracy where laws guarantee freedom from religion and dismiss theological rhetoric in the political process; neither is it a theocracy, where a single religion prescribes all laws. Whether we like it or not the United States is a theolegal democracy, defined as a nation that simultaneously guarantees citizens the right to free expression of belief while preventing the establishment of a state religion. 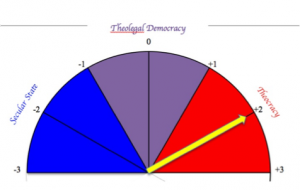 These guarantees allow officials to use theology as one of many resources in making, applying, or administering law. A theolegal democracy does not prevent citizens or officials from using their religious worldview in the public arena as seen in secular nations. Nor does a theolegal democracy permit officials to use their theology to deny civil rights to those who do not meet those creedal tests as seen in theocracies.

Pundits often classify these officials as theocrats but a theocrat is one who governs in the context of a theocracy, where God’s rule is executed by divinely guided leaders. It is more accurate to define them as theolegal officials. They govern within the tension found in a theolegal constitution that prevents them from establishing an official or a de facto state religion, yet affirms their right to freely express their beliefs. Some officials may try to adopt theocratic practices. However, the very nature of a theolegal democracy requires officials to exercise restraint by not allowing their particular religious worldview, or the religion of their constituents, to become the rule of the land. Many will try. They may win one day but loose the next. They soon learn that their efforts must be balanced by the fact that a theolegal democracy is also comprised of a plurality of religious and non-religious citizens who use the democratic process to remove aspiring theocrats from power. Alternate theological rationale expressed by various interest groups will be used to counter the theolegal behavior of those in temporary power. Those who want to stay in power the longest must learn to see religion as but one of many reasons why to pursue a particular agenda. The fascinating thing about this kind of government is that it is the diversity within an engaged citizenry that prevents the theolegal democracy from becoming a theocracy.

So, how do you know a theolegal official when you see one? Take, for instance, the recent nationwide effort to replace Catholic members of Congress with “real Catholics.” U.S. Senator Sam Brownback of Kansas served as the spokesman of the Catholic Advocates who sought to remove “so-called Catholics” from public office (specifically, Edward Kennedy, Nancy Pelosi, and John Kerry). In this example, a self-appointed group of Catholic voters wanted to elect officials to represent their particular form of Catholicism, which differed from the religious views of others within that particular religious tradition. This type of behavior is legal in a theolegal democracy; however, it may be so offensive to a broad group of citizens that theolegal officials like Sam Brownback will not be in power very long

Governor Robert Bentley is learning this the hard way. During his 2011 inauguration as governor of Alabama, he proclaimed to the members of the Dexter Avenue King Memorial Baptist Church in Montgomery, “So anybody here today who has not accepted Jesus Christ as their savior, I’m telling you, you’re not my brother and you’re not my sister, and I want to be your brother.” After considerable criticism he issued a public apology.

Then there is Louisiana-born Governor Bobby Jindal who self-identifies as Catholic. Voters asked, how can a man whose Hindu parents emigrated from India really be Christian? Those who doubted may have found refuge in Jindal’s professed faith in Jesus Christ, a belief statement more compatible with many Evangelicals than the views of mainline Catholics: “…our God wins…so let’s recommit ourselves to go plant those seeds of the gospel so that others might come to have that gift of eternal life. It may be the most important thing we do.” 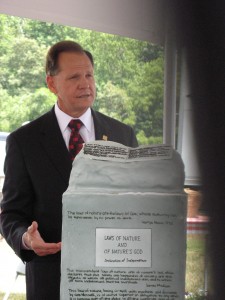 These theolegal statements made by Jindal and Bentley mirror that of Justice Roy Moore, who in 2003 protested the removal of the Ten Commandments from the Alabama state judicial building by denouncing: “We should be offended when elected representatives of this state, the governor, the attorney general, and the justices of this court fail to acknowledge God as the basis of our justice system.”

Theolegal legislators are just as easy to spot. Take, for instance, the behavior of John Wright of the Oklahoma House of Representatives who was deeply offended when Pastor Scott Jones, an openly gay United Church of Christ minister, acknowledged his male partner in a prayer from the legislative floor. This led Wright to move to strike the prayer from the record, a motion not affirmed by the majority of his colleagues. The very act of questioning the identity of a minister implies that legislators have the power to determine who is worthy of the free exercise of religion. Although Wright’s religious beliefs were not used as public rationale, legislators need not explicitly exercise their beliefs to engage in theolegal practices. The very act of denying citizens the right to free expression of religion based on their identity is an example of theolegal behavior. For Representative Wright and those who voted against the prayer, the intention was to legally establish the God of the heterosexual as the only permissible expression of faith. Not all legislators followed suit, demonstrating that not all officials, many of them unabashedly religious, affirm Wright’s theolegal practices. An official need not be a theolegal official just because they are religious.

The case of Kitzmiller v. Dover Area School District provides a powerful example of how local political officials used theology to determine policy. However, the judge found the attempt to teach creationism in Pennsylvania public schools to be religiously motivated. Judge Jones, appointed by President George W. Bush, was a known Lutheran and Republican whose integrated identity did not influence his decision. Similar to legislators in Oklahoma who did not vote with Representative Wright, Judge Jones chose not to act as a theolegal official. Judge Jones prevented this theolegal practice by deeming the actions of the school board to be religiously motivated, based on evidence that intelligent design was inherently theological, not scientific.

Many celebrated the triumph of a diverse democracy forming heterogeneous coalitions to ensure that those in power do not use the state to legislate their theology: more often than not these coalitions are comprised of religious individuals. This counters the claim made by secularists that religion is democracy’s foe.

Unfortunately, this point is often left unspoken when media provides a bullhorn for extremists, as demonstrated by the theolegal threat by evangelist Pat Robertson who responded, “I’d like to say to the good citizens of Dover, if there is a disaster in your area, don’t turn to God, because you just rejected Him from your city.”

The remedy to these such hollow threats is found in diversity because human history has taught us that diversity is a threat to both a theocracy and a purely secular government, neither of which accurately describes the complex political system of the United States. Our nation is comprised of unlikely collaborators whose wisdom is likely to thrive for centuries to come: those who counsel us to heed the guidance of separation of religion and the state; those who counsel us about the wisdom of freedom of belief; and those who counsel us to self-govern with the belief that—e pluribus unum—out of many we are one.

Each of these groups play an important self-regulating part in our theolegal democracy, a nation that simultaneously guarantees citizens the right of free expression while prohibiting the establishment of a state religion. These constitutional guarantees allow officials to use theology as one of many sources of knowledge in making, applying, and administering law; however, they are not allowed to use their theology to deny civil rights to those who do not meet creedal tests. These theolegal practices may displease some and satisfy others, but many appreciate the contradictory yet necessary qualities of our theolegal democracy.

If we agree that the theology of one should not be used to rule all, as seen in theocracies, and that freedom of belief is a fundamental human right denied in secular nations, then we might agree that the United States is, whether we like it or not, a theolegal democracy.

Sections of this article were reprinted with permission from Whose God Rules?