Almost ten years ago, I had an irregular Pap smear. The doctor found unusual growths on my cervix that then had to be biopsied. During the colposcopy, the doctor was very emotional. She kept mentioning how I had “done everything right” and did not “deserve” this. She was reacting to the fact that I was, at the time, unmarried and still a virgin. Her emotions made me uncomfortable at the time (and more nervous about the medical procedure). Now, years later, I feel very frustrated at the memory of her behavior.

It’s not that she was merely unprofessional, but the idea that there might have been some circumstance where I, at 22, deserved the abnormal cells is appalling. Had I been sexually active at the time or previously, would I have deserved the unusual growths? If I had been raped or molested, would cervical cancer have been my just reward for not telling or not fighting back or simply being irresistible? If I had had an abortion, would a panicked and painful procedure, followed by three more Pap smears in a year been the very least of what I deserved?

We live in a culture that has gotten very hung up on deserve– a concept with nebulous parameters. Does anyone ever truly get what he or she deserves? We may occasionally be rewarded for this or that good behavior, but on the whole most of our lives balance out into unexpected graces and occasional unfortunate circumstances. Sometimes we have large clusters of one or the other, but very rare (or non-existent) is the person who deserves a horrid fate.

It is so easy to forget the role that each of us plays in what happens to our neighbor. In Luke 16:19-31, Jesus tells the story of the rich man and the beggar outside his gate. The beggar is named Lazarus and the story is set up so that its original hearers would have presumed Lazarus certainly was a sinful man. Surely he deserved the sores on his body, the suffering he experienced. If he did not deserve it, why would God have made it happen?

Simultaneously, the rich man surely deserved all that he had (and, likely, more). After all, if he did not deserve it, if he was unrighteous, why would God have granted him so much obvious wealth and the subsequent power that comes with money?

Of course, in the parable the man who seems righteous (judged by what he has) dies and goes to a place of torment. The man who seems obviously unrighteous (judged by what he does not have) goes to the bosom of Abraham. Even now, when we hear this parable, we may not immediately come to the conclusion that Lazarus deserves his ailments. After all, we are modern, scientific people who understand germ theory. It is harder for us, however, to be objective about the rich man. Surely he does deserve what he has. He earned it, didn’t he?

Floating around in the general political consciousness is the same idea that spawned this parable from Luke’s Gospel of Christ. The idea that people deserve the struggles (the unintended pregnancies, the poverty, the homelessness, the lack of healthcare, the imprisonment) that come their way still crops up as laws are suggested and passed, as behaviors are ignored in one group and punished in another, as the chasm between those who have and those who have not widens. The significant differences between populations, between cities, between people in this county are not inevitable. Eliminating the idea of who is deserving could breach much of the inequity in this country.

Did I deserve precancerous growths? I did not, but I wasn’t undeserving either. They just happened- a result of the free will that exists in all creation, not just people. The time has come to stop the rhetoric around “deserve” and, instead, begin to bridge the chasm that idea has created. Those in power (and those who helped them get there) must come to know equality in the eyes of the law and the resources of the land is not earned. It is not deserved. It comes through citizenship. Outside of citizenship, it comes through graciousness.

Perhaps the Church needs to lead the way in this conversation. The time has come to acknowledge our own sin in uncertainty in extending grace. We love to preach it, but we need make our sermons lived and not heard. In acknowledging how often we want to draw lines around just who deserves help, prayer, no gossip, communion, baptism, invitation, we may begin to close the chasm that exists in our society. After all, if we put all those undeserving of some grace on one side of the chasm- who would be left to offer the water to cool our tongues? 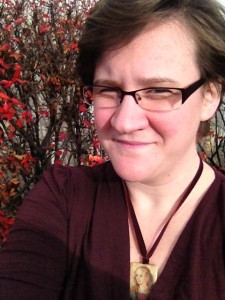 Julia Seymour is an ordained pastor in the Evangelical Lutheran Church in America, currently serving a small congregation in Anchorage, Alaska. She lives with her husband of six years, their toddler son, their newborn daughter and their middle-aged Labrador retriever.