Origins have long been at the foundation of our explanations. The Greeks used origin myths to explain why the gods tormented and tested humanity. The fall from grace in the Garden of Eden was the wellspring of New Eastern and Western ethics and philosophy for thousands of years. And the hero’s origin story is still a mainstay of modern popular culture.

Our cultural fascination with origins is also largely responsible for the push to map the genetics and genomics of human evolutionary history. Even cast in a scientific light, the question of human origins continues to play an outsized role in how we understand ourselves, frame moral questions, and identify what communities we belong to.

Corporations such as 23andme and Ancestry.com offer potential customers the story of themselves; one that is both entirely unique and yet also connected to their origins. A TV spot from 2015 described 23andme as a “story about you.” On their website, the ancestry timeline tell us we can “travel back in time to gain a clearer picture of where you came from, where your ancestors lived and when they lived there.”  By sending in a sample of your genetic material to this company, you can learn about your famous relatives or discern what percentage of your genes originated with the Neanderthals.

And now these evolutionary tools are being applied in a new context– the urgent question of viral origin and spread in light of the Covid-19 global pandemic. Connected through digital space, researchers have taken on the task of tracing origins of this coronavirus– a task that promises to explain how it moved from the animal into the human world, how it has and continues to spread, and possibly to tell us how to free our societies from it.

A team lead by Kristian Anderson of the Scripps Research Institute recently published a study in Nature, asserting that the novel corona virus (HCoV-19) is not “a laboratory construct or a purposefully manipulated virus.” Their argument depends on reasoning backward from the present state of the virus through its imagined past– to its ultimate origin. Because the virus contains components that differ from any previously studied viruses, the researchers concluded that this virus could not be human-made.

This is an argument about genealogy. These scientists determined that the genealogy of this virus was evolutionary, rather than human-designed. Similar logic has often been used in evolutionary criticisms of creation-science and Intelligent Design. As Stephen Jay Gould argued in the 1980s, anatomic structures such as the panda’s thumb should not be convincing proof that living things were evolved, not designed. The panda’s thumb, although used like an opposable digit is an enlarged radial sesamoid bone. Gould argued that the thumb was actually poorly designed from an engineering standpoint, and not something you would expect if it had been constructed from scratch by a divine being. Andersen and his colleagues use similar reasoning, though they don’t frame it in science and religion terms. As another scientist put it to Science News, “This is not a virus somebody would have conceived of and cobbled together. It has too many distinct features, some of which are counterintuitive… You wouldn’t do this if you were trying to make a more deadly virus.”

A second study of Covid-19 aimed at understanding the spread of the virus, came out of the University of Cambridge and was published in Science in early April. By sequencing 160 viral genomes, collected from human patients, researchers were able to model plausible trees of the spread of coronavirus. Critically, this method has its origins in studies of human populations, according to the team of researchers,  “These techniques are mostly known for mapping the movements of prehistoric human populations through DNA. We think this is the first time they have been used to trace the infection routes of a coronavirus like COVID-19.”

The promise of this exercise is in the title  of the study “Genetic network analysis provides ‘snapshot’ of pandemic origins.” And if we can understand the origin of the pandemic, perhaps it could be possible to know how the infection originated, to protect ourselves from it coming about again. Both of these studies are aimed at understanding the origin of the pandemic. Both have promise answers that might prove essential in answering key questions about the global pandemic: Did we do this to ourselves? Was it malicious, or merely accidental? Could it happen again, and where?

It is no accident that the team of scientists from Cambridge used tools to understand the virus that were developed to map human ancestral populations. Although evolutionary histories have been developed for many organisms– from archaebacteria, to mice, and plants– human origins have always taken pride of place in our collective psyche. And if the scientific work of phylogenomics teaches us that evolutionary history is more complex, and less clear than we might have imagined, this has not had an effect on the commercialization of human racial ancestry.

Many critics have written about the data and privacy concerns that abound in the work of personal genealogy companies. Others have been concerned with the cultural meanings produced by these genetic tests, particularly the racial conclusions they promote. Some of the work has been restorative; 23andme researchers for instance, have used the genetic material amassed form their customers to track the genetics of the Atlantic slave trade. For individuals whose ancestors were forcibly removed from Africa and brought to the New World where they were stripped of their names, language, and culture, these genetic tests are one way of connecting to a family past. But not all the results of genomic testing can be considered benign.   Many Hawai’in activists and scholars have criticized the use of genomic data by state authorities in debates over sovereignty and land claims by Native Hawaiins. Similarly, Sisseton-Wahpeton Oyate scholar and activist Kim Tallbear has written forcefully on the deep problems with using genetics, rather than tribal and community sovereignty, to define and legalize Native American identity. And in the United States, where naturalized citizenship is under rhetorical and legal threat, it is not difficult to imagine the dystopian ends that the current, or a future like-minded, administration could put a database of genomic information to restrict citizenship rights.

We believe that if we can determine the origin of the virus, we can discern whether this pandemic was intentionally engineered, or an accident. If we can track the pathways of the virus, we can determine how the infection began, perhaps we can stop new infections from starting, or future novel viruses from emerging and spreading. These seem like unequivocally good efforts in this time that is filled with so much uncertainty and chaos.

But should we be wary of our unending desire for biological genealogy, when it proves so helpful and insightful in this crisis? Biological genealogies, or at least, the promise of them, have done so much violence in the past century, but in this case, can they work for good?

What we cannot do is stop thinking genealogically, or to entirely set aside our desire for historical origins. Just as the European medieval worldview hinged on the concept of divine generation, our modern world contemplates life and time reproductively. We cannot think ourselves outside of genealogical logics.

What we can do is hold these genealogies with a hermeneutic of suspicion and an ethic of community generosity. Even as we seek the origin of the virus, we can reject the xenophobia and race-baiting of western news coverage of Chinese dietary practices. News coverage that fuels assumptions that the presumptive geographic origin of the virus justifies violence against Asian Americans in the United States. And even as we are drawn to the “story of us” we can seek to welcome the stranger, the refugee, and the immigrant. Is our duty to those who we already imagine a shared genealogy? Or is our duty to create a genealogy of care and community as expansively and creatively as possible? 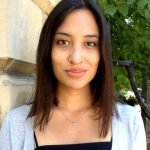 Myrna Perez Sheldon is assistant professor, jointly appointed in Classics & World religions and in Women’s, Gender & Sexuality studies at Ohio University. She has been a postdoctoral fellow in the Center for the Study of Women, Gender, and Sexuality at Rice University and received her doctorate in the History of Science from Harvard University. She researches how both evolutionary science and Christianity influence racial and sexual identities in the United States. She is currently the PI of a three-year grant project, “Critical Approaches to Science and Religion,” funded by the Templeton World Charity Foundation, which intends to reshape the study of science and religion by engaging the field with critical-race, feminist, queer, and postcolonial theory. 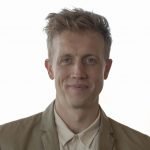 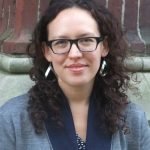 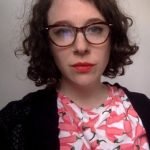 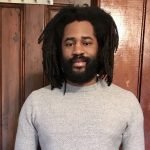