The journal is pleased to welcome its newest board member, William T Cavanaugh, Professor of Catholic Studies at DePaul University in Chicago, Illinois. Cavanaugh is a well-published theologian; his works includeTorture and Eucharist (1998), Theopolitical Imagination (2003), and Being Consumed: Economics and Christian Desire (2008). His most recent book, The Myth of Religious Violence: Secular Ideology and the Roots of Modern Conflict, appeared in 2009 with Oxford University Press.

Below is an excerpt from a recent interview about his latest book with Criag Martin of the Bulletin for the Study of Religion: 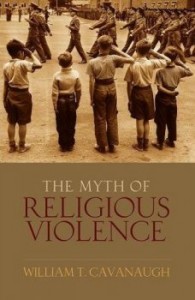 This work is notably not theological; rather, it is similar in spirit to the critical genealogies of “religion” penned by Talal Asad, Russell McCutcheon, and Tim Fitzgerald. In this book Cavanaugh dismantles the myth that “religion” is fundamentally violent; he does so via an immanent critique of the most popular arguments in support of this myth. However, he then goes on to show how this myth has been enlisted in support of, e.g., American militarism in the Middle East—for what better justification for war against “religious fanatics” is the idea that their “fanaticism” makes them fundamentally prone to irrational violence, in contrast to the righteous “just wars” of western democracies? As Cavanaugh puts it, “In the West, revulsion toward killing and dying in the name of one’s religion is one of principal means by which we become convinced that killing and dying in the name of the nation-state is laudable and proper” (4-5).

Craig Martin: I found the most poignant line in the book to be the quotation just above. Can you comment on this idea and the political stakes that motivated you to write this book?

William T. Cavanaugh: A speech given by a Department of State official four years into the occupation of Iraq condemned those “who try to achieve their goals through the use of violence.” His target was Sunni and Shi’ite partisans. Journalist Rami Khoury remarked on the speech: “as if the US had not used weapons when invading Iraq.” The myth of religious violence works so that secular violence just doesn’t seem to count as violence. As I illustrate in the book, one of the primary motivating myths behind the spread of secular social order—by military means if necessary—is the idea that only secular social orders successfully solve the problem of religious violence. So the US spends more on its military than all the other nations of the world combined, but we are much more interested in talking about someone else’s violence. Despite all the current talk about drastic budget cuts, the military budget is off limits, in part because our violence isn’t violence. It goes by other, more honorable, names, like peacemaking and patriotism.