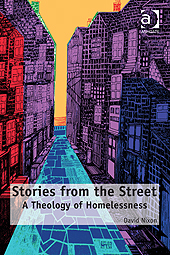 [David Nixon, University of Exeter, previews his recently published book, Stories from the Street: A Theology of Homelessness]

Stories from the Street: A Theology of Homelessness began life in a chance encounter I had at a direct access hostel. I was fairly newly ordained as a priest in the Church of England. I didn’t think I knew it all, but I did think I knew something. My conversation with ‘Simon’ ,who was recovering from drug use, turned the tables on my knowledge – I sat at his feet as he told me about his life, or rather I looked over into the abyss of his experience. This lasted all of ten or fifteen minutes, but it left a question hanging: what’s really going on here?

That led to further conversations with recordings and notes, with people who had been homeless, were vulnerably housed, or who were currently defined as homeless. Further reading, writing and reflection – the blood sweat tears of research – finally produced a PhD thesis, and quite a bit later a revision and updating which has just been published with Ashgate. I solved one problem early on, which almost by chance, led to a methodological shift. I had eleven interviews, an inelegant number, and needed a twelfth especially for an exemplar of Christian theology. The missing piece of course was supplied by the mostly silent and invisible interviewer / narrator / researcher, leading me into new areas of unreliability, reciprocity and affect. I related my own story in the hope that readers would be encouraged to do the same, and in an attempt to redress partially the ethical imbalances of qualitative writing.

The argument of the book replicates the experience of the hostel in suggesting that homeless people (and by extension all marginalised people) have not only a story to tell, but one which can teach us as individuals and us as the Church, even with the possibility of returning the Church to its true role and mission. This effectively reverses centuries of theological imperialism in which models and attributes derived from timeless reasoning could be imposed in any given situation; and where theology indicates the path, the institutional church may well follow. Liberation theology (arguably) as a development of late modernity began with reading the Bible in particular socio-cultural and economic spaces, and found that not only were existing interpretations exclusionary, but that new and exciting readings of Scripture placed the poor at the centre of God’s loving gaze.

The trope of story allows us to place alongside the story told of God in Scripture and especially the account of salvation history, the stories told by Jesus (the challenges of the parables), and the stories of homeless people. These intersections moving from sacred to humdrum, from individual to communal, indicate the power of story not only to narrate our lives, but also to form and transform them – in a potential vector of holiness.

Setting aside for a moment what might be learnt, the volume of words in the stories required some shaping, lest all around be drowned in a sea of narration. So the crisis of homelessness became the fulcrum around which moved and overlapped causes and effects: health, relationships, childhood and adolescence, death, sexuality, crime, substance abuse, self-harm and suicide. People told their emotional stories of anger, pain and isolation, of independence and survival; some were almost incoherent telling a shapeless and chaotic narrative, others a well-ordered account; a few were coming back to life or returning home: ‘I’m still coming out of the fog of twenty years of living’. There were traditional images of God, wacky images of God, no images of God, and black, black humour. One man wondered why his suicide attempt in a remote spot had failed after he attached a hosepipe to the exhaust of his car and into the interior. He woke up the next morning slightly groggy to find he had prematurely run out of petrol; the final insult was that recovering the car was more than it was worth.

If theology has often begun in the wrong direction, the Bible offers rich images of home, homecoming and homelessness. The homeless origins of early Israel, the settled but enslaved nation in Egypt, the wanderings before the Promised Land and the forced expulsion from it, the ambiguity of New Testament Jerusalem and the emptiness of the cross, all suggest that absence of home is closely associated with re-thinking God’s meaning and purpose. The classic proverb of home in St Luke, as the two sons vie for their father’s attention, becomes under Nouwen’s careful scrutiny a proverb of welcome, as all are called to imitate the father in his graceful generosity.

The Church’s response to homelessness is a mixed economy too. The balance sheet discloses a caring organisation willing and able to provide shelter, food and advice; less willing and able to ask why there are homeless people at all. Faith in the City from the Church of England in 1985 caused a political furore in Thatcherite circles, but it is possible that its more radical suggestion, never properly pursued, was its inductive liberationist theology. Had the Church followed that more closely, divisions around women bishops and gay priests might have been attenuated. One of the things that homeless people bring, therefore, is the ability to hold up a mirror to ecclesial institutions; and what is reflected is not always pretty.

Homeless people also teach that the Trinity can be re-imagined. A homeless God may be one of the few things that could draw the attention of secular and church authorities: God the Father, compassionate father of those who are homeless; God the Son, radical storyteller; God the Holy Spirit, power to tell the story anew. One of the challenges, both theological and pastoral, is to convince homeless people of the importance of the message and teaching they bring. It is not enough for us to say a polite thank you and then use their stories to rebuild and renew our churches; that would be a further addition to their pluriform losses.

I finished work on this book with sufficient distance from the beginning of the Western economic (and related political) crises in 2008 and as the international pressure of the Occupy protests was strengthening; while changes to UK social housing provisions and benefits were being introduced. At the point of writing this blog, I am struck by the contrast between a ‘bedroom tax’ – about to bite – and a ‘mansion tax’ – a distant theory. Superficially more innocuous, new attempts are being made to revive and encourage house purchase in the UK. Political amnesia would suggest that the causes of the current economic difficulties deriving from the US housing market have been forgotten. Beyond the return of housing as a social / economic / political issue, what could be said theologically here?

By looking at the contrast between housing and home, the extent to which the market dominates is uncovered, while the human and nurturing aspects of home are set aside. Note the phrase ‘broken home’ and its implications compared to the rarely seen ‘broken house’. These changes are part of a wider dynamic in the commodification of human life; housing, health, education, desire, social care, incarceration, all are open to commercial contract. Human covenant is given short shrift, either the covenant between human beings, or between humans and Creator. At best this is to misunderstand and minimise human existence, at worst it is blasphemous worship of idols. The tragedy for all lies in this repeated cycle of forgetting and being made to remember; Pharaoh the enslaver of Israel being forced to witness the plagues that infected his country, Israel the chosen turning their backs on Yahweh and enduring the exile, the religious elite of the Sanhedrin confronted with the stone rolled back and the tomb emptied.

If in these contemporary processes of neo-liberal development we are all touched by homelessness – for some in a metaphorical sense of ennui, others more literally as refugees and with the absence of shelter – then now is the moment to re-conceptualise our human relations. Homeless people have stories which can help.

Revd Dr David Nixon is an Anglican Parish Priest in Plymouth. His interest in social exclusion/inclusion began during a curacy in the same city, working with charities and local organisations concerned with housing, homelessness and community development. As a part-time research fellow at Exeter University, he also worked with the No Outsiders research team investigating education and sexualities in primary schools, and has published widely in academic journals in this area.