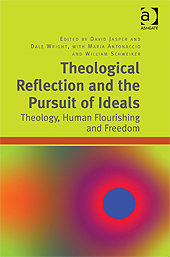 Theological Humanism has its roots in an interdisciplinary vision that views human life across and beyond the boundaries that haunt the humanities, social sciences and theology. It suggests that human life is driven exclusively by neither God’s will nor by human flourishing, but is undertaken with a sense of responsibility for the integrity of life. While continuing to think theologically, such a project seeks to establish ways of life that are truly worthy of being human, and it is this imperative, and the ideals that drive it, that underlie the essays in Theological Reflection and the Pursuit of Ideals.

Firmly rooted in theology, this volume of essays is also highly interdisciplinary, drawing upon the work of philosophers, literary critics, scientists, ecologists and others in the ‘pursuit of ideals’. Its origins lie in a complex and yet clearly articulated conversation that has taken to itself the name of theological humanism and which is most accessibly expressed in the Blackwell ‘manifesto’ written by David E. Klemm and William Schweiker, published in 2008 under the title Religion and the Human Future.

In that book Klemm and Schweiker argued that the measure of human life is provided for exclusively by neither, on the one hand, God’s will, nor, on the other, human flourishing. The key phrase of the book was human ‘responsibility for the integrity of life’ – and it was upon this basis and balance that an international group of scholars gathered in the Divinity School of the University of Chicago in May 2011 to further the work of theological humanism and explore for our own time the possibility of the flourishing of human culture across a range of ideals such as the spiritual, the moral, the aesthetic, the political, the philosophical and the ecological. It is well aware of the ambiguous character of religion in our contemporary, global culture, yet sets it firmly at the centre of the integrity of life in both its ground and in what is transcendent to it. In this gathering and its presentations this book has its origins.

Most of the contributors to this volume are colleagues, friends or former students of Professor David Klemm of the University of Iowa, to whom the book is dedicated. Beginning with an essay by William H. Klink and David Klemm himself (both of the University of Iowa) on freedom, using models drawn from the physical sciences, the following two papers by William Schweiker and Maria Antonaccio consider the question of the ‘call’ of conscience and ethics, and the issue of spirituality and spiritual integrity in contemporary culture.

Chapter Four by Glenn Whitehouse (Florida Gulf Coast University) is the first of a number of essays which address ecological issues and questions of environmental sustainability in humanist terms, in Whitehouse’s case focussing upon the idea of integrity from the thought of Friedrich Schleiermacher. Other contributors concerned with ecological questions are Dan Boscaljon (University of Iowa), who uses the Heideggerian term of ‘poetic dwelling’ in a reading of Arthur Miller’s play Death of a Salesman, and Forrest Clingerman (Ohio Northern University) dealing with the issue of climate change in a close reading of Ian McEwan’s novel Solar.

More historically, W. David Hall (Centre College) explores Giambattista Vico’s account of memory as a form of spiritual practice and resource in the construction of ‘the integrity of life before God’. Andrew Hass (University of Stirling), in a more philosophical discussion, focuses on the return to Hegel in recent theological thinking, and the possibility of an ‘ethics of negation’, using particularly Hegel’s Science of Logic. One of the key terms in Hass’ essay is that coined by the medieval theologian Nicholas of Cusa, the coincidentia oppositorum, and this takes us directly to the thought of the theologian Thomas J. J. Altizer (State University of New York) in a typically reflective and poetic essay on the Mystery of Catholicism, with a particular focus on James Joyce’s Finnegans Wake. Philosophy is further present in Pamela Sue Anderson’s (University of Oxford) consideration of Kant’s ‘ideal of immortality’, giving attention to the post-Hegelian Kantian philosophy of Paul Ricoeur, read by Anderson in dialogue with David Klemm’s theological idealism and examining the urge, found in the work of Ricoeur, of ‘deep living up to death’.

The literary themes and references which undergird so many of these papers are developed further in David Jasper’s (University of Glasgow) essay, which is entitled ‘The Artist and the Mind of God’. Like Boscaljon, Jasper employs Heidegger’s notion of ‘dwelling poetically’ to examine the role of artists and poets in the human striving for wholeness and integrity. In chapter twelve, Dale S. Wright (Occidental College) identifies distinct forms of historical awareness that have emerged in the course of human history, using the work of Heidegger, Gadamer and MacIntyre to explore the recent development of ‘reflexive self-awareness’ as it opens evaluative possibilities that have not previously been available.

Finally, Julia A. Lamm (Georgetown University) offers a reading of Julian of Norwich and the two seemingly incompatible medieval social roles of motherhood and lordship which are intricately linked in Dame Julian’s theology of grace, whereby ‘the divine motherhood redefines what it is to be lord, and the divine lordship raises the social status of motherhood’.

As a collection of essays, this book offers a rich and diverse, yet clear and coherent claim for the role of theological reflection in contemporary efforts to articulate the deepest values and ideals in society. They bring to the forefront the task of critical theological thinking in a highly interdisciplinary context. Thus its claim, finally, is a bold one: theological humanism provides a new and innovative orientation for work across the broad spectrum of the humanities today.