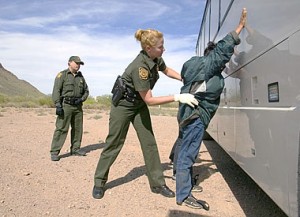 In fact, so the argument goes, these measures must be substantially in place before illegal immigrants can gain a legal status; otherwise politicians will succumb to the temptation of ignoring the enforcement measures once the legalization has taken place. For example, the Secure Fence Act of 2006 required that almost 700 miles of fencing be built across the U.S.-Mexico border, but today less than 40 miles of the fence has been built to the specifications of the law because of foot dragging and lack of funding. If enforcement measures must be put in place before supporters of immigration reform can achieve their policy goals, then those measures are more likely to be completed.

The bill passed last month by the Senate (the Border Security, Economic Opportunity, and Immigration Modernization Act) shows the influence of this enforcement first argument. The bill proposes a two-step process for illegal immigrants currently in the U.S. to gain legal permanent residence (LPR). First, after meeting certain requirements, they can apply for a new Registered Provisional Immigrant (RPI) status, which can be held for two consecutive six-year periods. After ten years, those with RPI status can apply for LPR status, and then after three years as legal permanent residents they are eligible to apply for naturalization. The bill also stipulates, however, that before any immigrant can move from RPI to LPR status, the Department of Homeland Security must certify to Congress that the bill’s enforcement measures have been successfully implemented. These enforcement measures include the construction of further fencing along the border, doubling the number of Border Patrol agents on the border, a system for tracking people who leave the country through airports and seaports to apprehend people who have overstayed their visas, and a nationwide system for employers to verify their legal status.

Critics of the bill, however, claim that it will not achieve the desired outcome of ensuring that immigration policy is enforced. They point out that no enforcement measures, apart from the drafting of a strategic plan, are required before illegal immigrants are granted legal status, albeit the temporary RPI status. They argue that executive officials will drag their feet on implementing the enforcement measures, and that when the time when the immigrants are eligible for LPR status arrives, the political pressure to grant the status despite the failure to achieve the enforcement objectives will be too great. Millions of illegal immigrants will be granted legal permanent residence status, and in many cases a path to citizenship, without any serious improvement to immigration enforcement. These critics go on that there should be measurable progress toward enforcement before any sort of legal status is provided to illegal immigrants.

The vast majority of illegal immigrants attempt to enter the United States because of a lack of economic opportunity in their home countries. Many are poor with little education, from tiny rural villages or from the large cities, and are unable to find work necessary to support their families. Others are more educated and qualified for professional jobs, but opportunities in those career fields are unavailable.

These immigrants are unable to enter the country legally because of the peculiarities of the U.S. immigration system. Under current law, an unlimited number of spouses, dependent children, and parents of U.S. citizens are able to gain LPR status each year. Most people who desire to immigrate, however, are not related to a U.S. citizen. Every year a set number (usually around 250,000) of adult children and siblings of U.S. citizens and spouses and children of legal permanent residents are also granted LPR status. These visas, however, are limited by country so that only seven percent (therefore, less than 20,000) can be given to people from any single country. About 150,000 LPR visas are also granted based on employment, but these are also subject to per-country limits of seven percent, and are also skewed toward high-skilled professions, limiting the opportunities for many potential immigrants. Temporary work visas are also available, although many of these are also reserved for high-skill immigrants.

Therefore there is a huge mismatch between the demographics of the people pushed toward immigrating and the visas that are available, creating a situation in which immigration policy is unenforceable because it is unrealistic. Of course every immigrant, just like anyone, is responsible for their own actions, and laws should not be changed just because people break them, but political prudence also recognizes that no matter how well-intentioned a law, that law can be completely impractical given the realities of human behavior. The classic example from U.S. history is the prohibition of alcohol. Faced with widespread flouting of the law, the proper solution was to change the law, not ramp up its enforcement. Given that many illegal immigrants are willing to risk kidnapping, extortion, rape, separation from family, imprisonment, and in many cases death, to reach the United States, the pressures impelling people to immigrate illegally must be profound, and much more worthy of recognition than the love of drink. Also, as recent years have shown, given the scale of the illegal immigration problem, truly effective immigration enforcement will not be possible without bringing with it racial profiling by the police, the violation of the rights of Hispanics who are U.S. citizens or legal residents, and the abusive treatment of illegal immigrants, a situation that is politically unpalatable.

The problem with an “enforcement first” approach to immigration, then, is that if the obstacles to legal immigration are removed, then the number of illegal immigrants would drastically decline without the effort, cost, and politically problematic militarization of the border associated with the enforcement measures now being proposed. The per-country limits on family and employment-based visas are irrational and should be eliminated or adapted to match real life migration patterns. Greater opportunities should be provided for low-skill immigrants who are most in need of new opportunities.

The Senate’s immigration bill to some extent accomplishes these goals through its changes to the legal immigration system. Perhaps the most radical change is the elimination of the cap on immediate relatives of legal permanent residents (although the bill also eliminates visas for U.S. citizens’ siblings and children over 31). For those not related to people residing in the U.S., the bill also creates relatively large guest worker programs for agricultural workers and other low-skill workers that would provide opportunities to many who might otherwise immigrate illegally. The enforcement mechanisms, even if they might have been politically necessary, are in fact costly and counter-productive.

The reality is that in other situations where the law is grossly impractical, conservatives (and most advocates of “enforcement first” policies are conservative) have recognized that a change in the law, rather than enforcement, is necessary. For example, the Peruvian economist Hernando de Soto is well-known for explaining how in many developing countries, arcane laws make it difficult if not impossible for everyday people to legally establish businesses or gain title to their property, creating a vast informal sector. De Soto advocates for the streamlining or elimination of these laws to unleash untapped economic potential. Many conservatives (see here, here, here, here, and here) have lauded De Soto’s ideas. I have never read anyone advocate that the thousands of informal merchants currently engaged in business must be punished before the process of legally establishing a business is made easier, or that governments should spend large amounts of money on law enforcement to go after informal businesses before needed reforms are enacted. The reason is because conservatives see these informal workers in a positive light, as entrepreneurs. Therefore they can see that the law is the problem, not the workers. When looking at the immigration issue, then, this reminds us that the important question is how we perceive immigrants and what kind of immigration policy we want. For those of us who support greater legal immigration, “enforcement first” is a red herring and counter-productive. We should focus on making the case for expanded opportunities for legal immigration.

One thought on ““Enforcement First” Is Flawed Immigration Policy”