We’ve said it over and over this past week. “Hello, Federally Recognized Wife!” It’s part of our celebration of and wonder at the U.S. Supreme Court’s decision in Windsor v. United States. Two women whose geekiness usually remains in the categories of sports trivia (her) or musical theatre (me) were in offices at churches across town from each other last Wednesday morning, following the updates on SCOTUSblog. I sat in disbelief, reading the results at as many news outlets as possible to reassure myself I was not dreaming.

By a 5-4 decision, the Supreme Court said that the Defense of Marriage Act, Section 3, is unconstitutional. It demeans and humiliates legally married same-sex couples, creating a stigma and denying 5th amendment rights. In his majority opinion Justice Anthony Kennedy used those words: stigma, demean, humiliate. He raised, more than once, a concern about the impact on the children of gay and lesbian couples. He made it clear that he regards us as families, just like other families, deserving the same legal protections assumed when two straight people marry. 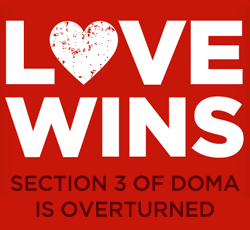 As a woman who came out late, after being in a straight marriage, I had no idea how many rights and benefits redounded to me simply because of a $40 fee and the resulting license. Straight people don’t have to think about it. It’s easy to take automatic things for granted. I didn’t really start to think about these questions in practical terms until I served a church in Maine and heard the stories of two lesbian couples in the congregation. One couple, both professionals in the insurance industry, owned a lovely home and were raising two adopted children. They had the resources to pay a lawyer to insure the legal ties they needed to visit each other in the hospital and to both be parents to their children, legally. None of that could help them with tax issues, but on the whole they had created a secure net for themselves and their children. The other couple did not have such financial resources. One worked in social services; the other did a series of part-time jobs while also running their organic farm. While the first had health insurance, she could not share it with the second, and so they prayed no disaster would befall them.

Both those couples live in a state where marriage equality became the law at the end of 2012. When they marry legally, they will be federally recognized, too.

My wife and I were married in church, with a license, in Massachusetts, but we live in Pennsylvania, where our marriage is not legally recognized.  I have health insurance through my spouse because her denomination recognizes the place of celebration rather than the place of residence. I am privileged. If the decision in the Prop 8 case points to States’ Rights, what has the court done for us? The court has opened the door for another branch of government to provide leadership. In short order, the Secretary of Defense announced that benefits would be made available to military spouses, clearly without regard to their place of residence, which is outside their power to control. The Office of Personnel Management made a similar announcement regarding federal employees.

“The OPM guidance issued Friday was noteworthy in that it drew no distinction between legally married gay and lesbian employees living in states that permit them to marry, or in states that still forbid such unions.  The memo appeared to indicate that the benefits would be keyed only to the status of legal marriage of the employee, wherever it was performed and regardless of where they now live.” (Lyle Denniston, SCOTUSblog)

The next step we wait for is the direction given to federal agencies that deal with regular people. How will the IRS and the Social Security Administration view people like us? Will they extend benefits and rights based on the place of celebration, or the place of residence? And what kind of strain will that create when federally recognized spouses are not also recognized in the states where they live? I assume it will be a bonanza for accountants and tax preparers, but I also imagine it will create additional burdens for ordinary folk, like the second couple in my example above.

Which will lead to more court cases…

It’s striking that the legislative branch cannot be part of this movement toward inclusion. The Supreme Court’s narrow decision represents a divide in the country, but a majority of the court ruled in the way polling would indicate a majority of the people believe is right. The House and Senate, dependent on re-election to retain power, stagnate and bellow across the aisles, 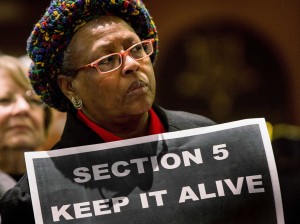 How can our three branches of government work together when there is such disrespect within and among them? Justice Scalia’s dissenting opinion in Windsor criticizes the court for “an exalted notion of the role of this court in American democratic society,” yet he seemed perfectly comfortable with the court’s exalted role in deciding the Voting Rights Act case just the day before. In that case a similarly narrow majority ruled that we live in a world where there is no longer a need for special oversight of voting in traditionally racist locales, in response to which traditionally racist locales immediately began changing their rules to make it harder for people of color to vote.

It’s the 4th of July, and as is the tradition in my family, we’re going to watch the musical “1776.” My older kids know every note and word by heart, and we have a new little brother to indoctrinate, brought into our lives by my federally recognized marriage to his mother. The message of the film is that democracy is messy, argumentative and essential to any forward movement. Toward the end of the film, our heroes give in on slavery, and we feel sick with them. John Adams poses the question, “Is anybody there? Does anybody care? Does anybody feel like I feel?”

He wasn’t all that different from most of the other delegates. On a survey form, they would have checked off many of the same boxes. They were white and male and mostly Protestant with a smattering of “other;” they were educated; they were property owners. There are many more voices in the argument now, but they do not get equal recognition. For democracy to foster equal respect for all people, we need to hold each other and ourselves accountable and not step back when we’ve gotten what we want. We need to address the stigma of being unable to vote, the way it makes children feel when their parents can’t afford a car and therefore don’t have a driver’s license and will be turned away at the polls: it humiliates and demeans them. It counts them as less than full people, and that is a scary flashback to our national history that we must avoid at all costs.

People of faith disagree on these matters. I find that hard to understand when the Good News is so clearly for all. “There is neither Jew nor Greek; there is neither slave nor free; nor is there male and female, for you are all one in Christ Jesus.” (Galatians 3:28, Common English Bible) We are all one, all equally recognized by God.

Equal respect, equal protection, equal pay, equal citizenship: we need to keep working for the day we are all recognized equally, not just in the rhetoric of the court, but in the mundane realities of life.  We need to keep making the arguments, and showing up to tell the truth. We need to make room for people who don’t check off the same boxes we do to speak. We need to recognize them.