The God of Israel does not get so caught up in the national agenda that God neglects the prayers of individuals in pain. The best antidote to politics-as-usual is proper worship. Praising YHWH can keep our feet flat on the floor. As we worship the God who sees and the God who acts on behalf of the downtrodden, we seek to become like God. YHWH, rather than the human powers that be, becomes our model. In worship we become attentive to the things that God attends to, such as the grieving woman whose empty cradle signals an uncertain future.

Imagine with me what must usually precede a visit from heads of state. A team arrives to secure the area. They choose the most beautiful route to travel. They clean up trash, repair sidewalks, evict the unhoused whose camps on public land are perceived as unsightly, touch up the paint on aging buildings, and hang welcome banners. They consider how to secure that route by redirecting other traffic and by stationing security personnel at strategic points along the way. They carefully plan the program and hand-select those who will have the opportunity to greet the dignitaries, to dine with them, and to sit at the table to discuss pressing matters. Those people are coached on what to wear and how to act so that the entire visit flows smoothly with no unseemly interruptions.

Proximity to power cultivates shared priorities. Or as New Testament scholar Greg Beale puts it, “We become what we worship” (cf. Ps. 115:8).

The addressees of Psalm 113 are the “servants of the LORD” who are exhorted to praise the LORD (YHWH in Hebrew) (v. 1). No nation in all of history (v. 2) anywhere the sun touches (v. 3) upstages the God of Israel (v. 4a). YHWH outshines every resident of the heavenly realm (v. 4b). God is truly without peer (v. 5). What priorities might proximity to this divine power cultivate? How might worshiping this particular God shape us?

The description of YHWH’s greatness makes God feel remote and untouchable. But the psalmist hastens to add the most remarkable quality about YHWH. According to Psalm 113, YHWH’s arrival provokes an entirely different agenda from the standard rigamarole for dignitaries. The one who is “seated on high” looks “far down” on the earth. Rather than avoiding the down-and-outers, YHWH seeks them out.

God doesn’t send in a crew to clear out those who’ve assembled temporary shelters along the thoroughfares so that he doesn’t have to see it. Instead, those on the margins are the first stop on YHWH’s tour of earth. He personally “raises the poor from the dust, and lifts the needy from the ash heap.” They get a seat at the table! He invites them to dine with princes and take part in decision-making. This unrivaled God takes interest in us and acts on behalf of the marginalized. What a contrast with the way we usually experience the powerful!

Let’s zero in on this key verse so we don’t miss anything. What does it mean that God “raises the poor from the dust and lifts the needy from the ash heap”?

The “dust” is that from which the first human was made (Gen. 2:7) and where the serpent was consigned to slither (Gen. 3:14). More significantly, it is what humans become when our dead bodies disintegrate (Gen. 3:19). God reaches down to lift up one who is in such bad straits that they are all but dead.

The “ash heap” is another way of putting it. You may have heard of the “Dung Gate” in Jerusalem, presumably through which people exited the city to dump their trash. It’s the same word in Hebrew (cf. Neh. 2:13; Lam. 4:5). God reaches down to those who eek out an existence in the garbage dump. These he invites to sit with princes—a Cinderella story of epic proportions!

This act of reversal is even more dramatic than it may appear at first. For the power of “princes” is not a given (Ps 107:40; 118:9; 146:3). The Hebrew word nadiyb often designates someone who is generous with their wealth and their skills to contribute to the greater good (see Exod. 35:5, 22; 1 Chron. 28:21). These particular nobles retain their position with God’s approval, which means they have not participated in the exploitation of others. They now sit alongside those who were hanging by a thread when God exalted them.

While God’s generous engagement with the vulnerable is itself inspiring, another feature of this psalm stopped me in my tracks. The psalmist’s words here to describe the character of YHWH are not unique. The same words appear in the prayer of Hannah, a woman who lived this story.

In 1 Samuel 2, Hannah’s heart overflows with gratitude. Although loved by her husband, she was childless and repeatedly mocked by her sister wife. The angst of her empty arms drove her to pour out her heart in prayer. The God of Israel, the God of the Universe, listened. She was just one woman in pain–not even destitute–but God answered with the gift of a son.

Hannah had faith to see that this reversal of her situation pointed to something far greater. It pointed to the character of the Almighty God. YHWH did not just help one woman in need. YHWH is the kind of God who humbles and exalts. Psalm 113:7-8 is a nearly identical quotation of Hannah’s prayer in 1 Samuel 2:8.

The connection between this psalm and Hannah’s story is obvious, considering how the psalm ends: “He gives the barren woman a home, making her the joyous mother of children. Praise the LORD!” (Ps. 113:9) The God of Israel does not prioritize the national agenda at the expense of individuals in pain. Indeed, YHWH’s answer to Hannah’s anguished prayer also set in motion redemption for the entire nation of Israel, as her son was the prophet Samuel, who would anoint future kings of Israel.

Hannah’s prophetic vision of God’s larger purposes set the literary trajectory for the entire book of Samuel, a story of dramatic reversals. It tells of a priestly family gone amuck whose line ends while God raises Samuel to take their place. It tells of Saul, raised up to bring order to disorder. It tells of David, who replaces Saul after the latter proves unfaithful. The books of Samuel are a story of reversal.

But Hannah’s prayer and Psalm 113 also have something to say to us today. As we climb the ladder of success, the din of applause and the weight of public criticism make it more and more difficult to attend to the needs of others. With more authority comes more responsibility, but ironically, less proximity to those who could benefit most from the power we wield. Our models become the very people whose power we crave, and we become like them inch by inch.

Many people enter public service, education, or business in hopes of truly making a difference in the world. We don’t want the self-serving agenda and posh lifestyle of politics-as-usual. But the pressures of public life soon remove us from the spheres where we first became aware of the needs around us. Power can deaden our senses to the very people we intended to serve.

The headlines regularly tell us about leaders of all kinds who go off the rails – pastors and politicians, celebrities and CEOs. How can we keep from being the next crash-and-burn story?

The best antidote to politics-as-usual is proper worship. To whom are we directing our adoration? Praising YHWH can keep our feet flat on the floor. After all, the psalm is not simply a recital of what YHWH is like. It issues a call to praise YHWH for all these divine qualities. As we worship the God who sees and the God who acts on behalf of the downtrodden, we seek to become like God. YHWH, rather than the human powers that be, becomes our model. In worship we become attentive to the things that God attends to, such as the grieving woman whose empty cradle signals an uncertain future.

After all, what good is power if it is not harnessed on behalf of the powerless?

Psalm 113 presents us with a radical vision of stewardship that demands attention to the garbage dump, where men and women made as God’s image are languishing. Becoming like our God means turning our gaze toward the margins rather than the centers of power. It calls us to exercise our privilege on behalf of others. 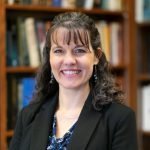