To be neutral in this world is similar to being cruel and being, ourselves, the oppressor. Following Jesus signals an end to neutrality.

25 Now large crowds were travelling with him; and he turned and said to them, 26‘Whoever comes to me and does not hate father and mother, wife and children, brothers and sisters, yes, and even life itself, cannot be my disciple. 27Whoever does not carry the cross and follow me cannot be my disciple. 28For which of you, intending to build a tower, does not first sit down and estimate the cost, to see whether he has enough to complete it? 29Otherwise, when he has laid a foundation and is not able to finish, all who see it will begin to ridicule him, 30saying, “This fellow began to build and was not able to finish.” 31Or what king, going out to wage war against another king, will not sit down first and consider whether he is able with ten thousand to oppose the one who comes against him with twenty thousand? 32If he cannot, then, while the other is still far away, he sends a delegation and asks for the terms of peace. 33So therefore, none of you can become my disciple if you do not give up all your possessions.

The challenge to a just world is not from the seen opponent but from the unseen enemy. Many elections are decided by a swing vote consisting of undecided and neutral voters. The damage they do by pressing the voting machine button or by putting a slip in the ballot is not trivial. And to think that perhaps nice people are ruining countries and political systems is not one bit heartening. The essence of the problem is the construct of a so-called neutrality, which far from being just is actually oppressive and grossly unjust.

But many systems, institutions and countries still swear by neutrality and the need for being neutral. The questions for us, then, are: Is the Bible neutral? And, was Jesus neutral in his ministry? Did he support the ruling dispensation and the authorities of his time? Or was he far from being neutral and instead openly supported the poor, the discriminated, and those at the margins? Was he just a powerful speaker who did not do what he said or were his actions larger than his words?

Luke 14:25–33 talks about a Jesus who seeks loyalty to himself and to God. I choose to concentrate on verses 25–27, in which Jesus says that someone cannot be his disciple without hating their father and mother, wife and children, brothers and sisters and even life itself. On the one hand, this is about a loyalty that we need to have to God over and above our family. On the other hand, this is a loyalty that is sought from us—to be loyal to those who need the kingdom of God and its values, which means a loyalty to the poor, the marginalized, and the oppressed in various ways. Simply seeing this as a loyalty to God would make us suspect the intention was a simple allegiance and fidelity to a higher realm. But it makes more sense to read the words of Jesus as showing our love, faithfulness, and allegiance to the cause that supports the poor and the oppressed.

In many cultures, and where I come from too, faith is more or less practiced as a neutrality. It means to follow God and the teachings of Jesus without sacrificing anything, without disturbing anything, and without taking sides. Bible readers and followers of tradition and faith continue talking about being neutral in their thoughts and actions. But how can one be a follower of Jesus and think about being neutral? What do we make out of the preferential option for the poor, as Gustavo Guttierrez would put it?

In verse 27, Jesus reminds us that whoever does not carry the cross and follow him cannot be his disciple. The cross is also a weight and a struggle. It is going against one’s own culture, privilege, and position. Our advantages are also the burdens we carry. Jesus is asking us to understand the baggage we carry and the burden places on us. By not taking a stand, we are afraid of carrying our cross because we don’t like to offend others. But religion and expression of justice cannot be undertaken without offending someone.

In India, reservations for oppressed and depressed communities have always been challenged by the middle class and upper middle class, belonging to the so-called superior castes. The argument, again, has to do with governments not being neutral and, thus, not giving equal opportunities to everyone. Hasn’t 75 years of independence in a country like India given enough opportunities for the people belonging to the lower castes to become educated and in positions of privilege, ask those belonging to upper castes? The privileged believe that reservations rob them of their opportunities to study and to get a job. Governments that even consider any form of reservation are accused of partiality and of not being neutral.

Kancha Ilaiah, a renowned Dalit scholar argues that all lower castes in India have been denied opportunities for quality education. Their culture and communities have never been taken into consideration when they have tried for admissions into universities and, as a result, they have not been graded in a just manner. Ilaiah says that colonial and Brahminical education norms have been thrust upon oppressed castes, whereas their own traditional wisdom and knowledge have not been taken into account when they are given opportunities or graded in schools and universities.

Jesus is asking us to move out of our so-called superior class and caste upbringings and leanings. In this there is bound to be a crisis in the household as well. Our community, family, parents, siblings, wife or husband, and children are going to differ with us in following the preferential option for the poor and oppressed professed by Jesus. Reservations for oppressed races and castes are going to be opposed for a long time to come. This is where a realignment is sought from us by Jesus. We are definitely going to be in conflict and the conflict is going to start in the home itself.

We are offered a chance to repent and reform by Jesus when he invites us to take up our cross. We have to accept our faults against the oppressed castes, races, and classes that have been going on for centuries. Correcting the injustices is going to take a long time. Until then, those who are going to prevent the upliftment of the oppressed castes and races, whether they are family or friends, are definitely going to be on the other side of the spectrum for followers of Jesus and his teachings. It need not be an eternal condition, but as Archbishop Desmond Tutu pointed out can be turned around through reconciliation that does not deny but ensures justice. May we carry our cross by exerting our preferential option for the poor and the oppressed. To be neutral in this world is similar to being cruel and being, ourselves, the oppressor. Following Jesus signals an end to neutrality. 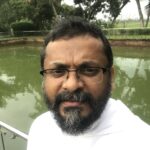 Fr. Jerry Kurian is Professor of Communications at the St. Ignatius Theological Seminary, Kerala, India. Prior to this appointment, he worked in theological colleges and seminaries in Kerala, Bangalore and Salem. His interests are in theatre, social media and internet, alternative journalism, blogging, and preaching.