How can White U.S. Christians in this moment love Asian American and Pacific Islander bodies, without succumbing to the seductions of commodification and ornamentation? How can we resist the impulses to only understand Easter’s resurrection through the lens of generative suffering?

Jesus himself stood among them and said to them, “Peace be with you.” 37 They were startled and terrified, and thought that they were seeing a ghost. 38 He said to them, “Why are you frightened, and why do doubts arise in your hearts? 39 Look at my hands and my feet; see that it is I myself. Touch me and see; for a ghost does not have flesh and bones as you see that I have.” 40 And when he had said this, he showed them his hands and his feet. 41 While in their joy they were disbelieving and still wondering, he said to them, “Have you anything here to eat?” 42 They gave him a piece of broiled fish, 43 and he took it and ate in their presence.

44 Then he said to them, “These are my words that I spoke to you while I was still with you—that everything written about me in the law of Moses, the prophets, and the psalms must be fulfilled.” 45 Then he opened their minds to understand the scriptures, 46 and he said to them, “Thus it is written, that the Messiah is to suffer and to rise from the dead on the third day, 47 and that repentance and forgiveness of sins is to be proclaimed in his name to all nations, beginning from Jerusalem. 48 You are witnesses of these things.

Touch may be the most political choice humans make. We are political bodies, making up a tangled body politic. Who we touch; how we touch; touch as consent or violation; touch as physical or psychic.

In this resurrection narrative of Luke for the third Sunday of Easter, Jesus doesn’t just invite his terrified disciples to see; he invites them to touch: to feel his flesh and its woundedness. It matters that Jesus asks them to touch him. Agency matters. It also matters that Jesus’ resurrection discourse here isn’t about his elevated or transcended spirit. He’s talking about his flesh. He invites people to touch it, to connect with his fleshiness. His flesh is hungry, and so he eats. He fleshes.

In this here place, we flesh; flesh that weeps, laughs; flesh that dances on bare feet in grass. Love it. Love it hard. Yonder they do not love your flesh. They despise it. They don’t love your eyes; they’d just as soon pick em out. No more do they love the skin on your back. Yonder they flay it. And O my people they do not love your hands. Those they only use, tie, bind, chop off and leave empty. Love your hands! Love them. Raise them up and kiss them. Touch others with them, pat them together, stroke them on your face ’cause they don’t love that either. You got to love it, you! And no, they ain’t in love with your mouth. Yonder, out there, they will see it broken and break it again. What you say out of it they will not heed. What you scream from it they do not hear. What you put into it to nourish your body they will snatch away and give you leavins instead. No, they don’t love your mouth. You got to love it. This is flesh I’m talking about here.

Flesh that needs to be loved.

Morrison via Baby Suggs is describing Black flesh that is both hated and sexualized, both commodified and deserving of love beyond valuation. Hortense Spillers writes that “before the body, there is flesh…a primary narrative (67).” When bodies were stolen and sold, those violations were felt in the flesh. This flesh is divided – not unlike how Baby Suggs names individual parts of the body – what Spillers calls atomized: each part becoming a commodity, a thing.

This separated flesh is used to build a sort of Frankenstein’s monster of a (European male) human. Profitable pieces of people are bought, sold, and studied. Race is called a science. Slavery economies are called Southern ways of life. The slave bible is created, redacting any hope of theologies of freedom. This is what Spillers means by the flesh as a cultural text: the modern idea of what a human is (with human meaning European, male, and likely Christian) is hellishly crafted from the flesh of people named less than human. Their flesh is loved only for what can be made of it. And their flesh gets used to remake monsters of whiteness all the time.

The Black female body is not the only flesh used to make this Frankenstein’s monster of the European Christian man. Recent days have once again brought to the fore the violence upon Asian American and Pacific Islander female bodies. Dr. Anne Anlin Cheng calls the particular subjection of Asian women ornamentalism, writing that this term “identifies a process whereby personhood is conceived and suggested (legally, materially, and imaginatively) through ornamental gestures: gestures that speak through the minute, the sartorial, the prosthetic, and the decorative (429).” The Asian female body has her personhood determined by the overlap between ontology (being) and objecthood. This means she is a decorative thing, “persistently sexualized yet barred from sexuality, simultaneously made and unmade by the aesthetic project (415).”  The violence of artful artifice.

Rev. Mihee Kim-Kort names this ornamentalism as an accessory to whiteness in her recent NYT article on the Atlanta murders of AAPI women, writing,

The Asian who is American is an accessory — the one you want for your group projects, or the one who makes your farms yield more. And the Asian woman who is American is simultaneously translucent, a mirror and a looking glass; she is a ghost, invisible, unknowable, stripped of her identity, making her both desirable and expendable. How else to explain how easily she is attacked?

Given all of this, how do I, as a White person and minister, love the AAPI flesh that has been ornamented and expended of in this way? Firstly, I do not touch their wounds without consent. Remember, Jesus asked the disciples to touch his wounds. As Dr. Christine Hong recently wrote in a Facebook post:

When BIPOC people are hurting, or anyone who lives under consistent systemic and personalized violence towards their embodiment for that matter, don’t ask them to help you help them. No more, ‘Can you tell me/teach me how to help you?’ Don’t ask them to teach you how, where, or why it hurts or what the medicine for the wound should be. It’s never a, ‘put your hands in my wounds and believe’ moment. Solidarity is movement. It’s simultaneous action in your own house, with your own people, and in the public square.

We also must not slip into the theological seductions of making suffering redemptive or generative: whether Jesus’ suffering or the suffering of AAPI women. In Luke, Jesus’ flesh bears the story of his suffering. His words also bear the story of his suffering. When Jesus says “you are witnesses to these things,” he’s not speaking of lofty prophetic speech or angelic utterances of hope. He’s not laying out a coercive mandate for conversion. He is speaking about his flesh; they are witnesses to his flesh. This flesh that —  in some sort of frankly hellish predestination — he claims “had” to suffer, die, and rise, writing salvation upon his scarred skin.

Jesus here sounds, to me, like pastoral encounters I had at Grady Hospital in Atlanta as a chaplain. When facing horrific trauma, many people would invoke all sorts of platitudes for why their heartache, their broken flesh, or the broken flesh of their loved one, “had” to happen. We’ve all heard it: “It’s God’s will.” “God has a plan.” Everything happens for a reason.” “It was their time.” I call this sort of utterance of inevitability a trauma response expressed through a theologically-saturated vocabulary. This utterance is inadequate to name what happens in suffering. It is a giving in to the impulse of “making” something of it, making suffering “mean” something, or “do” something.

But sometimes, inadequate or not, people need to say something in the moment of trauma. This sort of utterance is proof that when flesh feels so much pain, the words simply cannot keep up. What is said will always pale in comparison to what is felt. Jesus may have leaned into such logics of redemptive suffering, because his resurrection wasn’t just joy, it was trauma too. We theologians don’t seem to talk much about that. Being murdered by the state and then rising from the dead with the internal and external wounds of that experience is traumatic. Alive, and yet still bearing the smell and the scars of death.

Perhaps Jesus’ trauma led to his impulse to give clear explanations of it. Maybe his words were meant to somehow reassure his traumatized disciples. Maybe prophetic speech of inevitability was the only language he or those who wrote of him had in that moment. We cannot fully know. But we do not have to do this to believe in Easter. We do not have to make all traumatized flesh mean something, or do something, or teach something.

We do not have to further ornamentalize the flesh of Xiaojie Tan, Daoyou Feng, Soon Chung Park, Hyun-Jung Grant, Yong Ae Yue, and Suncha Kim to make their murders a teachable moment, an example, or a decoration in our self-avowals of being liberated from our whiteness. We do not need to make the deaths of Delaina Ashley Yaun Gonzalez and Paul Andre Michels an object lesson to teach us what we already know to be true about White male gun violence in this country. That is not loving their flesh, and it is not loving their memory. These humans deserve so much more than the double violation of becoming the felled flesh upon which White U.S. Christian identity reasserts itself as all manner of “woke” descriptors: progressive, reconciling, healing, and mostly, loud.

How, then, can White U.S. Christians in this moment love Asian American and Pacific Islander bodies, without succumbing to the seductions of commodification and ornamentation? How can we resist the impulses to only understand Easter’s resurrection hope through the lens of generative suffering?

We can only touch wounds – physically, emotionally, theologically – when explicitly invited to do so.

We can do the deep personal work of exploring the entanglements of our whiteness with our so-called wokeness. We are the “yonder” Baby Suggs is preaching about.

We can be witnesses.

We can be watchers, but not impotent bystanders in moments of racism and violence.

We can be listeners.

We can be practitioners of repentance, who never demand forgiveness of those whose pain and suffering is not written in our own flesh.

And we can attend to our own flesh: loving and feeding our own bodies in ways that do not require the diminishment, decoration, or demonization of another.

We can believe resurrection is possible, while also believing that we are not saviors or the mediators of it.

Love your flesh. Love the flesh that isn’t yours. Imagine a resurrection beyond generative suffering; a resurrection that’s not just the artificial reanimation of a Frankenstein’s monster of whiteness. Dare to imagine life that does not demand death. 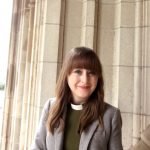 Whitney Wilkinson Arreche is a doctor of theology candidate at Duke University, researching decolonial and antiracist theologies. She is a Presbyterian Church (U.S.A.) minister and serves on her denominational General Assembly Committee for Ecumenical and Interreligious Relations and on the leadership team of Liberating Church – a project drawing wisdom from the antebellum hush harbors to shape the imagination and praxis of the church. She has been published in the Christian Century and the Presbyterian Outlook. She lives in Texas.