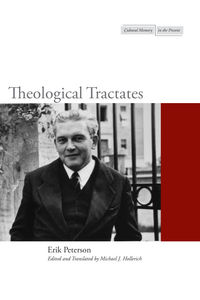 This book grows out of my long-standing interest in the theology and scholarship of Erik Peterson (1890-1960), who taught New Testament and early church history on Protestant theological faculties at Göttingen and Bonn in the 1920s, before converting to Roman Catholicism and moving to Rome in the 1930s. Peterson today is likely known to two rather different sets of readers: specialists in the study of early Christianity, especially esoteric corners such as liturgy, asceticism, and apocryphal literature; and theologians and other theoreticians with an interest in political theology. The former group would be familiar with Peterson’s numerous technical publications, spread over the course of four decades of research. The latter would know him mainly through the “Monotheism” monograph, but might also be aware of other essays he had written for a learned but not necessarily specialized audience. They are the readers who will most likely be interested in the present volume, which consists of translations of papers Peterson published between 1925 and 1937, including the “Monotheism” treatise, on which more in a moment. In 1951 those papers were gathered together for republication for a general audience, under the title of Theologische Traktate, which has since been reprinted in an ongoing series of volumes of Peterson’s papers edited by Barbara Nichtweiß, his biographer, and several collaborators.

Peterson produced little in the way of book-length publication, a fact explainable both by his intellectual temperament (he was by nature cautious and empirical) and his biography, as an academic and religious itinerant. His scholarly education (at Göttingen, where he was trained in the “History of Religions” school of interpretation) was in Christian origins. But he maintained wide-ranging religious, philosophical, and literary interests as well. He was well-connected with both the Protestant and the Catholic intellectual establishments of post-World War I Germany, a time and a place of exceptional cultural creativity. He was a close friend of both Karl Barth and Carl Schmitt, an intellectual pairing that gives you an idea of the breadth of his concerns and sympathies. After his conversion to Catholicism, he won a sympathetic following among French Catholics like Jacques Maritain, Yves Congar, and Jean Daniélou, making him in some sense a godfather of the nouvelle théologie and hence of Vatican II.

Readers of Political Theology’s blog will probably have a special interest in Peterson’s critique of political theology and his connection with Carl Schmitt. You should be aware first of all that Peterson’s “Monotheism” monograph is not a comprehensive treatment of the special political problems and corollaries that tend to accompany monotheistic belief systems. I am reminded to say this after reading Miroslav Volf’s blog (October 17), which discusses the religio-political ideas of Sayyid Qutb. Peterson’s treatise – it is really just a long essay, the length of which is nearly doubled by the dense annotation of (mostly untranslated) Greek and Latin sources – is strictly delimited in two respects: first, it is serving a theological thesis about the heretical nature of  “any such thing as a Christian political theology”, though in the event only one or at most two specific types of political theology are apparently envisaged in this sweeping verdict; and second, it is framed entirely in terms of the religious ideas, the political ideology, and the politics of the Roman Empire – the subtitle is to be taken seriously: “A Contribution to the History of Political Theology in the Roman Empire.” The only contemporary allusion is the rather cryptic concluding footnote, which says that Peterson was seeking to apply the “brief” and “not systematic” comments of Carl Schmitt’s 1922 treatise Political Theology to the specific instance of the Christian political theology of antiquity.

Peterson was confronting an ancient version of political theology (a term he does not explicitly define) that consisted of an ideological correlation of political structure and religious belief system: one God or highest power in heaven, and one emperor on earth. Versions of such a construct, he said, could be recovered in pagan, Jewish, and Christian sources, all serving the same purpose: to legitimate monarchical government by showing its cosmological roots and sanction in the belief that a single divine power is the ultimate source of the world’s diversity. In its Christian dress following the conversion of the emperors, this construct showed a particular affinity for theologies that emphasized the secondary character of the Logos (Word) and his subordination to God the Father. Peterson argued that the ultimate triumph of the orthodox dogma of the Trinity of three co-equal, co-eternal divine Persons vitiated the theological possibility of such an ideological correlation, and thereby of any Christian political theology whatsoever.

Christian critics of Peterson’s thesis object that he took “political theology” exclusively in the (conservative) sense of an ideological legitimation of existing power structures, and completely ignored theology’s social-critical function. It is true that Peterson’s focus was on structural correlation – that was how Schmitt himself had construed political theology in his 1922 book. It is also a fact that Peterson himself was no friend of left-wing politics of any stripe, whether liberal or socialist. This is someone who regarded the conversion of the Roman Empire as a providential dispensation and who excoriated “the principles of 1789” at every opportunity. But we mustn’t forget that the primary intellectual horizon of all of Peterson’s thinking – spirituality, theology, exegesis, you name it – was eschatology. It was the furthest thing from his mind to offer a legitimating benediction on the world as it is. He declared lifelong war on embourgoisement. As I state in the introduction to the new translation, in his sixties he was still saying that the sight of Christian complacency was enough to give him an existential heart attack.

This shows up in the closing pages of the “Monotheism” treatise in the form of Peterson’s endorsement of Augustine’s de-sacralizing of the Christian empire. That is admittedly not his precise language (I am borrowing here from Robert Markus’s “secular” reading of Augustine). But the idea is certainly there. It derives ultimately from Peterson’s acute awareness of the already-but-not-yet character of Christian eschatological expectation. The “eschatological proviso” of which modern theologians speak is actually Peterson’s coinage, mediated via Protestant biblical scholar Ernst Käsemann, who had attended Peterson’s lectures at Bonn.

The Augustinian peroration of the “Monotheism” treatise is a direct strike at the Catholic political theologies which sprang up like weeds in the euphoric months after Hitler came to power, Catholic versions of what Paul Althaus and Emanuel Hirsch were peddling to Protestants. Deluded Catholic conservatives talked themselves into believing that National Socialism offered a chance to reverse the course of secularization by resuscitating, in modern form, the medieval Holy Roman Empire. To promote the possibility, they proposed a Catholic Reichstheologie. Peterson told Catholic friends that his intention in the monotheism treatise was “to take a poke at the Reichstheologie”.

Ironically, Carl Schmitt was not in their company. Though early writings like Schmitt’s Roman Catholicism and Political Form (1921) had won him admirers among his fellow Catholics, by 1933 he had long since parted company from romantic reactionaries. Schmitt’s political sympathies were wholly with the very up-to-date Fascist experiments of Mussolini and his ilk – after 1933 it would require much dissimulation (not to mention outright terror) for him to have to swallow his statist outlook in favor of the dynamic and revolutionary populism of the Nazis. Nevertheless, Schmitt long suspected that Monotheism as a Political Problem was aimed at him. The closing footnote leaves the matter open. Nevertheless, by the late 1930s Peterson was certainly aware of the gulf that separated him from his erstwhile friend and discussion partner. The publication of Schmitt’s The Leviathan in the State Theory of Thomas Hobbes (1938), which seemed to endorse Hobbes’s unitary conception of the state, provoked Peterson to say that only a pagan could reject the Church’s potestas indirecta[1] in matters temporal and political.

Many years afterwards, when Schmitt was in his eighties and Peterson had been dead for a decade, Schmitt published Political Theology II: The Myth of the Closure of Any Political Theology (1970; now available in an English translation by Michael Hoelzl and Graham Ward [Malden, MA and Cambridge, United Kingdom: Polity Press, 2008]). The book is only in the most general way a continuation of the 1922 publication. Its real purpose is an angry denunciation of Peterson’s thesis on every conceivable ground: historical, political, logical, and even theological. Some of what Schmitt has to say is worth considering, especially about the relatively narrow compass of Peterson’s field of investigation. In other ways he seriously (willfully?) misconstrues Peterson’s intentions, which he represents as an attempt to create a safe, neutral space for theology and the Church to operate in – something that was utterly unacceptable to the author of The Concept of the Political, which had defined the political as “the total”, and had asserted that the effort to define what was and what was not “political” was in itself a political act. This is, as I say, a misrepresentation of Peterson’s intention. Far from claiming neutrality for the Church, he was asserting its superiority to the political sphere. If a religio-political category has to be framed for Erik Peterson, I suspect his sympathies were (in a way I hope more theoretical than real!) with the “activist monasticism” of the eleventh century Gregorian reformers of the papacy. That, at least, is one reading of his “politics”, insofar as there is one to be found, in the essays collected in Theological Tractates. Readers who doubt me are invited especially to ponder the final essay, Witness to the Truth, a Kierkegaardian meditation on martyrdom, the Book of Revelation, and the Gospel of John. It appears to deny legitimacy to any regime that does not recognize the (eschatological) kingship of Jesus Christ.

[1] The phrase means “indirect power” and was coined by Robert Bellarmine (1542-1621), the great Catholic apologist from the time of the Counter-Reformation. Bellarmine sought to defend the Catholic Church from the charge of seeking direct power over temporal and political affairs, while retaining the traditional claim to intervene “by reason of sin” (ratione peccati), i.e., when a serious moral or religious matter was involved. Schmitt’s preoccupation with the weakened modern state (that was his view, at any rate) made him fiercely opposed to all competing social agencies that might seek to co-opt the political.