In “A Public Faith” I offer a sketch of an alternative to totalitarian saturation of public life with a single religion as well as to secular exclusion of all religions from public life. I write as a Christian theologian to followers of Christ. I am not writing as a generic religious person to adherents of all religions, a project that would fail from the start. To stay with the example of Qutb, it is a task of Muslim scholars to elaborate distinctly Islamic alternatives to Qutb. My task is to offer a vision of the role of the followers of Jesus Christ in public life, a role that stays clear of the dangers of both “exclusion” and “saturation.” 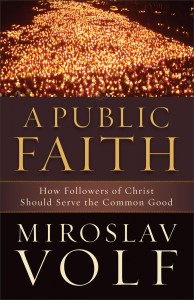 Debates are raging today about the role of religions in public life, and it is not difficult to see why. First, religions—Buddhism, Judaism, Christianity, Islam, and so on—are growing numerically, and their members worldwide are increasingly unwilling to keep their convictions and practices limited to the private sphere of family or religious community. Instead, they want these convictions and practices to shape public life. They may engage in electoral politics and seek to influence legislative processes (as the Religious Right has done in the United States since the Reagan presidency), or they may concentrate on transforming the moral fabric of society through religious awakening (as the Religious Right seems to be doing during the Obama presidency). Either way, many religious people aim to shape public life according to their own vision of the good life.

Second, in today’s globalized world, religions cannot be neatly sequestered into separate geographic areas. As the world shrinks and the interdependence of people increases, ardent proponents of different religions come to inhabit the same space. But how do such people live together, especially when all of them want to shape the public realm according to the dictates of their own sacred texts and traditions?

When it comes to the public role of religions, the main fear is that of imposition—one faith imposing aspects of its own way of life on others. Religious people fear imposition—Muslims fear Christians, Christians fear Muslims, Jews fear both, Muslims fear Jews, Hindus fear Muslims, Christians fear Hindus, and so on. Secularists, those who subscribe to no traditional religious faith at all, fear imposition as well—imposition by any faith—since they tend to deem all of them irrational and dangerous.

The fear of imposition of religious views often elicits demands for the suppression of religious voices from the public square. The people espousing that view argue that politics, one major public sphere, should “remain unilluminated by the light of revelation” and should be guided by human reason alone, as Mark Lilla has put it recently.[1] This is the idea of a secular state, forged over the last few centuries in the West.

Unlike those who think religion should stay out of politics, I argue that religious people ought to be free to bring their visions of the good life into the public sphere—into politics as well as other aspects of public life. What’s more, I believe that it would be oppressive to prohibit them from doing so. But as soon as one starts making such an argument, some people raise the threat of religious totalitarianism.[2]

For many secularists today, militant Islam, represented by a figure like Sayyid Qutb, shows how religions, if allowed free reign, would behave in the public realm. This represents a massive misunderstanding of religions, but it is the ghost that haunts discussions of the public role of religion. To get this “ghost” clearly into view, I will sketch briefly Qutb’s position as articulated in Milestones, a short and revolutionary book he wrote in prison (1954–64), which earned him a death sentence in 1966. Qutb has been described as “the godfather of radical Islam”; what Marx was to Communism, it is said, Qutb has been to radical Islam. This is an exaggeration. It is true, however, that he has been “the major influence on the worldview of radical movements across the Muslim world.”[3] To me, he is the most compelling and presently most influential representative of what I would describe as religious totalitarianism—more intellectually rigorous than contemporary Christian representatives of religious totalitarianism, such as the so called “dominion theologians.”[4] The position that I myself advocate in A Public Faith is an alternative both to the secular total exclusion of all religions from public life and to Qutb’s total saturation of public life with a single religion.

I am a Christian and Qutb is a Muslim. But the contrast I am drawing is not between Christian and Islamic positions. For a great majority of Muslims, Qutb’s position is completely unacceptable, faithful neither to the authoritative sources of Islam nor to the centuries-long experience of Muslims with a variety of political arrangements in many parts of the world. The contrast is rather between religious political pluralism and religious totalitarianism. The position I designate here as “religious political pluralism” emerged within Christianity, but it is not the Christian position. Not all Christians embrace it, and some in the last few centuries have strenuously objected to it. Inversely, among people of faith, it is not Christians alone who today embrace religious political pluralism. Many Jews, Buddhists, and Muslims, among others, embrace it as well.[5]

Here is the bare-bones sketch of Qutb’s argument:

Qutb sums up the internal constitution of the Muslim community in the following way: “No god but God” means “no sovereignty except God’s, no law except from God, and no authority of one man over another, as the authority in all respects belongs to God.”[9] A community that embraces these principles as a way of life is a Muslim community. It is exclusive and its rules regulate all aspects of its members’ lives. This is its internal constitution. What about its external relations?

Imposition of the rule of one God, as interpreted by the prophet Muhammad, on the whole world—this is the mission of political Islam as interpreted by Qutb. There can be religious freedom properly understood only within a political order that embodies the Muslim way of life. Political Islam is religious at its basis, and, unlike the mainstream of Islam, it is aggressively totalitarian in its character.[11]

In A Public Faith I offer a sketch of an alternative to totalitarian saturation of public life with a single religion as well as to secular exclusion of all religions from public life. I write as a Christian theologian to followers of Christ. I am not writing as a generic religious person to adherents of all religions, a project that would fail from the start. To stay with the example of Qutb, it is a task of Muslim scholars to elaborate distinctly Islamic alternatives to Qutb. My task is to offer a vision of the role of the followers of Jesus Christ in public life, a role that stays clear of the dangers of both “exclusion” and “saturation.”

My contention is that there is no single way in which Christian faith relates and ought to relate to culture as a whole. The relation between faith and culture is too complex for that. Faith stands in opposition to some elements of culture and is detached from others. In some aspects faith is identical with elements of culture, and it seeks to transform in diverse ways yet many more. Moreover, faith’s stance toward culture changes over time as culture changes. How, then, is the stance of faith toward culture defined? It is—or it ought to be—defined by the center of the faith itself, by its relation to Christ as the divine Word incarnate and the Lamb of God who takes away the sin of the world.

The center of the Christian faith suggests a relation to the broader culture that can be roughly described in the following six points:

This is, in broad strokes, the alternative that I propose to religious totalitarianism.

[6] For traditional Jews and Christians no less than for Muslims, this is an uncontested claim. But many followers of Abrahamic religions consider the implications Qutb draws from it deeply problematic.

[11] At the end of Milestones Qutb underscores that the fundamental struggle in the world today is a religious one, not economic, political, or cultural. “The struggle between the Believers and their enemies is in essence a struggle of belief, and not in any way of anything else. The enemies are angered only because of their faith, enraged only because of their belief. This was not a political or an economic or a racial struggle; had it been any of these, its settlement would have been easy, the solution of its difficulties would have been simple. But essentially it was a struggle between beliefs—either unbelief or faith, either Jahiliyyah or Islam” (ibid., 110).

[12] On the relationship between religious exclusivism on the part of Christians and Muslims and the embrace of pluralism as a political project, see Miroslav Volf, Allah: A Christian Response (San Francisco: HarperOne, 2011), chap. 12.

Used by permission. All rights to this material are reserved. Material is not to be reproduced, scanned, copied, or distributed in any printed or electronic form without written permission from Baker Publishing Group.

One thought on “Miroslav Volf on Public Faith”