Political practices have more in common with literary techniques than one might assume. In reflecting on how we build worlds to inhabit, political theology can draw on sources and themes from speculative fiction to help us imagine ourselves beyond the structures we inhabit.

The newest issue of the journal Political Theology collects essays exploring how engaging with speculative fiction can contribute to the field. It includes five essays probing topics and texts ranging from Planet of the Apes to Dungeons & Dragons, from Afrofuturism to the messianic. The issue is guest edited by Emanuelle Burton and Rick Elgendy. Their introduction follows:

“When I was preparing to write Parable of the Talents, I needed to think about how a country might slide into fascism — something that America does in Talents. So I reread The Rise and Fall of the Third Reich and other books on Nazi Germany…. I wanted to understand the lies that people have to tell themselves when they either quietly or joyfully watch their neighbors mined, spirited away, killed.” Octavia Butler

Building a world is both political and theological.  Both politics and theology require a network of underlying claims (implicit or explicit) about the operations of the world they seek to describe or to transform; this much is obvious, as is the necessary corollary that any imaginative world-building project offers a new sphere for the trying-on of political and theological thought and action. What is perhaps less obvious is that fictional world-building, which makes no direct claim to our own immediate present, extends this invitation to political and theological re-imagining no less potently, and often more so. The invented worlds of speculative fiction are fundamentally akin to those that drive much work in theology and political thought, insofar as they are built from a network of postulates about where our present could lead, or how our past might have led elsewhere. Yet the process of moral, metaphysical and political terraforming, and the acts of invention and inference that drive it, are made usefully conspicuous in speculative fiction. Attending closely to the worlds of speculative fiction thus helps reveal by contrast the habits of mind that direct our action through channels familiar and often basically conservative (though no less a product of imagination.)

Speculative fiction also invites us to live, imaginatively, in a world that is in some key respects unlike our own. Because these imagined worlds create bridges between where we are and where (such stories implicitly argue) we might have gone or might yet go, they not only invite but demand an open, critical encounter with possibility.  This invitation stands whether the world on offer expresses aspirations apparently far-off (for instance, the arguments of prison and police abolitionists) or plunges us vividly into a heightened version of the horrors of our present to strip away our self-consoling illusions (e.g. rhetorics invested in assumptions that “It Can’t Happen Here”).

Simultaneously, speculative fiction is helpful as a correction to our own limited understanding of the world we inhabit, the one we ostensibly know well.  Sometimes our expectations about reality are built on a tissue of magical thinking, a synthesis made of mystified causality or constrained by ideology, which is not recognizable to us because its flawed or artificial coherences are the only ones we know.  Some such myths and magic retain wide credibility, such as the notion that we can incrementalize our way out of the devastating effects of climate change, or that there’s no viable political alternative to operation through electoral means on the terms of a high school civics class.  If speculative fiction develops in us techniques for productive estrangement, it may help us get a hold on the fictive character of the worlds we build every day.  Speculative fiction in particular makes meaning through its relationship to present conditions (or to some particular moment in history), inviting us to consider alternatives to the world as it exists, and demanding we treat those alternatives as both significant and resonant with the concerns of the present.

This productive estrangement from the norms of one’s own world, and the expanded capacity to imagine a different world, has clear potential implications for the political imagination and thus for political theology. Insofar as political theology enacts a conscience for theology by pressing theological formations to make their political investments and implications explicit, its disciplinary conversations call for something that speculative fiction offers: an account of the worlds it might hope into being. Those worlds may be implicit in genealogical critique, gestured at by a liberative eschatology, or configured in relation to contemporary movements and action; in all its prevalent forms of operation, political theology uses imagination – indeed, often subtle forms of creative world-building – to depict the present and future.  Insofar as any explicit interaction with genre is also a way of creating ties of affiliation, of possibly reinforcing or reconfiguring relationships between texts and the worlds they represent, we appreciate the chance to read political theology here against or alongside other, different sorts of texts, optimistic about the potency of new connections.

This volume happens to come at a moment when we are all being forced to reimagine what the world is, and how much of our connective tissue was harmful or fraudulent or fantastic – how much of our old world was made up, and things that we thought were immutable were revealed as fragile.  The distinction between “skilled” and “unskilled” labor, which has for so long been used to justify to trap those we now call “essential workers” in poverty, seems to many now like a relic of an age that spun myths to cover vicious extraction.  Some segment of international populations previously willing and able to ignore police brutality around the world have spent serious time, however overdue, reconfiguring received narratives of law, order, and justice.  This is a moment when it is particularly important to be able to learn from speculative fiction, both to see through the thin fictions of our present and to cultivate a robust capacity to imagine both the near futures that we want and the ones we don’t.

We are delighted by the varied and inventive pieces we have to share in this issue, although it also has meaningful gaps. We did not receive enough submissions from and had limited success in recruiting authors from outside the U.S. and representing a diverse range of racial and ethnic backgrounds, and one very valuable planned contribution also had to be withdrawn; this leaves us lamenting the perspectives underrepresented here, a limitation that bears directly on the themes and stakes of this collection.  We maintain that these contributions are engaged responsibly with their sources and contribute to an important conversation, one that we hope will proliferate in ways that incorporate the range of perspectives that the journal and the Political Theology Network have built for some time.

The work here can (and we hope will) raise further questions, both for direct work on speculative fiction texts and on the scholarship that engages it. What does it mean – both as sign of future world and past inheritance – that this conversation includes non-Black thinkers imagining in conversation with Blackness?  What are the limitations on the forms of future agency we can imagine in relationship to the crushing horrors – notably, white supremacy, legacies of colonialism, economic immiseration, despoliation of the planet?  By what means can the worlds we conjure in text be layered onto or displace the worlds that we inherit from eras past, the worlds through which we move daily?  How do these worlds have entryways through concepts associated with political theology, such as law, grace, emancipation, authority/authorship, transfiguration?

The implicit argument of this issue is that the best political theological thinking addressed to such questions has a developed capacity for this kind of imaginative estrangement, and the best speculative fiction – whether or not it be “theological” in familiar ways – speaks to our hopes, fears, and possibilities on the strength of an affirmation of what’s past the horizon. 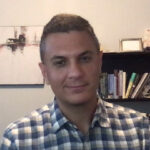 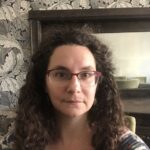 Rick Elgendy is Associate Professor of Christian Ethics and Public Theology at Wesley Theological Seminary. He holds a Ph.D. in theology and is co-editor of a contributor to “Renegotiating Power, Theology, and Politics” from Palgrave Macmillan.

Emanuelle Burton is Lecturer in Ethics for the Department of Computer Science at the University of Illinois at Chicago. She holds a Ph.D. in religion and literature and is coauthor of “Understanding Technology Ethics Through Science Fiction,” forthcoming from MIT Press.