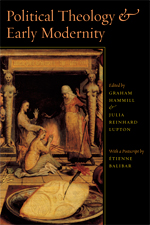 Let’s get this straight. Political theology is not the same as religion. Instead, we take it to name a form of questioning that arises precisely when religion is no longer a dominant explanatory or life mode. Political theology reflects and feeds on a crisis in religion, whether that crisis is understood historically (as Reformation) or existentially (as doubt, skepticism, or boredom). The last two decades have seen excellent work on the centrality of religion in the English Renaissance, from the groundbreaking historical work by Debora Shuger on the Renaissance Bible to the fine collection by Ewan Fernie on Spiritual Shakespeares, which explores the varieties of religious experience presented on the English stage. The norms and forms of religious life are, however, not exactly what concerns political theology, which finds its questions rather in the moments where religion is no longer working — but neither are the secular solutions designed to replace it. Such moments include the uncanny transformation of icons into idols under the pressure of reformation, the jarring encounter with strange forms of belief abroad and at home, and the disorienting friction between sacred and secular jurisdictions, calendars, economies, membership protocols, textual operations, and styles of violence.

We take the phrase “political theology” to identify the exchanges, pacts, and contests that obtain between religious and political life, especially the use of sacred narratives, motifs, and liturgical forms to establish, legitimate, and reflect upon the sovereignty of monarchs, corporations, and parliaments. Political theology is less a concept like sovereignty or the state of exception; or a form of government like monarchy, theocracy, or republicanism; or even a moment of historical transition from a worldview that is primarily theological to one that is primarily political. Rather, it is more like a coupling or entanglement of ostensibly discrete domains — the political and the theological — out of which early modern and modern concepts, forms of government, and views of history are born. Although political theology is strongly associated with state formation, its mechanics are also at work in the charters of towns, guilds and livery companies, the principles of household management and animal husbandry, and even the hieratic clustering of home furnishings. In both Reformation and Counter-Reformation settings, the cumbersome and incomplete transfer of iconographic capital and organizational capacities from the church to a range of civic and civil bodies not only defined and strengthened new centers of authority but also helped transform traditional religious practices and institutions by draining them of a portion of their aura. Bankrupting the Peter of the medieval Church in order to pay off the Paul associated with new forms of secular authority also produced subterranean and symptomatic forms of alliance between religion and politics in a modernity founded on their putative division.

In the study of early modern Europe, political theology is often used to name a gallery of icons, rites, and narratives associated with sacred kingship and the evolving offices of the state, themselves often drawn out of the administrative care of the royal household. In this collection, however, political theology takes on a second, more polemical meaning, in which politics and theology, understood as contest rather than alliance, delineates the schism around which early modernity is constituted. Less an ideology and more of a recursive crisis, political theology unlocks the occasion in which personal sovereignty transforms into its opposites: as citizenship, the corpus mysticum, the multitude, or civil society. Political theology is thus bound up in epochal breaks and period definitions: whereas “Renaissance” engages primarily with the challenge of antiquity, “Early Modern” concerns the wars of religion and the attempt to resolve the new heterodoxies and troubling new pluralisms of the Reformation in a secular key.

Political theology, then, is neither a set of themes nor a particular form of government, but rather a scene of recurring conflict — both that which defines the early modern period as the attempt to resolve the challenges of the Reformation and that which continues to unfold today as the impossibility of the state to totalize politics. There are many political theologies, western as well as non-western, ancient as well as modern, that could be associated with civil religion — the use of religious belief to ensure obedience to the state or other kinds of political community. In early modern Europe, however, political theology has the status of a founding event — an event that, from backward glance of the twenty-first century to be sure, makes early modernity modern. In post-Reformation Europe when multiple states and sects individually claim to embody the one true universal Church, a theology that should have led to peace turns into a source of civil war and transnational conflict. Political theology isolates the knot binding religious and secularizing impulses in early modern texts in order to confront the unexpected recurrence of the same conjuncture today.

Although the phrase enjoys a much longer lineage, in contemporary scholarship “political theology” is associated above all with the troubled legacy of the German jurist and sometime Nazi Carl Schmitt, whose short book, Political Theology: Four Chapters on the Concept of Sovereignty declares the homology between religious and political concepts in order to establish the exceptional relationship of the sovereign to a law whose normative legitimacy he is nonetheless dedicated to safeguard. For Schmitt, political theology involves a double movement. Secularized theologies of the state emerge as a solution to the problem of religious division in the writings of Bodin, Hobbes, and the Treaty of Westphalia. But Schmitt also underscores the inadequacy of this resolution, showing how early modern and modern jurisprudence reinforces division and conflict among states, both within Europe where conflict is provisionally bracketed and in the New World, which becomes a space of unregulated, wild violence. At first glance, the modern age appears to leave its theological past behind; sacred kingship and its attendant regalia no longer concern the liberal citizen. But upon closer inspection, the modern age redefines and rebinds politics and theology in an attempt to manage its deepest tendencies toward chaos and dissolution. For Schmitt, Hobbes resolves the crisis of political theology by ceding authority to the sovereign who has the capacity to constitute the public as a space free of religious division, while Spinoza founds community on the possibility of heresy and dissensus. Schmitt attempts to foreclose Spinoza’s account of political theology by emphasizing Hobbes. Contra Schmitt, the writers in this volume are eager to recapture the democratic promises of Spinoza borne by his iconoclastic re-reading of scripture. If, as Carlo Galli argues, political theology should be understood as an eruption, or as Jacques Lezra posits, political theology is an always incomplete confrontation between two modes, the political and the theological, then how might this moment be thought in the service of new forms of political community, social life, and artistic invention? A political-theological as well as a biopolitical dimension animates aspects of environmentalism, social media, and DIY labor and community formations, as well as efforts at reading, making, and performance that border on the exegetical in their search for something binding, real, or true.

We began with the proposition that political theology is not religion. Although political theology is sometimes described as a “turn to religion,” this is not exactly right: first, because we cannot go back to a religion of the past without devastating consequences, as the brutal delusions of fundamentalism reveal daily; and second, because even if we could time-travel, the religions of the past would fail to meet our expectations of coherence and community. In effect, we have never been religious. The essays in this volume demonstrate that accounting for political theology leads just as readily to a critique of the “religious turn” as it does to its validation. Yet the elusiveness of the religious object also helps us to distinguish political theology from cultural analysis. Cultural studies would take religion to be one element in a series of identifiers, putting religion in its place by turning it into another sign of otherness alongside race, class, and gender. Cultural critique would see religion as a form of mystification either supported or exposed by literary texts. For cultural studies, religion is a positive form of identity; for cultural critique, religion is a negative force of manipulation. Although political theology does not necessarily deny either of those positions, it stakes a third way that conceives of religions as composed of persistent sets of hermeneutic, juridical, and subjective processes that jump group lines and are generated from below as well as above. Of course, religions participate in culture, but what distinguishes religions from culture is their survival beyond the local habitations of custom, practice, and power. Political theology takes seriously the recurrence of formal patterns, exegetical habits, narrative types, and metaphysical questions (what Hannah Arendt, following Kant, called the “thought-things” of God, freedom, and immortality[i]) that continue to animate forms of thinking, social organization, and everyday life in modernity, and which had peculiar purchase in the Renaissance.

We are not claiming that religion is foreign to culture; rather, we are asserting that, because of its odd positioning in modernity, religion, like art, requires forms of analysis other than cultural ones if we are to grasp its uncanny ability to retain and transmit its urgencies. Both art and religion can, of course, be explored on purely contextual grounds, by purely contextualizing methods, but do those approaches end up grasping what is distinctive about these forms of human expression? Just as art solicits some kind of formal analysis, religion requires some kind of formal and phenomenological accounting in order to apprehend the successive claims for attention, acknowledgment, resistance, and reform by means of which religion keeps surviving its various, modern overcomings.

In the great poetic projects of Spenser and Milton, the lyric experiments of Donne and Marvell, and the plays of Shakespeare and his contemporaries, we see something called literature emerging against the backdrop of sacred texts. In one account of this transformation, literature founds secular culture. This account offers a narrative in which early modern literature creates a secular public, a narrative in which literature makes the break and is the break between the secular and the sacred. A counter narrative would posit that there was no break at all, that each of these great poets was a man of faith, and that the task of the historical critic is to reconstruct the horizon of belief that has become illegible to us today. Political theology remains discontent with both narratives, seeking instead moments of impasse and hence of possibility that elicited imaginative formulations with the power to reveal and constitute new norms, communities, and forms of life. Political theology recovers the specificity of literature from the potentially neutralizing force of culture by taking seriously Renaissance literature’s definitive disclosure of political making as what is at stake in key moments of revelation and scripture. In this volume, such moments include the signature of circumcision, the violence of sacrifice, the dream of a corpus mysticum, the challenge of neighbor love, the unions and disunions of marriage, the dialectic of idolatry and iconoclasm, and the inextricable bond between enlightenment and terror.