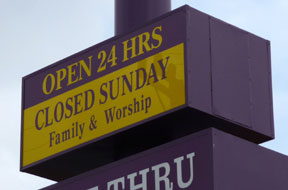 Recently I had the privilege of dining with several incoming college freshman as they arrived at Vanderbilt’s campus in the heart of the American South for the first time.  One of the students commented on how difficult it had been for him to buy dinner off campus the night before because it was a Sunday.  I smiled and said, “Blue laws.” While the other Southerners at the table seemed to immediately agree, those who had not previously encountered such restrictions (whether in the South or otherwise) seemed confused.  The conversation continued as we discussed restrictions both legal (the sale of alcohol) and individual (Sunday closures of Chick-Fil-A) that remain as what may be largely seen to be holdovers from a (imagined?) time when Sundays were held as “sacred” in America—whatever that meant.

Of course, the question of what is “sacred” becomes a difficult one to parse.  Is my Sunday somehow more or less holy if I am able to buy a chicken sandwich?  If I must plan ahead to purchase my alcohol on Saturday (or, if I live in Israel, on Friday as the case may be)?  On the other hand, what about the people whose occupation it is to provide their services?  Am I giving them a sabbath by not indulging in such luxuries as would require them to leave their families and places of worship in order to sell these goods?  Are they grateful for this rest, or would they prefer the added day to work and support their family?  If the store were open, would they have a choice as to whether or not to work?  What about their Jewish of Muslim counterparts—do the same places of employment that close for all or part of Sunday for Christian sabbath allow these faithful employees Saturdays or Fridays off for their respective sabbaths?  The questions and factors that go into them could go on indefinitely.

As we begin to delve deeper into the underlying economic, religious, and political factors that influence the existence and lack thereof of “Blue Laws” in various areas, we can begin to get a sense of the textures behind the disagreement between Jesus and the leader of the synagogue in the gospel lesson for this week.  Luke begins with a typical, respectable scene:

Then a woman who has been crippled approaches Jesus.  In another reflection, the presence of a woman and a woman who is understood to have been oppressed by a spirit in the vicinity of someone teaching in a synagogue could lead to its own set of questions.  But, for the present, focusing on the dynamic of what actions are appropriate on the Sabbath, this woman’s presence does not seem to be out of line.  Indeed, she does not even ask to be healed.  She is simply there—listening to Jesus speak.

However, when Jesus sees this woman, he seems to have compassion on her.  (Or maybe he sees an opportunity for a teachable moment).  In any case, he heals her.  As a father stoops down to help a fallen child up, or a farmer leads a thirsty ox to water, Jesus reacts with the visceral response of a caregiver, seeing one whom he is responsible for who is in need.

Interestingly, though, the synagogue leader does not critique Jesus.  Perhaps he doesn’t understand himself as having enough authority to critique this one who is teaching in his midst.  Perhaps he already understands what Jesus has declared from the start of his ministry in Luke, that Jesus has been sent from God to bring about healing and release and understands himself as a subordinate to that.  But, in any case, exerting control where he does have it, he addresses himself to his congregation—those who have come to hear and listen to this greater authority teach.

“The leader of the synagogue…kept saying to the crowd, ‘There are six days on which work ought to be done; come on those days and be cured, and not on the sabbath day.’” (Luke 13:14)

A good systems theorist today might see the beginnings of a sort of triangulation going on.  But Jesus, again fiercely protective, claims his own actions and does not let the crowds unnecessarily take the heat.

“You hypocrites!” [he addresses the leader and presumably those who are in agreement with him. ] “Does not each of you on the sabbath untie his ox or his donkey from the manger, and lead it away to give it water?” (Luke 13:15)

The Sabbath, Jesus tells us in Mark’s gospel, is made for man and not man for the Sabbath (Mark 2:27).  God’s time is a time that, no matter when it is observed (and, for Jesus and the synagogue leader, this would have been a Saturday) and no matter how it is observed in the particulars, it is always and only about life.

And so, this week, whether I am planning my own Sabbath around early shop closures, or praying for my brothers and sisters in Egypt and around the world who must plan their Sabbath observances (be they Christian, Muslim, Jewish, or any other faith) around violence that threatens their very lives, I give thanks that ours is a God who is fiercely protective.  I give thanks that ours is a God who is bigger than divisions between liberal and conservative, Muslim or Catholic, and who inspires people of good conscience to stand their ground and protect the sabbath observances of their brothers and sisters, even of different faiths.  And I pray that this same God will inspire change in our world so that the conversations are always about God’s people and their well-being, and not simply about the ‘rules’ and the way we wish things ought to be.

The Rev. Amy Lindeman Allen is an ordained minister in the Evangelical Lutheran Church in America and a fellow in theology and practice at Vanderbilt University in the area of New Testament and early Christianity. She and her family reside in Franklin, Tennessee where they attend the Lutheran Church of St. Andrew.

[This post is part of our series on the politics of scripture, which focuses on weekly preaching texts. We also welcome commentary on sacred, classic, and profane literature, film, and artistic expression. Submissions may be sent to 40bicycles@gmail.com.]