In a time of transition, Moses models what is needed: assurance that the foundational covenant will be preserved by those called from the midst of the people to listen to and speak for God.

In times of social upheaval or political transition, we often look to leaders for guidance. Frequently anxious, we want some assurance that this change will not precipitate crises, that we have what we need to weather the transition. We want to recount our history to know that we are resilient and able to adapt to changing circumstances. We want encouragement.

In Deuteronomy, Moses offers encouragement by retelling the story of the covenant as the people make their plans to enter the promised land. This event marks a generational shift in leadership and a significant transition. Moses reminds them of their history but also warns of the temptations that will present themselves in their encounters with other cultures. His words are a call to faithfulness and a reminder of their identity as the people of God. He reviews their principles, their practices—the hallmarks of their culture—and, above all else, calls them to “remain completely loyal to the Lord your God” (Deuteronomy 18:13). The unspoken question of the people is “How will we discern and hear the word of God for us?” In Deuteronomy 18:15–20, Moses answers them:

The Lord your God will raise up for you a prophet like me from among your own people; you shall heed such a prophet. This is what you requested of the Lord your God at Horeb on the day of the assembly when you said: ‘If I hear the voice of the Lord my God any more, or ever again see this great fire, I will die.’ Then the Lord replied to me: ‘They are right in what they have said. I will raise up for them a prophet like you from among their own people; I will put my words in the mouth of the prophet, who shall speak to them everything that I command. Anyone who does not heed the words that the prophet shall speak in my name, I myself will hold accountable. But any prophet who speaks in the name of other gods, or who presumes to speak in my name a word that I have not commanded the prophet to speak—that prophet shall die.’

Moses reminds the people that their collective identity is rooted in their covenant with God. He assures them that their success relies upon God who liberated them from slavery and made a covenant with them. This covenant will be remembered, revisited and renegotiated when broken. It will remain. It will not end. They have witnessed this when the people cast the golden calf and Moses had to advocate for them before God (Exodus 32 and 33). As the future unfolds, the word of God will continue to come embodied through prophets, carried by those chosen by God as heralds and emissaries. Prophets will be called by God as mediators between God and the people to keep the covenant that binds them intact.

Prophets are trustworthy leaders because they are not acting on their own accord or from their own ambition. They are not chosen by God from a particular family or tribe, not awarded this position through effort of any kind, not lauded or credentialed by those in power. From witnessing the fearsome God in fire and thunder (Exodus 19), this is not a job anyone is signing up for. Moses didn’t either. Once the call is issued, the prophet is compelled by allegiance to God alone, and the people are to heed such a prophet.

The relationship is unique between God and the prophet, and yet ordinary between the prophet and the people. Moses reminds them those called will come from “among your own people,” and will be like Moses—they will know the people, care for the people, speak directly to the people. Moses is the model for all the prophets who come after him, and their prophetic task is the same as his—to bring the people back again to obedience to God, the covenant.

The prophets are always remaking the covenant, returning to Sinai / Mount Horeb, bringing the people together in their circumstance to re-establish their relationship with God. The constancy and integrity of the prophets’ call inspires trust because through this the people know the steadfast love of God. The people know God’s power and God’s intention. God will not give up on God’s people, and this means life for them. Having come out of slavery in Egypt, where their lives were ruled by the capriciousness and greed of others, they are now given this opportunity to make their own way with God as their protector and guide.

This gives a nod to the humanity of the prophet, acknowledging that at times enthusiasm or passion may hold sway, but it doesn’t provide a failsafe answer to the concern. The people’s wellbeing is dependent upon the word of God, and we know that truth reveals itself over time, and that what seems untrue to one generation may be authenticated by the next. Time changes our perspective on even what has and hasn’t occurred and how it is to be valued. Discernment on the people’s part will be needed, but ultimately the responsibility will be with the prophets. They will be held accountable. God will not allow God’s people to be led astray.

The touchstone for the Hebrew people is the covenant which defines their relationship with God and each other. The Commandments put forth the principles forming the character of the culture, informing daily life. In any nation, there are foundational documents and an assumed common narrative that forms the identity of the people, to which they return again and again. It is like a well in the midst of the community, a shared resource, necessary for life. The community needs to be able to trust the water that comes from that well, that it will keep them healthy and alive, not just to survive but to thrive. Moses in this time of transition could direct the gaze of the people to the past as he pointed to the future. They trusted him and his authority, that his words conveyed the will of God for them. They learned to trust the prophets who came after him as they return to the well, the covenant, again and again.

To whom do we turn as a nation, as the pandemic continues, and as recent civil unrest reveals deep cultural divides? Who remains faithful in all integrity to that which binds us to each other and provides a shared national identity? Is there a common well from which we draw?  As prophets are called by God as mediators between God and the people to keep the covenant which binds them intact, so politicians are called by voters as mediators between the nation and themselves to keep our democracy intact. The oaths of office public servants take to uphold and defend the Constitution of the United States are to bind them to that document and the history that produced it, so that they might with integrity call the public to do the same.

Those who take on these positions are like the prophets “from among [our] own people,” to reflect who we are, our concerns and needs, and carry those into legislative conversations. This is what assures us that this “. . . government of the people, by the people, for the people,” as Abraham Lincoln said, “shall not perish from the Earth.” In recent years, it has become clear that we have not been calling politicians to serve us that reflect the actual demographics of “the people.” A racial and gender minority of white men have maintained their hold on power through voter suppression, intimidation, and the denial of equal personhood to others.

This is our legacy—again and again we have failed to return to our national covenant and remake it when it has been broken. The prophets, beginning with Moses himself, called the Hebrew people to do that. Our politicians have not. Basic to our democracy and what has led us to amend our constitution to welcome a broader citizenry is the statement we hold dear from the Declaration of Independence: “all men are created equal.” Although the slave-holding authors of that document did not pen these words as applicable to all humanity, our return to them has broadened our understanding and inclusion of all of our people—but not in practice.

We have not remade our covenant in terms of obedience to this principle of equality. Our history reveals that, while Reconstruction initially integrated governmental offices, backlash and Jim Crow laws put it to an end. Gains made by the Civil Rights Movement have been undermined by mass incarceration, enervation of the Voting Rights Act, and systemic racial inequities in policing and law enforcement. Over the past century, women’s suffrage has not yielded equal participation of women in public service or even representation equal to the percentage of the population. Other minority groups are similarly underrepresented.

When our politicians are prophetic, when they hear and respond to the call to revisit what binds us together as nation, they debate and seek to establish and maintain equality under the law, in wage earning, in health care, in education, and in governmental representation. When they “speak in the name of other gods”—moneyed special interests, lobbyists, big business, fear of violence, their own self-interest— they pursue reinstatement of red-lining, reduction of assistance for those in economic distress, disenfranchising voters, removal of safety and health regulations, and establishing policies on all fronts that further inequality, the exact opposite of our stated democratic ideals.

In a time of transition, Moses models what is needed: assurance that the foundational covenant will be preserved by those called from the midst of the people to listen to and speak for God. In this time of transition in the United States, may we hear above the fray, leaders from the midst of our people calling us to re-examine our history and establish in practice “liberty and justice for all.” 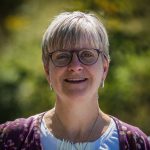 Debbie Eisenbise is the former Director of Intergenerational Ministries for the Church of the Brethren. She serves as an Instructor at the Brethren Academy for Ministerial Leadership, interim minister, spiritual director, end of life doula, and pastor at an online church: www.livingstreamcob.org.