As six emerging scholars met over summer 2021, the overarching theme of the workshop—the state of the field of political theology—presented both an opportunity for and obstacle to meaningful conversation.

The 2021 cohort of the Emerging Scholars in Political Theology program met for a week-long workshop in Philadelphia early this August. Led by Vincent Lloyd and Winnifred Sullivan and hosted by Making Worlds Bookstore and Social Center, the cohort reflected on the state of the field of political theology through group discussions of books, articles, and creative writing, in addition to conversations with other visiting and local scholars, a university press editor, and an independent publisher. Each workshop participant submitted a text and syllabus-in-progress for collective reflection and feedback over the course of the week.

The overarching theme of the workshop—the state of the field of political theology—presented both an opportunity for and obstacle to meaningful conversation within the cohort. The six participants brought a set of diverse yet interrelated research interests to the table: racial and religious imaginaries in the study of trauma; gender and sexuality in Christian theology; food sovereignty, land tenure, and Black liberation theology; anti-Black violence and lynching engaged through psychoanalysis and visual culture studies; ethnographic engagement with religion and sanctuary around the U.S.-Mexico border; and indigeneity and its relationship to Christian doctrine in modern political philosophy. While a shared appreciation for the nuanced relationship between politics and religion in public life brought these scholars into dialogue, efforts to define “political theology” and delineate the parameters of the field elicited more questions than answers.

This elusiveness may have played an important role in creating space for the transdisciplinary connections that developed during the workshop. The absence of a strictly defined selection of canonical literature or a perfectly overlapping group of interlocutors opened a kind of breathing room for flexible associations as participants invited one another into different intellectual worlds. An ambivalent approach toward the question of what “counts” as political theology allowed for the emergence of decentering and destabilizing discourses that explored areas of resonance between unlikely conversation partners – for example, a scholar teaching in a Black Studies department exchanging ideas with a scholar teaching in a Christian theology department. In this way, the group seemed to embody Roberto Sirvent’s call for “messy collaborations” across the field of political theology, engaging in practices of learning and disciplining while simultaneously committing to processes of “un-learning and un-disciplining.”

On the other hand, an unwillingness to establish hard-and-fast boundaries around the field also led to the predictable problem of trying to situate one’s work without the support of reliable guideposts. In the context of the workshop, one question that arose pertained to the ethics of ethnographic scholarship among people who identify their actions as explicitly apolitical or non-theological: What does it mean to name something as “political theology” on behalf of someone else? On a different, but related, theme, some members of the cohort contemplated the slipperiness of doing political theology without claiming the role of a theologian or maintaining a personal commitment to structures of religious meaning-making, prompting the question: What kind of work is considered theological enough? Naming these moments of tension and uncertainty served as their own kinds of indirect reflection on the study of political theology.

Amid these discussions, Joi Orr offered the analogy of a chess board as one approach for understanding the field. She suggested that naming a text or idea as “political theology” provides language with which to describe the metaphorical “board” and analyze the way the “pieces” move on it. In this formulation, the work of political theology is oriented toward tracking various forms of movement and encounter within a geographical, historical, or ideological landscape, cultivating certain kinds of imagination and innovation while limiting others. It is profoundly concerned with relationships of power across religious and political contexts, broadly conceived.

The focus on relationality manifested in multiple conversations throughout the week, as the cohort explored complex dis/connections between epistemic and moral discourses, land and liberation, Afropessimism and antisemitism, and the living and the dead, among other topics. These transdisciplinary entanglements brought projects of translation to the forefront of group discussions as participants interrogated the limits of communication not only between religious and political registers, but across fields pertaining to law, psychology, anthropology, and others. Because the terms, frameworks, and methods characterizing one discipline could never fully “map onto” another, the work of translation became less about locating parallel terminologies and more about establishing a multidimensional web of interpretation for key concepts that recurringly appeared in the group’s conversations.

Identifying and exploring relationships also offered clarity around some of the stakes involved in doing political theology. In writing and syllabi workshops, participants pushed one another to explicitly state the implications of the relationships they examined in their research and to situate the ideas under analysis in relationship with—and accountable to—realities not contained within the academy. Each scholar grappled in some way with narratives of harm, trauma, or suffering in their work; these discourses steered group discussions toward questions of care, re-membering, and theodicy. They also introduced a topic which remained a subject of deliberation throughout the week: In the process of studying systems of harm and domination, when and how might those doing the work of political theology begin the constructive project of imagining otherwise?

This theme of imagining otherwise emerged during the cohort’s first meeting while discussing Amira Mittermaier’s book, Giving to God. A question posed by Winnifred Sullivan about moving from critical to constructive scholarship ushered in a series of new questions relating to the interplay between hope and optimism, critique and prophecy, storytelling, methodology, and resistance. Many of these topics haunted the week’s subsequent conversations through the final day of the workshop as participants collectively contemplated various imaginings of resistance in short stories written by ZZ Packer and Octavia Butler. A shared frustration over the inescapability of flawed examples and incomplete answers in a field concerned with systems of social in/justice led to a deeper appreciation for the work of engaging multiple stories while writing resistance and imagining otherwise.

This overview of the Emerging Scholars workshop would be incomplete without mention of the persistent presence of COVID-19. As the Delta variant gained prominence in hospitals and headlines around the globe, the group relied on local relationships and resources for safe meeting spaces and embraced the outdoors during hikes, tours, meals, and Shakespeare in the Park. While this gathering looked different from what it might have been in numerous tangible ways, it also pushed many of the week’s themes into a harsher focus, centering the topics of crisis, resistance, and relationality through the lens of political theology.

The cohort will meet again this winter (virtually) and once more in the summer of 2022. 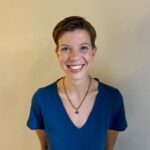 Laura Simpson is a Ph.D. student at Villanova University. She studies Christian social ethics with a focus on theologies of punishment in the U.S. prison system.