The NRA’s recent announcement of a grand master plan to end gun violence stunned me.

Perhaps it shouldn’t have. I worked as a lobbyist at one point in my life, and I know all about positioning the argument so that it is conducted in the framework that I or my client defines.

In case you missed it, here’s the gist: arm school staffers and lock doors.

Words about limiting access to guns or to high-capacity magazines?

None. Of course not. The NRA receives fully half of its funding from gun manufacturers, and gun makers such as Beretta and Smith and Wesson give generously to its lobbying arm, NRA-ILA. It would not be in the interest of gun manufacturers to have its prime lobbying group suggest that they sell less product.  Position the argument in the framework the client desires.

Let’s just put aside the business about the locked doors. Most schools already do that, as did Sandy Hook Elementary School. Any weapon with even moderate firepower can solve the problem of a locked door in seconds.

But then we get to the issue of arming staff in the schools (most of whom do not want to be armed). A schoolteacher whom I know and respect told me “If I wanted to be a law enforcement offer I would not have gone into education.” Asking overworked, underpaid staff (at whatever level) to turn into Rambos to protect their charges is a recipe for disaster.

I recall Wayne LaPierre’s remark, “The only thing that stops a bad guy with a gun is a good guy with a gun.” Then I think of the Texas DA – a gentleman who was former military, who was well-trained in the use of firearms, and who had warned any miscreants that he had the skills to protect himself and was armed at all times – who was shot dead at his own doorway, his wife beside him. Clearly, simply being a good guy with a gun – and DA McLelland was a good guy with a gun – did not solve the problem. First responders who were asked about how a single armed guard or police officer serving as a Resource Officer in a school could fend off a determined killer with the kinds of weapons we saw used in Newtown simply said that there was no way an officer could get from one side of the building to another and shoot to disarm, disable or kill an assailant fast enough to prevent the bloodshed.

The NRA would have much more credibility if it were willing to support reasonable gun reform, such as no more high capacity magazines and no more assault weapons. Background checks? How in heaven’s name can they argue against universal background checks, when we have to go through all sorts of clearance to get a driver’s license?

A friend raised the point that driver’s licenses are a privilege but gun ownership is a constitutionally guaranteed right.  This is true, of course, but it bears a bit more examination. First, let’s look at the actual language of the Second Amendment.

“A well-regulated militia being necessary to the security of a free state, the right of the people to keep and bear arms shall not be infringed.”

I note that this is the only one of the amendments in the Bill of Rights that specifically states a purpose: in this case, to protect the security of a free state as part of a well-regulated militia. We now have both state militia under the aegis of the Federal government (the National Guard) as well as Federal military. So I could start by making the case the individuals’ rights to own firearms is no longer necessary, given the presence of a military force to protect the state’s freedom, but I’m going to pass on that argument.

Instead, let’s look at the crux of the thing: with rights come responsibilities.

Just as states and to some extent the Federal government attach responsibilities to some rights when it deems it necessary, and just as laws are passed to impose those responsibilities and prescribe penalties if the responsibilities are not met, we now face a situation where there must be some responsibilities attached to the right of gun ownership. This is not a new concept: we already have some background check laws in place. This is similar to the notion that although we are guaranteed free speech by the first amendment right of free speech. This is one of the most powerful and deeply cherished rights. We allow even speech that is offensive – witness neo-Nazis marching in Skokie – but even with this right, there is recognition of attendant responsibilities as embodied in law; we cannot libel or slander someone, for example.

It is a fact that the right to bear arms is enshrined in the constitution. It is described as a right, but with that right come responsibilities. These responsibilities apply to the gun owner, to the gun seller, to the gun manufacturer. There is a purpose for this: protection from the potential for harm. We similarly legislate to protect people from harm caused by other goods, products, services and actions. Thus, my support for reasonable gun control (limited magazine capacity, universal background checks, ban on assault weapons) is not a mere liberal attack on a constitutionally guaranteed right, it is simply an imposition of responsibility upon those who own, make or sell guns, for the common weal.

For me, the argument that a constitutional right trumps our responsibility to protect those around us is a specious one. I adhere to a higher standard: “Love God, and love your neighbor as yourself.”

That’s not a constitutionally enshrined right. That’s not a legally protected privilege. That’s a gift, and it is the only one that really matters. And no lobbying groups paid for it. 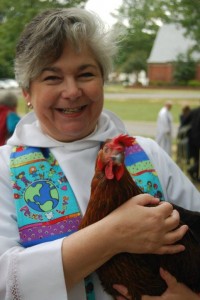 About the Reverend Mary Brennan Thorpe ~

My circuitous journey to ordained ministry came after careers in public policy (served as senior staff to a Congressional Committee and as a senior executive in the Executive Branch and then was – gasp! – a lobbyist), was an entrepreneur in high-technology, and was – many years ago – a music teacher. I am Rector of The Church of the Epiphany (Episcopal) in Henrico, Virginia; I also serve as Chair of the Diocese of Virginia’s Committee on the Diaconate and as Dean of our corner of the diocese.  I hold degrees in music from New Jersey City University and the University of Hartford, post grad studies in business at Stanford University through the American Electronics Association. I’m currently engaged in doctoral studies in Church and Ministry at Columbia Theological Seminary, intent on proving that you can teach old dogs new tricks. I am married to Doug and am mother to Matt, Bryce, Chris, Sam and Allie and GrandMary to Katie, Bryce C, Blake and Ben.

I blog at Rev Mibi, where you’ll find sermons and assorted commentaries on life, work, and the world.

One thought on “Rights and Responsibilities — Mary Brennan Thorpe”