I’ve been thinking a lot lately about anti-racist work in the church and the difficulty of doing that work in settings that are mostly white. It seems like a never-ending project just to begin to raise awareness of the privilege of whiteness, much less really dig into the ways in which systemic racism coopts our inattention and carelessness. Sometimes it requires a delicate touch to discuss racism and privilege in our churches, but I usually show up with a sledgehammer.

This week a young black man named Tre Lane was murdered in Trenton, NJ. He is the 15th person to be murdered this year in Trenton. I work with youth in and around Trenton these days, and this 19 year old man was only a few years older than most of my youth. He was only six years older than my own son. My heart aches for this baby’s parents and loved ones. My sledgehammer words are of little use, I fear.

As I was thinking through my place as a white woman addressing violence in the city of Trenton, a sermon I preached came to mind that suggested a starting posture.

Two years ago, on August 28, 2010, Glenn Beck held a rally on the steps of the Lincoln Memorial. He said that it was time for white folks to reclaim the civil rights movement for ourselves. It was no secret that I was not a Glenn Beck fan, but I think I underestimated how many people in my congregation and in my life enjoyed a little Glenn Beck as a nightcap. I underestimated how many people in my life believe that white folks are losing their civil rights, even as people of color continue to lose their lives and liberty at alarming rates.

Glenn Beck’s rally was held on August 28, the anniversary of Dr. Martin Luther King’s “I Have a Dream” speech, given on the very same Lincoln Memorial steps in 1963. And if that wasn’t tasteless enough, Dr. King’s address was given on the 8th anniversary of 14 year old Emmett Till’s brutal death at the hands of white men on August 28, 1955. On those same Lincoln Memorial steps, Marian Anderson, a black woman singer, performed for 75,000 on Easter Sunday in 1939—she sang on those steps because she had been refused permission to sing in Constitution Hall by the (white) Daughters of the American Revolution.

That time, August 28, and that place, the steps of Lincoln Memorial, are steeped with the history of black folk seeking wholeness, justice, and peace in the midst of a racist, oppressive, supremacist society. From those steps Dr. King issued an invitation to white folks to join in that movement. And on August 28, 2010, Glenn Beck sat us white people down rudely and squarely at the head of the table and asked for seconds. It was an ugly moment, barely noticed by the white folks around me.

I preached about all that on Sunday, August 29, 2010. I preached about having respect at table—about settling down at the foot of the table when one is a guest. I said we white folk had been graciously invited to the table and that we kept settling in as if we owned the place. I suggested to my congregation that we needed to have a bit more care.

This didn’t…go well. The congregation sat me down and had hard words about my social justice bent. They asked for biblically based sermons. They said no more Dr. King. I looked ahead in the lectionary, only to find Lazarus at the gates as the next assigned passage. I didn’t know how to write a biblically based sermon that wasn’t about social justice. So I stopped writing sermons for a while.

I recycled an old sermon. I called in the Gideons who gladly preached in my place. The third week I replaced the sermon with 10 minutes of silence. I received an email that week from a member: “Dear Katie, I really enjoyed your sermon this week.” By week four I found my voice again. I put away my sledgehammer a while. I wondered why I bothered preaching that sermon when I knew it would simply anger my congregation. Pointed sermon delivered: 1. Hearts and minds changed: 0.

But I think that in the writing and preaching of that sermon it was actually my own heart and mind that was changed. Two years ago I would have charged into the middle of the grief and mourning for Tre Lane without enough care for those who know their own community best. I find myself now longing to find a spot at the edge of the crowd—some place in this city of Trenton where I can slip in and be useful if needed and quiet if not.

I’m not sure of the use of my sledgehammer words and eager hands. I don’t know quite the words to share all this with the youth I work with and their families. But I think I’ll begin with simply saying Tre Lane was close to us. We walk and move and breathe in some of the same places he did. I will invite them to mourn with me at the edge of the crowd, knowing that he could have been one of my own, but also that he wasn’t and that I am a guest. 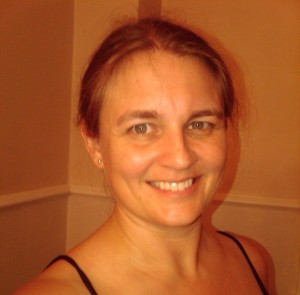 Rev. Katie Mulligan is a graduate of Princeton Theological Seminary and youth pastor for four churches in and around Trenton, NJ (Ewing, Covenant, West Trenton and Lawrence Road Presbyterian Churches). She is also a chaplain at Rider University. Katie is the parent of two boys and four cats, and blogs at Inside Outed.