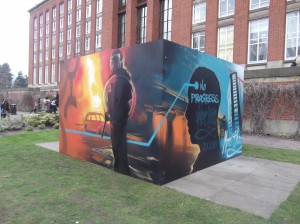 Over the last few years I’ve noticed several key strands emerging in relation to thinking about the nature and role of ‘Church’ in the 21st century….At one end of the spectrum we find attempts to re-assert a ‘church-centric’ postmodern Christian vision which arguably eschews serious engagement with the social sciences and is wary of faith groups partnering with government. We could think of this as an ecclesiology of/for the ‘big society’, a new ‘Christendom’ or what has become known as ‘radical orthodoxy’ (seen for example in the work of John Millbank). At a grassroots level it’s possible to see some linkage between these ideas and what has become known as ‘emergent church’. At the other end of the same spectrum we see the emergence of an alternative ‘post-secular’ theological narrative within which ‘Church’ finds its space as part of a network (or perhaps rhizome) of narratives of meaning in a society that has become increasingly suspicious of organized religion of any sort. We might call this ‘third space’ ecclesiology (seen perhaps in the work of Chris Baker) – more ‘Occupy’ than ‘big society’. As the place of faith in the public sphere has once again become a central political question the Christian community in the UK finds itself at a watershed moment. These two strands of political theology continue to stimulate challenging discussions about the future for faith in the 21st century. And yet both approaches leave me feeling uneasy for three reasons…

The recent blogs relating to Radical Orthodoxy and its differences from the work of the William Temple Foundation appear to have ground to a halt. This is a pity as they were just about to get beyond the realms of intellectual points scoring and into some serious debate. An angle that had yet to be pursued was that of the former’s advocacy of localism and how that might be operationalised in the UK context where the current administration is keen to promote this as a policy initiative. As someone who through parochial ministry, has been eager to operate at a local level and been involved in various community work projects, I feel that I have a powerful stake in this debate (examples of this are to be found in my Local Theology: Church and Community in Dialogue, 1994, and again in Blurred Encounters: A Reasoned Practice of Faith, 2005). So when I read that there should be a renewed interest in and support for church-based projects that are indeed locally based and developed, I would have to say that I am broadly in agreement. My problem, however, is that it is difficult to see how this can be operationalised given the current pressure upon local voluntary resources, and that it fails to take into account the reality of many local issues.