The nearness of God inspires communities to work for justice, for the Son of Man as a co-pilgrim participates in the struggles of the creation.

25‘There will be signs in the sun, the moon, and the stars, and on the earth distress among nations confused by the roaring of the sea and the waves. 26People will faint from fear and foreboding of what is coming upon the world, for the powers of the heavens will be shaken. 27Then they will see “the Son of Man coming in a cloud” with power and great glory. 28Now when these things begin to take place, stand up and raise your heads, because your redemption is drawing near.’

29Then he told them a parable: ‘Look at the fig tree and all the trees;30as soon as they sprout leaves you can see for yourselves and know that summer is already near. 31So also, when you see these things taking place, you know that the kingdom of God is near. 32Truly I tell you, this generation will not pass away until all things have taken place. 33Heaven and earth will pass away, but my words will not pass away.

34‘Be on guard so that your hearts are not weighed down with dissipation and drunkenness and the worries of this life, and that day does not catch you unexpectedly, 35like a trap. For it will come upon all who live on the face of the whole earth. 36Be alert at all times, praying that you may have the strength to escape all these things that will take place, and to stand before the Son of Man.’

If Luke the gospel writer lived today, in our fragile world, he would call and discern the signs of our times. Looking at conflict in Palestine and elsewhere, he might speak of ‘distress among nations,’ as recorded in Luke 21:25. Looking at discussions on climate change by global leaders, where the ‘future of the planet’ is the key issue on the table, he might speak once more of people ‘confused by the roaring of the sea and the waves.’

He would further call the long unsafe, undocumented travels of refugees, as they flee from war and situations of violence in their home countries, ‘people [fainting] from fear’. Such fear is also due to the rising intolerance towards minorities of many governments and other indigenous communities.

In such and similar other contexts, Luke proposes that “Then they will see ‘the Son of Man coming in a cloud’ with power and great glory” (verse 27). Such a sign of Son of Man coming is a sign of hope for communities who are in deep distress and suffering. Advent, therefore, as a ‘time of waiting’ is an affirmation of the ‘nearness of God’ for our time.

The existing signs of our times in the world are not just ‘end of our times’; rather, they are ‘times at our end’, and ‘times on our end,’ which need a recognition of the coming of Son of Man into our times. Advent is an adventure: we must rediscover it, recapture it, and reaffirm it.

“Son of Man coming in the cloud” is a landing note for faith communities today. The recognition of this Christological title, which was picked from the apocryphal literature of Daniel, occurs in seeing God in Christ amidst the dirt and dust of our contexts. There is a nearness of God’s presence among us and amidst us, manifest when God in Christ pitched his tent among the materiality of our contexts.

Advent unsettles our notions of a God of distant transcendence, high above the clouds, disclosing to it a God of immanence, who as ‘Son of Man coming in a cloud,’ has come near to the creation and its creatures. The distance between God and creation is reduced in this growing ‘nearness,’ as God’s velocity of coming down to earth is accelerated, with the brewing signs of our times today. This serves as a sign of hope for communities longing and waiting for transformation.

With the coming of Son of Man, Luke proposes that ‘redemption is near,’ for God in Christ has redeemed the creation from its traps and chains. However, one has to recognise that ‘redemption’ is a market term, which means a ‘repurchase.’ Our context today demands us to untangle this soteriological metaphor, which has been subsumed, distorted, and trivialized by the language of the market and globalisation: customers ‘redeem’ their reward points in supermarkets.

A subversive reading of ‘redemption’ needs to redeem our rhetoric of faith and transform it into praxis. For the Son of Man’s presence among and in our contexts is to redeem his transcendence and turn it into immanence. The redemption of justice from the bonds of injustice is a much-sought sign of hope for our times.

Jesus in Luke’s gospel explains his coming with a fig tree: when the leaves sprout it is a sign of coming summer. Likewise with these signs of our times and the signs of hope sprouting; the kingdom of God is at hand and is nearing.

It is here, in this space, that the Son of Man becomes a co-subject along with the creation in that democracy of God’s reign, where he partakes and participates in that space. Some may question, having seen so many dysfunctional democratic countries, whether democracy is a successful form of governance that can be construed as a form of God’s reign. I would counter that democracy has not been fully realized in such countries, people’s collective participation has not yet been realized.

However, in the reign of God, with the Son of Man as a subject, God’s reign will be a fully realized one, where creatures in the creation will define, describe, and decide the reign. God’s reign is a space that will emerge from below, amidst our contexts and communities. It is a reign that contests all forms of autocracy, authoritarianism, colonialism, dictatorship, and any other such oppressive form. Advent therefore is an affirmation of the nearness of God’s reign, where the Son of Man decides along with his creation the form of rule.

The relevance of Advent today is to invoke the nearness of God’s presence, redemption, and reign within our contexts, for the Son of Man has already come and pitched his tent. Reconciliation and reparation become key in striving for justice—whether in Palestine, climate talks, or anywhere else—for human greed has taken over the earth for all these years.

The nearness of God inspires communities to work for justice, for the Son of Man as a co-pilgrim participates in the struggles of the creation, striving for its liberation. Advent is adventurous: get into it, work for justice, and become channels of hope, for you are the hope that the world is in need of. 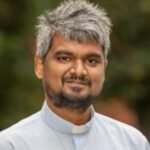