Alas for you who desire the day of the LORD! Why do you want the day of the LORD? It is darkness, not light; as if someone fled from a lion, and was met by a bear; or went into the house and rested a hand against the wall, and was bitten by a snake. Is not the day of the LORD darkness, not light, and gloom with no brightness in it? I hate, I despise your festivals, and I take no delight in your solemn assemblies. Even though you offer me your burnt offerings and grain offerings, I will not accept them; and the offerings of well-being of your fatted animals I will not look upon. Take away from me the noise of your songs; I will not listen to the melody of your harps. But let justice roll down like waters, and righteousness like an everflowing stream.

Recounting some of the atrocities of the past four years including the Muslim travel bans; ICE’s separation of children from parents and subsequent (and continued) detention of these children and families in cages; the intentional dissemination of speculation and falsities by the highest officials; the over 228,000 deaths from COVID 19 in the United States; and so many other obscene injustices—all makes one ask:

What better time than now for a day of the LORD?

On the eve of a major election day in the United States perhaps now is the time to ask for tomorrow to be a day of the LORD—a day when God intervenes in the world. In the lectionary text for this week the Israelites were desiring such a day themselves but were met with a challenging message by the prophet Amos.

Gregory Mobley in his introduction to the Book of Amos (New Oxford Annotated Bible, 1300) writes: “Against the background of Israelite tradition about ‘the day of the LORD,’ occasions celebrated from the past and eagerly anticipated in the future when the LORD dramatically intervenes in human affairs, Amos announced that such a day was imminent. This time, however, the fortified palaces and temples of Israel would be leveled along with those of Israel’s rival nations (1.3–2.3) when God executed the divine version of ‘justice and righteousness.’” The divine justice the people of Israel were wanting was for their adversaries and oppressors to be held in account by God but Amos’ message proclaims that all will be held in account—both the enemies of Israel and the Israelites themselves. The ones asking for a day of the LORD were not exempt from being held accountable for their own actions.

Amos pushes back on the zealous cry for the LORD to intervene, saying in verse 18: “Why do you want the day of the LORD? It is darkness, not light.” A day when God “dramatically intervenes in human affairs” is not necessarily a hopeful day. While the eve of election day is an occasion to eagerly await the intervention of God, the book of Amos warns us that those calling for justice will also be called into account. In short, calling for tomorrow to be a day of the LORD is the invocation of an actual “justice for all,” which calls to account conservatives and liberals alike.

The request for tomorrow to be a day of the LORD is not a request for the outrage of 2016 to be made right—for one party to get back at another party. If tomorrow is viewed as an opportunity calling for the day of the LORD in the form of the national election the call is one of justice without exception. A call for accountability that reaches the full spectrum of political affiliation. This cry is a call of justice for all.

Finally, it is important to note that underlying the cry for justice and mercy is an embrace of hopelessness as Miguel A. De La Torre (140) writes in his book Embracing Hopelessness: “It is not hope that propels people to the desert where more often than not death awaits; it is desperation. How many deserts would you cross to feed your children regardless of the risks involved? Hopelessness is an act of courage to embrace reality and to act even when the odds are in favor of defeat. Only at this critical junction of desperation, rooted in the now, is there a possibility for revolutionary change whose consequences might impact the future, or make the future worse as newer forms of oppression manifest themselves. But because we cannot discern the future with any accuracy, and because the future is not determined, we can only and boldly engage in liberative praxis within the now—and hope for the best.”

There are many worries and anxieties swirling tonight. What tomorrow, this week, this month, or January will look like is unknown. De La Torre’s embrace of hopelessness might be taken as a call for today as “an act of courage to embrace reality and to act even when the odds are in favor of defeat” as tomorrow’s outcome cannot be discerned.

Today on the eve of the national election may we be reminded of the dignity of human persons, embracing the gravity of reality, hoping for the best, pressing on no matter the outcome and may “…justice roll down like waters, and righteousness like an everflowing stream” (Amos 5:24).

May today be the eve of justice and tonight the cry be one of Mercy. 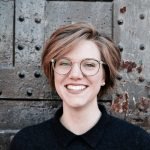 Heather J. Ketchum is pursuing a Ph.D. in Philosophy and Theology at Princeton Theological Seminary and serves as the Assistant Minister of Madison Avenue Baptist Church in Manhattan.

2 thoughts on “The Eve of Justice & A Cry for Mercy”