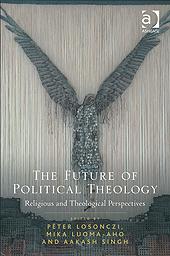 Our new book, The Future of Political Theology: Religious and Theological Perspectives (Ashgate, 2012), is a collaborative work between several of the members of the International Research Network on Religion and Democracy (IRNRD), which also closely cooperates with Political Theology. In a certain sense, the volume constitutes a kind of sequel to our book, From Political Theory to Political Theology (Continuum, 2010), given not merely the editorial continuity and reappearance of some contributors, but more substantively, insofar as we now — consequent to the earlier work — all take it as a given that the fundamental question of sovereignty cannot and will not be contained within the secular parameters of political theory, as assumed in and throughout modernity, and that therefore we are forced to query, as William Desmond does in Chapter 7 of the new book, what comes after modernity? (His chapter is entitled, “Neither Cosmopolis nor Ghetto: Religion and the Intimate Universal”.) I cannot speak for the other editors on this point, but my attitude on our prioritization of the future was also shaped by an intuition that scholarship on the past of political theology was largely a historical enterprise, and writing on the present (or presence) of political theology takes shape largely as sociological (or philosophical), while sustained reflection on the future of political theology would in some manner itself be political — this thought is admittedly difficult to articulate. Perhaps the better way would be to repeat what Graham Ward writes in his brilliant Foreword to the book: “I take ‘future’ then in The Future of Political Theology not just to refer to a time that is ahead of our own. The essays in this collection are not trying to forecast future world orders; they are engaged with this world, today’s world. But their engagements are both illustrative of engagements that the future will see develop and also engagements with what matters now; matters that, in being treated now, will impact the fashioning of our future.”

In another sense, however, the new book is discontinuous with the earlier one, in that it moves decisively away from the assumed academic primacy of political theory and political philosophy over religious and theological interventions in the field of political theology. This approach was urged by co-editor Peter Losonczi, although I — as a political philosopher — was sceptical at first. That Peter had been right became apparent to me as soon as I read the deeply innovative and provacative contributions of theologian Lieven Boeve (Chapter 4, “The Interruption of Political Theology”) and of Catherine Pickstock of the Radical Orthodoxy movement (Chapter 5, “Is Orthodoxy Radical?”). I find this simultaneous continuity and discontinuity particularly fascinating, and will have to think it through further as co-editor Mika Luoma-aho, Peter, and I begin work on our next volume on political theology, which is presently in its early stages.