The main problem is, we the people have given and continue to give it to them. Notice in the text that it is not Aaron who first announces that the calf is the god that delivered Israel from Egypt. It is the people themselves who identify this false connection, just as we ourselves are complicit in this perverse deification of injustice. 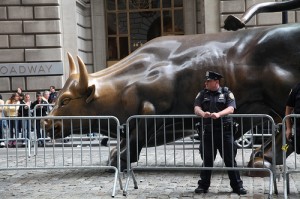 This article is part of the series, the Politics of Scripture. While the focus of the series is on weekly preaching texts, we welcome commentary on sacred, classic, and profane literature, film, and artistic expression. Submissions may be sent to david.true@wilson.edu.

Exodus 32:2-6
2Aaron said to them, “Take off the gold rings that are on the ears of your wives, your sons, and your daughters, and bring them to me.” 3So all the people took off the gold rings from their ears, and brought them to Aaron. 4He took the gold from them, formed it in a mold, and cast an image of a calf; and they said, “These are your gods, O Israel, who brought you up out of the land of Egypt!” 5When Aaron saw this, he built an altar before it; and Aaron made proclamation and said, “Tomorrow shall be a festival to the LORD.” 6They rose early the next day, and offered burnt offerings and brought sacrifices of well-being; and the people sat down to eat and drink, and rose up to revel.

Zucotti Park
The protests beginning in Zucotti Park on September 17 have instigated similar protests across the nation and around the globe.  It’s not exactly clear what the Wall Street protesters are demanding. However, the congealing of this nascent movement is more about belonging and identity than it is a list of hastily devised and vague remonstrations.  “We are the 99!” shout the participants, who in circumscribing their own identity simultaneously excoriate the richest one percent of American society and the unjust social policies and laws that maintain this gross discrepancy.  The Occupy Wall Street movement understands that something is amiss.

Corporations have risen up to play, and the party has gone on for far too long.  The gold that they have extracted from the arms, ears, and necks of American citizens is the naive faith in our economic system to which we blithely contributed. Although the rich continue their meteoric ascent into increasingly more stratospheric dimensions of economic prosperity, poverty still insidiously strangles the lives, opportunities, and well-being of millions. Still, the rich rejoice in declaring that the tax breaks that they are afforded make job creation for the other 99 percent possible, a false claim that has been disseminated since the Reagan era, and it’s one that continues to accrue political support.  These corporations point to the golden calf that they created—an idol as sinister and menacing as any that has ever existed—and they demand allegiance and obeisance to unfettered capitalism.

The main problem is, we the people have given and continue to give it to them. Notice in the text that it is not Aaron who first announces that the calf is the god that delivered Israel from Egypt.  It is the people themselves who identify this false connection, just as we ourselves are complicit in this perverse deification of injustice.

The party thrown in honor of the golden calf lionizes the rich while denigrating the poor.  It is a party to which all have been invited, including Democrats and Republicans, and the dance floor is crowded with bipartisan effusion.  The idol of unregulated capitalism has seduced leaders on both sides of the aisle, and the corporate tax breaks and deregulation that have made economic disparity possible were enacted by mutual participation in the legislative process.

Against the revelry that approves bank bailouts and tax subsidies for billion dollar companies, the masses are denouncing injustice with prophetic vigor. The Wall Street protests are occurring because there is a prophetic remnant who refused to be herded into unwavering support for an economic system that ultimately favors the most economically prolific and tramples on the poorer classes.  There may be no central manifesto listing their demands and tenets, but there is a sense of populist belonging that cries out for implementation of justice.  The remnant sees the social sin that paralyzes nations and brings these countries to the edge of financial collapse, and they say, “Enough.”  The protesters remind us that if our self-designation as a God-fearing nation is to be true, then the idol must be destroyed.  Resources must be distributed more equitably and legislation should not favor the billion dollar corporation with a lower tax rate than the minimum wage earner.  Perhaps little or no change will result from these protests.  Maybe they will be forgotten soon after the demonstrations dissipate.  Regardless of their practical efficacy, the Wall Street protests remind us that idolatry is amongst us, and the idol must be cast down.

Aaron Howard is a second year PhD candidate in Ethics and Society at Vanderbilt University. He is an ordained elder in the Church of God in Christ and has been happily married to his wife Mimi for 12 years. He has two children, a son Yosef, and a daughter named Blaine.