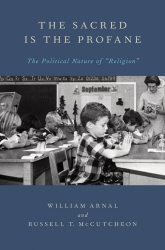 Although I don’t wish to speak for my co-author (though I did pass a draft of this post by him before sending it off to the site), I think it safe to say that our concern in the essays we collected in The Sacred is the Profane is with a series of ordinary strategies used to create a sense of group identity over time—whether that group be scholars themselves or the wider social groups that their labors help to make possible (e.g., the nation-state). For if, as I think to be the case, the use of the category “religion,” and its attendant concepts (e.g., sacred, experience, belief, origins, faith, etc.), provides one site where a sense of shared identity is continually re-made, then it makes sense to ask about the role played by the person who devotes his or her life to its study. That is, those who, as part of their professional life, use and teach the use of this taxon to name and document distinguishable aspects of human society ought to attract our attention if we’re trying to figure out how it is that individuals maintain a sense of homogenous membership in groups. So my recurring preoccupation with examining the routine practices of exemplary scholars of religion therefore strikes me not simply as a sensible but also a necessary focus.

With these routine practices in mind, I think of a quotation from On Television, by the late French social theorist, Pierre Bourdieu, that I’ve used as the epigraph for a previous collection of essays and which, for a time, Bill and I were considering using again in The Sacred is the Profane:

There is nothing more difficult to convey than reality in all its ordinariness.  Flaubert was fond of saying that it takes a lot of hard work to portray mediocrity.  Sociologists run into this problem all the time: How can we make the ordinary extraordinary and evoke ordinariness in such a way that people will see just how extraordinary it is?

Although I previously used this quotation in my own introductory book, Studying Religion, all the while I suspected that to really do justice to Bourdieu’s important insight, one would have to do more than just drop this quotation into an essay.  Instead, it seemed clear to me that such an insight into the ordinariness of human behavior—including the act of naming something as religious, as true—ought to be the engine that drove a study of some of the sites where the ordinary is dressed up as extraordinary, where the profane was sacralized, all in the service of helping regular people to reproduce a sense of themselves as members of coherent yet unique groups—groups that, despite appearing to them as timeless and homogenous, nonetheless have a history—a beginning and, like us all, an end. Well, to be honest, they likely have many histories—too many histories, in fact, so the question is which will become the history? It is my hope that the book Bill and I produced, taking some important cues from the work of people like Smith and Lincoln, and working against the grain of the still influential work of Eliade—who was their colleague (in the case of Smith) and teacher (in the case of Lincoln)—exhibits some of what can be gained by no longer seeing the sacred and the profane as two separate things but, instead, seeing this binary as but one of the many tools used to set one particular mundane situation apart from its many competitors, as something special when compared to the other moments vying for our attention, our resources, and our energies.

As such, although our book’s title carries a deferential nod to Eliade’s influential book—The Sacred and the Profane: On the Nature of Religion—hopefully our switch from the conjunctive “and” to the identifier “is,” the insertion of the word “political,” and the quotation marks around the word religion in the subtitle, signifies the distance our field has come over the past fifty years. For we are now able to redescribe so-called sacrality as but one more process by which authority and legitimacy are bestowed on otherwise mundane moments and situations, all vying for our attention. (I could say much the same for the advantages gained by calling but one form of rhetoric or propaganda “theology,” but I’ll leave that for the time being…) In fact, it is a distance marked by the motto of my own departmental home at the University of Alabama—“Studying Religion in Culture”—in which the preposition “in” is italicized. We do this to draw attention to the fact that the more common version of this popular phrase—“Religion and Culture”—employs a conjunction and, along with it, a series of often undisclosed assumptions that we hope our students will learn to recognize on their way to becoming scholars. Associated with the work of such influential scholars as the German sociologist of religion, Max Weber (1864-1920), and the Protestant theologian, Paul Tillich (1886-1965), the phrase “religion and culture” is today widely used (confirmed by a quick Google search for the phrase) to name a field that studies the intersection of these two otherwise distinct domains. That is to say, the areas known as religion, on the one hand, and culture, on the other, are assumed to be separate spheres that may or may not interact with each other, that periodically bump and grind—this very site’s self description sums this position up nicely: “Political Theology is devoted to studying the intersection between religion, politics and culture.” The field known as “religion and culture” therefore names the intellectual pursuit of studying their periodic intersections and influences upon one another, and the supposedly syncretistic offspring they sometimes produce.

Basic to this way of approaching the field is the widely shared assumption that the area of human practice known as religion is somehow removed or set apart from those historical and social influences that commonly go by the name of culture (which includes such things as language, art, types of social organization, and social custom). Upon further examining this assumption it becomes evident that an even more basic assumption is up and running, concerning the popular belief that the area we identify as religion (sometimes called “organized religion”) is in fact the public, and therefore observable, expression of what is believed to be a prior, inner experience, feeling, faith, or sentiment that defies adequate expression (William James is but one of the vanguards of this still up-and-running tradition, Wilfred Cantwell Smith another, along with every person who today says they are spiritual and not religious). The term “religion,” then, is thought by many to name the public manifestations (in texts, rituals, symbols, institutions, etc.) of an otherwise inner, personal essence or experience—think of Friedrich Schleiermacher’s strategic distinction between “that miserable love of systems” and the authentic interiority of piety, feeling, and intuition. Because one cannot get inside other people’s heads to study what the philosopher Immanuel Kant would have termed the noumenon—or so the argument goes—this view assumes that scholars of religion are therefore left with studying secondary, public expressions (Kant’s empirically observable phenomena), comparing them across cultures in search of the similarities and differences that may help us to make inferences about that unobservable and inexpressible unity which is thought to have inspired the diversity of beliefs, behaviors, and institutions. Much like Eliade’s The Sacred and the Profane, “Religion and Culture,” then, names the field which takes as its data the visible shape adopted by what is presumably the inner, transcendental, and distinct essence of religion—a shape taken when piety is not just felt inwardly but expressed publicly in such historical settings as art, architecture, writing, behavior, etc.—that is, in this domain we know as culture. Put simply, drawing on an often found metaphor in the field, we study the branches, which are visible, in order to understand the roots, which are hidden and deep.

Contrary to this approach, to study religion in culture—much as seeing the sacred as nothing more or less than the profane—means that one does not begin with the assumption that two distinct domains periodically bump into each other, for the good or ill of either, producing so-called hybrid or blended effects. Instead, the preposition “in” signifies that the area of human behavior we have come to know as “religion” is assumed, from the outset, to be but one element within human cultural systems—systems which are themselves historical products that, because they are public, can be studied. An assumption basic to this approach is that the objects of study for any scholar in any branch of the human sciences are historical creations that had a beginning and that will change over time. Whether these changes are random or regular, and therefore governed by other factors—such as gender, economics, politics, cognition, or even geography and environmental features—is one of the areas that such scholars explore. To study religion in culture therefore means that one’s object of study is a product of human belief, behavior and social systems. Nothing more and nothing less.

Although it may strike some as a little too subtle, the preposition found in “Studying Religion in Culture,” much as with dropping the conjunction in Eliade’s well known title, signals an important theoretical shift—one that creates a significant gap between Arnal and I, on the one hand, and the work of many of our intellectual predecessors and even some of our peers, on the other—allowing us to conceptualize one formerly distinct item as but an element of the other. In our book the sacred is therefore conceived as nothing more or less than the profane—they are inevitably coterminous and the impression of their distinction is necessarily the result of specific social actors enacting and policing divisions. Which is none other than what Durkheim argued over one hundred years ago—set apart and forbidden…. By whom? For what reason? By what means?

Whatever else religion may or may not be, for the purposes of our work the very presumption that part of the social domain is religious is at least a fascinating element within wider human cultural systems. And this element is made possible by the widely circulating but ill-defined concept represented by the word “religion” itself. This concept and this word are therefore items that rightly ought to be studied, we think, as part of a folk taxonomy local to our own group, as well as others, and doing so by using the same tools and methods that our peers employ throughout the rest of the university, to study how other cultures are fabricated—seeing their components not as true or false but as  ongoing works in progress.

Russell McCutcheon is a Professor in the Department of Religious Studies at the University of Alabama. Interested generally in issue of theory in the study of religion, and specifically in the social and political utility of the very term “religion” itself, he has worked at three different public universities in the US. He came to Tuscaloosa in 2001 to be the Chair of the Department, a role he played until 2009 and which he will again take on in the Summer of 2013. He teaches a variety of courses in the Department, on such topics as the rhetoric of religious experience or authenticity, and continues his research on such topics as religion and modernity. He also has a dog, Izzy.