Nevertheless, murder is never moral–regardless of whether it is done in the name of religion, politics, the nation, ideology, etc. Any such killing of civilians–by the left or the right, religious persons or atheists–is to be denounced loudly and clearly as morally wrong. 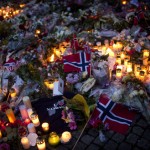 What I write here may seem so obvious that it shouldn’t need to be stated; however, an acquaintance on Facebook asked in his status update, “Where are all the moderate Christians denouncing the extremist Christian shooter in Norway?” As terror analysts, pundits, news anchors, bloggers, etc. ponder why suspect Anders Behring Breivik committed the heinous massacre in Oslo, Norway–especially given their focus on his identifying himself as a Christian and a conservative and his manifesto declaring “pre-emptive war on all cultural Marxist/multiculturalist elites of Western Europe”–I think it important to say a few things. First, those of us who are Christians (moral theologians or not) are heartbroken about the lives that were lost, and the victims and their families are in our prayers. Second, we should learn from the mistaken rush to blame mass violence on Islamic terrorists. As my esteemed colleague John Renard noted a few years ago in a brief but excellent piece (I strongly encourage you to read it) in the Journal of Religion, Conflict, and Peace, “Pervasive and persistent identification of terrorist ideologies and deeds almost exclusively with Islam ignores, or denies outright, the shocking global record of mass violence driven by clearly non-Islamic motivations.” Indeed, many such horrific acts are perpetrated, he writes, by “avowedly secularist” and other groups, including Christians. Related to this point, as William T. Cavanaugh in his The Myth of Religious Violence argues, “In the West, revulsion toward killing and dying in the name of one’s religion is one of principal means by which we become convinced that killing and dying in the name of the nation-state is laudable and proper” (4-5). That is, as much violence is motivated by flag (or, in this case, the desire for a homogenous Europe) than by religious symbol (cross, crescent, etc.). Third, the Catholic moral-theological tradition (along with most other Christian traditions), which more and more emphasizes peacemaking and peacebuilding, even as it continues to allow for the legitimacy of forceful defense of the innocent (i.e., the just war tradition), condemns the intentional targeting and killing of innocent civilians, including youths. Such massacres are murder and never justified. Of course, sadly, in the history of Catholicism (and of the rest of the world) this prohibition has not always been respected. As Anglican Archbishop Desmund Tutu in a November 24, 1996 Washington Post article, “Stop Killing the Children,” has observed, “In the wars of the 1990s, civilian deaths constituted between 75 and 90 percent of all war deaths… Some two million children have died in dozens of wars during the past decade…. This is more than three times the number of battlefield deaths of American soldiers in all their wars since 1776.” Nevertheless, murder is never moral–regardless of whether it is done in the name of religion, politics, the nation, ideology, etc. Any such killing of civilians–by the left or the right, religious persons or atheists–is to be denounced loudly and clearly as morally wrong. Of course, it is too soon as I write this to know whether the perpetrator “intentionally” committed this crime. If he didn’t (e.g., due to serious mental illness), the Catholic moral tradition does not condemn him, subjectively, as immoral, even though his actions, objectively speaking, are indeed immoral. Given that we do not know all this information yet, all I can do for now is emphasize what should be, but apparently isn’t, obvious–that massacres are never moral.

This essay was originally posted at Catholic Moral Theology. Several links are included there.