In the theater of life’s unmitigated pain and chaos, roles are played within the capacities and limitations of the black and brown body. They are seen unchained and risen to life in the crucified and resurrected body of Jesus Christ

As the body cannot be sustained without corporeal food, nor continue in natural life, so without this life-giving food the soul cannot persist in the spiritual life of grace – Denis the Carthusian

2021 already witnessed multiple acts of violence, hostility, and prejudice. One of the major incidents among those was violence perpetrated in George Floyd’s murder. Another heinous act of violence was the Atlanta shootings that claimed the lives of eight people, six of them being women of Asian descent. From the streets of Minneapolis, breaking the barricades in Tunisia and Kosovo, the I-can’t-breath-chants pervaded cities, shook domes, and echoed the skylines. Pain stood still, and tears vivified in the faces of the protestors. The spattered blood of the massacred painted strokes of pain and angst in us. From the suffocated breath and spilled blood of the victims, a theology of body emerges.

In his sermon series, The Theology of the Body, Pope John Paul II notes, “only the body is capable of making visible what is invisible: the spiritual and the divine. It has been created to transfer into the visible reality of the world the mystery hidden from eternity in God, and thus to be a sign of it” (19). When God entered the world, he took the body of Christ, justifying corporeal reality. When the body succumbs to the natural law, God entering the body is the divine law. A divine natural law particularized by the Anglo-Saxon influence restricted inalienable rights to white people (126). It excluded the humanity of black people, ripped off their glory. Slavery provided the testing ground for the Anglo-Saxonist perversions of natural law. This racist perversion of natural law offered religious justification for the enslavement of black bodies. It was a critical factor in the dehumanization of the black body as a chattel (64-65). Nevertheless, “the glory of God shines forth in the weakness of flesh,” says Irenaeus. Liberating our bodies from the clutch of white supremacy essentially restores God’s glory in our lives. A revisiting of the theology of body and flesh helps us locate the divine in the corporeal realm.

Placing black and brown bodies into preconstructed social norms and controlling their movements is a kind of performed ownership. The ownership of nonwhite bodies by white bodies can be called chattelization. In the context of demonization and dehumanization of black bodies, even partial chattelization can act as an archetype of slavery (83). Black bodies are chattelized when torn between immediacies of being a cherished property and a valued commodity. Here whiteness works as the line of protection and demarcation, providing authority over the body it possesses and owning nonwhite bodies.

When black bodies are portrayed as naturally sinful, any notion of freedom from the oppression of whiteness becomes antinomic. Willie Jennings says, in the context of colonialization, displaced bodies were part of colonist’s dismissal of embodied existence and imposed other oppressive structures of natural law and eventually universalizing it (44). It is the ubiquitous example of “occlusion of bodies, their materiality and the projection of debased materiality onto colonized and racialized others.” Here the appeal is made to veer away from theorizations around the body towards a disembodied subjectivity. In short, chattelization is at work, even partially, in the criminalization and demonization of black and brown bodies.

Along with chattelization, the hypersexualization of black bodies became the precursor to constructing a guilty body during slavery. Portraying black women as “temptress” and black men as “predatory bucks” was essential to perpetuate abuse on black bodies (71-72). This ghastly stereotyping had two main implications. Firstly, the hypersexualized stereotype of black bodies helps the promulgation of racialized guilt as a feeling. We need to note the transference of guilt from white bodies to black bodies in this context. Secondly, a black body that carries social and religious guilt inadvertently becomes sinful, becoming violent after mediating the racialized and transferred guilt.

In the recent spa shootings at Atlanta, killing eight people, six of them being Asian women, the perpetrator was racially motivated and sexually instigated. The investigators concluded that the shooter frustrated with sexual sin against Asian women, translating his feelings into a full-blown massacre. Here, racialized guilt associated with Asian women transferred to a white male made him sinful in his thoughts and actions. Here the female body is a symbol of fecundity and unbounded sexuality (187). Foucault argues that there is a shift in the conception of sin – from an extrinsic act of transgression to something intrinsic to the body (179).  The idea of a docile body, subjugated to the control of power, is constructed around shared symbols and regulatory norms. It is a process of oppression and normalization of these practices that allow submission by force (91). It is another way of portraying sinful flesh being pinned to the body (91).  In short, the exoticization and fetishization of Asian women can be likened to locating ‘temptation’ in the body, ideating and regulating them as sexual objects.

On a similar note of finding corporeality for black bodies, we can enunciate the centrality and visibility of Dalit bodies. Every Dalit body disgraced and disdained in the society is an appalling demise of a celestial entity. Their bodies are made of stardust. In his suicide note, Rohit Vemula, a Dalit scholar who obstructed and raised his voice against injustice, noted, “the value of a man was reduced to his immediate identity and nearest possibility. To a vote. To a number. To a thing. Never was a man treated as a mind. As a glorious thing made up of stardust. In very field, in studies, in streets, in politics, and in dying and living.”

In the dramatic wake of the Dalit vision in India, Dalit bodies become central to the discourse. Dipesh Chakraborty says, “The practices that tend to make a human being ‘untouch-able’ focus on the body of the person concerned: it is their touch, shadow, their bodily signs and excretions, their food, and the like, that were and are seen as polluting” (19). In this discourse, Chakraborty relates Fanon’s third-person consciousness of black body with the purity of brahman and impurity of Dalit bodies. In other words, the purity of Dalit bodies is decided by Brahmin bodies. From this point of view, a Dalit body finds meaning in relationality and closeness to (non)human agents that determine its purity. Locating relationality is essential for establishing corporeality in the Anthropocene of Dalit bodies.

The brushstrokes of human suffering and pain embolden the layers of the theology of the body. In the gospel, the body/flesh of Jesus is a boundaryless and interpenetrating construct. God reveals his utter freedom by transgressing rigid markers of race, caste, and color in Jesus. It is an absolute identification with dehumanized and chattelized bodies in Jesus’ body. In Jesus, the Word became flesh and flesh became spirit. The boundaries of body are eliminated in the corporeality of Jesus’ body. In essence, God identifies with our suffering through the body of Christ. Douglas further adds, “the point of emphasis now is Jesus’ intentional association with the most scorned and marginalized bodies of his day” (174). It calls us to transcend the boundaries of our bodies and identify with our brothers and sisters in both body and spirit.

In a remarkable parallel drawn between  Christ on the cross and Japanese Kintsugi art, Fujimura says brokenness hope for new creation in the light of cross and resurrection. Christ didn’t die on the cross to fix us rather make us a new creation. The risen Christ bears the wounds of crucifixion. Through his embrace and revealing of the wounds he opens a new path to renewal (45). Just like the Kintsugi master reshape and re-form a broken teacup with lacquer and gold lining, God reshapes our lives.

When the cross is a re-presentation of human opposition to God’s order of life, Jesus’ resurrection to life is the display of God’s life-giving power. The cross is the starting point of a liberation consummated in Jesus’ resurrection. It was Jesus’ noncooperation with the agents of death that ended up in his crucifixion. If the cross displayed the unimaginable life-negating force, resurrection displayed God’s response to the violence at the cross through life-giving power. It has to be read together; in fact, resurrection has to be understood in relation to the death at the cross to locate redemption for human bodies. 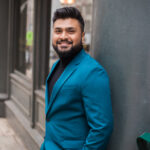 Binu Varghese is a speaker and writer. He holds a ThM from Princeton Theological Seminary and MA in theology from Fuller Theological seminary. His work has been published in the Journal of Colonialism and Colonial History and Asian Journal of Women’s Studies. He focuses on the intersection of religion, race, and caste in the context of the Indian diaspora. He also has strong interest in decolonial thinking and post-colonial studies.