Is there a conversation around political theology (as concept, field, method, or however you understand it) from the past twenty years that continues to fascinate you?

I have a long-term interest in debates about the nature and form of secularity and sovereignty. I continue to be interested in these and the relations between them. But an ancient conversation that was somewhat in abeyance these past twenty years, but which has come into view with a particular vigor of late, is the question of how to understand the human. This is a conversation that seems to connect the multifarious strands of political theology as a field. The boundaries of who counts as human, and thence whose moral and political agency deserves recognition, along with the question of how to distinguish humans from other kinds of being, is always vehemently contested and, more often than not, a site of horrendous evil. But the concept of humanity itself is increasingly in question even as the need for it grows more acute. The ability to edit human DNA, the capacity to merge humans and machines at a cellular level, and the prospect of artificial intelligence that shares characteristics of human consciousness lead some to ask whether there will emerge different kinds of humans or even post-humans. Conversely, attention to how humans are not self-sufficient as a species, but biologically symbiotic with other forms of life, particularly the microbiome, and how the quality of these symbiotic relations directly affects what are taken to be specifically human capacities, notably higher level reasoning, blurs the sense of humanity as a singular phenomenon. For example, in bio-centric frameworks, humanity is merely a knot in a broader assemblage of life, and it is the whole assemblage, not humanity, that is the center of value.

If on the one hand, there are moves towards the dissolution of humanity as a thinkable entity, there is, on the other hand, an ever-greater impetus to use humanity as a category for delineating moral and political responsibilities. A pressing example is the concept of the anthropocene. Then there is the question of how a notion like the anthropocene connects to more established foci in which humanity is the primary locus of moral and political concern; namely, the legitimacy and efficacy of human rights, and aligned notions such as crimes against humanity, genocide, global citizenship, and humanitarianism.

Many branches of the humanities are taking up these questions, but at root these are theological questions. A central feature of political theology is to expose the problematic ways in which modern political thought attempts to suspend or conceal religious and theological frameworks and, conversely, the ways in which religious and theological belief and practice is itself a mode of political and economic governance. Talk of humanity operates in both these registers in ways that needs much further attention.

What conversations working with the concept of political theology do you find most fruitful today?

I find the conversation about the role of political theology in conceptualizing the relationship between ethics and politics both urgent and fruitful. Others may not even see this as a conversation, so let me expand a little on what may appear a cryptic comment. There are numerous accounts of politics that see it not simply as either morally ambiguous or tragic but as amoral or even as necessarily immoral. Within such frameworks the primary concern of politics is power and its operations not the fulfillment of moral goods or the cultivation of human flourishing. To pursue moral goods through politics and insist that politics is a realm of virtue paradoxically corrupts politics. Within such frameworks, political theology is an instrumental tool that serves to bind the polity—its truth claims being secondary or entirely irrelevant to its functional value as a source of social cohesion. Such “realist” approaches have taken particular forms in modern political thought, from the revolutionary to the reactionary. For Lenin, revolutionary change demanded the suspension of the ethical and any insistence on upholding virtues such as kindness was denounced as bourgeois: “In our opinion, morality is entirely subordinate to the interests of the class war.” Likewise, for Carl Schmitt, the exercise of sovereignty could not be constrained by moral norms and virtue was a private matter that had no place in defining political—that is, friend-enemy—relations. In the realm of neoliberal economics, the business of business is business, with moral considerations suspended as an externality the inclusion of which constitutes an illegitimate intrusion into economic calculations. The prophet of such an approach is of course Mandeville, for whom private vices produce public benefits. And while social democracy is motivated by moral commitments to equality and social justice, from the Fabians onwards, governmental operations are envisaged as an amoral, bureaucratic exercise in technical rationality. But does politics and economics necessitate the suspension of the ethical? Or is ethics constitutive of politics? And is emancipatory change simply a question of changed structures, or does it necessitate the formation of virtuous people as well? In which case, is political theology a subset of moral theology? These were central concerns of Gustavo Gutiérrez in his groundbreaking work of political theology, A Theology of Liberation. And they have come back into view in a diverse range of thinkers who emphasize the importance of love in relation to the means of generating a process of political change, pointing to how a freer, more egalitarian, just and democratic society has to be forged out of changed people and the quality and character of relationships between people, as well as changed structures. For example, bell hooks, Rosemary Hennessy, Jennifer Nash, Elizabeth Povinelli, Chela Sandoval, and Cornel West have reached for the language of love in order to articulate what a politics of change that addresses the need for changed people not just changed systems might entail. There is an analogue here with developments in “civic Augustinian” political theology where an emphasis on love is seen as a necessary complement to a focus on justice. But further consideration is needed as to the roots and implications of the conceptual suspension of the ethical in modern political and economic thought. And even for those who have made either love or moral character a central concern, it is not clear how attention to questions of the quality and character of relations (or virtue) connect to notions of radical democratic politics. And while love is a crucial means for addressing the inter-relationship between the personal and the political, does the nature and form of love need reimagining if it is to include the non-human as a constituent agent in forms of political life? This conversation seems important if the kinds of changes that are needed to address the evils and wicked problems that beset contemporary life are to be addressed in a way that does not produce a new set of dehumanizing procedures and operations. Which is to say, if people—and the realm of ordinary affections and loves that make up their ways of surviving and thriving—are to be put before a top down procedure, the whims of a self-proclaimed revolutionary vanguard, an ideological blueprint, or a technocratic program of social engineering, then there is a need to debate the ends or telos and what normative vision of creational flourishing politics and economics are seeking to embody.

Where do you hope to see discussions of political theology in 20 years?

Let me bracket the probable collapse of numerous forms of political and economic order and the emergence of radically new patterns of life together that political theology will have to reckon with in the coming years. Let me also bracket whether something called political theology as an academic field will still exist in twenty years time. And I will take as a given that the millennia-old task of thinking theologically about moral and political questions will continue, whatever the circumstances and means of its production entail. One hope I have is that creation is no longer seen as a mere platform which humans make use of for their moral and political lives and that the anthropocentric and voluntaristic ways we conceive moral and political life will be fundamentally disrupted and transformed. Instead, what I hope will emerge are accounts of human moral and political agency that render it incomprehensible other than as constituted through mutually entangled relations with nonhuman forms of being alive. In short, the rest of creation will be seen as a constitutive agent in our moral and political lives. Many others have said this more eloquently and urgently than me, but we desperately need ways of imagining and narrating a single reality born out of the interaction of divine, human and non-human ways of being alive rather than thinking about human moral and political life and agency—and the conditions of cultivating just and loving forms of common life—as on the one hand separate from God, and on the other, independent of the rest of creation. 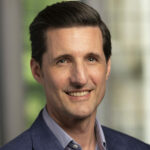 A Londoner by birth, Luke Bretherton is Robert E. Cushman Distinguished Professor of Moral and Political Theology and Senior Fellow of the Kenan Institute for Ethics at Duke University. Before joining Duke in 2012, he taught at King’s College London. His latest book is Christ and the Common Life: Political Theology and the Case for Democracy (2019).