Since announcing his run in 2015, Donald J. Trump has enjoyed almost unwavering evangelical support.  Included in the evangelical lot of those who believe that “God wanted Trump to be president” are Pentecostal-Charismatics.

Without question, the Trump campaign knew that American evangelicalism formed a spurious alliance with the Republican Party in the 1970s. Anthea Butler notes that this shift rendered evangelicals, as a group, “not just religiously or culturally white” but also, “politically white.” By aligning with the Republican Party to sustain cultural whiteness, evangelicals became a powerful voting bloc and a formidable lobbying presence on Capitol Hill.

But in their collective overt appeals to Pentecostals as evangelicals, the Trump campaign proved savvy and highly pragmatic. By taking a cue from the National Association of Evangelicals (NAE), who first coupled Pentecostals with evangelicals in 1942, Trump significantly extended his political reach among conservatives—because while Baptists are fully 15.4 percent of the adult US population, for example, there are something like 10 million Pentecostals and charismatics in the US.  This isn’t always obvious in ways that demographers track denominational categories. But somehow Trump’s campaign circuit targeted several non-denominational megachurches, whose memberships sometimes reach into the tens of thousands and make up a big slice of the evangelical pie.

If the world of megachurches is a challenge to trace, it might be even harder to navigate from within. Yet, Trump seemed almost drawn to Pentecostal-Charismatics and their sumptuous houses of worship.  Most likely he was drawn to Pentecostals-Charismatics’ affinity for him: for their ready appreciation of his affluence and wealth. Of course, Pentecostal-Charismatics’ affinity for wealth and affluence did not begin with Trump: a whole sector of Pentecostalism runs on the prosperity gospel. The prosperity gospel emphasizes divine health and wealth as the reward for extraordinary faith. It provides ecclesial jargon for the neo-liberal values of American evangelicals.

In a capitalist society, the prosperity gospel perpetuates the cultural myth within the Protestant work ethic, insisting that health and wealth are the exclusive benefits of those who attend to some esoteric formula of hard work, thrift, and resourcefulness. It thereby ignores problems around access, privilege, and structural/systemic oppression. Preferring instead narratives of personal success (sans socialist ideas of collective care, communal responsibility, and shared resources), the prosperity gospel, much like the evangelical doctrine of salvation, is woefully individualistic. Trump readily became emblematic of this popular theology.

Critically, like evangelicalism as a whole, adherents of the prosperity gospel are not all white. Take, for example, Darrell Scott, the pastor and co-founder of the New Spirit Revival Center, “a Bible-based, Non-Denominational church with a Pentecostal/Charismatic persuasion” in Cleveland Heights, OH. Scott is a Black evangelical who so embraces the unholy merger of Christianity and American capitalism that he promotes a disturbing “bootstrap” philosophy—one that reduces the state of Black America to wealth-building sans a critical examination of the impact of systemic racism in this country. In 2015, Scott was introduced as part of Donald Trump’s Transition Team.

Though Scott pastors a predominantly Black church with a Black Pentecostal religio-racial aesthetics, in joining Trump’s team, he performed what Butler calls “Christian Blackness,”—the performative expectations and values of the Religious Right vis-a-vis the Christian Coalition of the late 1980s.

Noting Scott’s surrogacy for Trump, David Wiegel asked “What makes a Black Cleveland Pastor back Donald Trump?” Yet, I am more inclined to ask another question: why did Trump take an interest in Scott? In truth, at the time of their first meeting at Trump Tower in 2011, Scott was a fledgling televangelist with aspirations of being a leading megachurch pastor. Essentially, Scott lacked appreciable religio-social capital in the Pentecostal-Charismatic arena and the Black Church in particular. In other words, in the Black Pentecostal world, Darrell Scott was no T.D. Jakes.

Recalling the details of that first meeting, a flattered Scott claims to have found Trump to be “a prayerful Christian” and not the irascible business tycoon portrayed on television. Moreover, he said that he left this first meeting believing that Trump was “someone who would fight with [him] to defend his community and his faith.”

In Scott, Trump found a black ally for whom his partnership could make a material difference. By 2015, Scott’s wife Belinda was a failed reality TV star, but in exchange for his steadfast, if not recalcitrant support of a Trump presidency, Scott gained access to previously unimaginable platforms and media outlets. Eventually, he assumed an advisory role as a member of Trump’s executive transition team and, later, an opportunity to co-found the National Diversity Coalition for Trump.

Amidst the growing number of Pentecostal surrogates, the media coverage of Trump’s evangelical base, and the burgeoning scholarship around the history of evangelicalism in America and its political influence, no one seemed to inquire about what Trump knew about Pentecostals as a distinct voting bloc and how he imagined someone like Scott advancing his appeal among its Black constituency?

I submit that Trump intuited that Pentecostals, especially those with an affinity for prosperity, revered the materially “blessed.” Consequently, his purported wealth and public persona made him particularly desirable, if not enviable. He also understood—what Wiegel and others did not—that Pentecostals like Scott tout morality, but immorality itself is never really a deal-breaker. From the biblical King David to televangelist Jimmy Swaggart, practitioners of prosperity theology are trained to believe that “sin” does not preclude one from a protagonist role in the divine narrative. Being categorized as the anointed/most blessed one, divine protagonist Trump would not be disqualified but rather readily absolved.

Beyond believing that the anointing which is evinced by material blessing includes impunity, Trump-supporting Pentecostals of the prosperity sort also believe that the anointing is transferable. Because blessings are contrived as a matter of proximity, endorsing Trump meant being aligned with God’s favor. Sadly, this cast of religionists, eager to be prosperous “like Trump,” failed to consider how in doing so, they became co-conspirators of the injustices fashioned in our inequitable and capitalistic society.

Following the November election, several Pentecostal-Charismatics either have repented of their false predictions or nuanced their original claims. Still, there are those whose loyalty to Trump remains unbroken. In choosing to double down on their allegiance to Trump, Pentecostal-Charismatics have joined the fray of other supporters in normalizing false political propaganda and conspiracy thinking—with theories ranging from the precarious state of American religious freedom to the events of January 6.

Scott, in particular, took to his iHeartRadio program to assert that on January 6, Congress set up Donald Trump. According to Scott, their goal was to impeach Trump to prevent him from holding public office again. He went on to say that “The Capitol riots were pre-planned, and they knew days in advance that it was coming. The Capitol Police were told to hold back on the response[;] they were given a stand-down order. This was no coup, it was no insurrection, it was no attempt to overturn the election. They were told to stand down. It was a setup.”

Here, Scott is acting as Trump’s protector; in doing so, he is proving to the former president that election results aside, he is an uncompromised surrogate who will attend to the Trump cause even if it means defying reason or logic. But why? I contend that Scott’s discourse reflects a larger gendered [Black] Pentecostal hermeneutic given to a radical practice of obeisance to male authority. Often summed up by paraphrasing Psalm 105:15—“touch not my anointing and do my prophets no harm”—this form of radical deference to God-ordained authority shows up as a form of Pentecostal anti-Donatism that shies away from holding leaders accountable for their actions as long as they continue to do the work of the ministry on behalf of the church.

In the classical sense, the Donatist controversy focused on the unity and holiness of the church.  In opposition to Donatism, St. Augustine maintained ex opere operato: “by the work having been performed.” In short, anti-Donatists like St. Augustine felt that the sacrament’s validity does not depend on the sinlessness of the minister but the celebration of the sacrament. Moving away from the context of origin to our contemporary religio-political climate where Trump is King Cyrus, we can understand Scott’s claim that Trump was set up as an extension of his reverence for Trump as both most blessed and commander-in-chief. By saying that Trump was “set up,” Scott solidified his conviction that everything Trump did as president was above reproach—including but was not limited to inciting a riot.

Today, in the post-election and post-January 6th shadows of the Trump Era, the roll call of evangelicals who paved the way for a Trump White House very rarely, if ever, includes Scott. Generally, that honor goes to Scott’s white counterparts. For all of his work, he is now little more than a footnote in this larger story. Although he still pastors, his political impact has been reduced to 140 characters on Twitter and a poorly publicized memoir.

Is Scott’s less than subtle erasure from the annals of the Trump Era because of his ineffectiveness at getting the former president the Black Pentecostal-Charismatic vote? Or, is it because he was just one [Black] pawn among many in the political game of evangelical chess? Whatever the case, failing to include Scott in this chapter of America’s religious history is a grave mistake.

For all of his vitriol and lambasting and the shame he brought to the legacy of Black evangelicals, Scott is symbolic of a small but noteworthy voting bloc of Black evangelicals. To disregard his role during the Trump Era is to miss an opportunity to interrogate Black Pentecostal-Charismatics as a distinct group with particular political sensibilities. 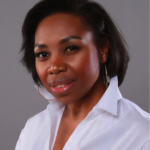 By Dara Coleby Delgado
Dara Coleby Delgado is Assistant Professor of Religious Studies and Black Studies at Allegheny College in Meadville, PA. Coleby Delgado is a third-generation Pentecostal, reared in the Apostolic/Oneness tradition. In 2019, she completed her doctoral work in theology at the University of Dayton. There, Coleby Delgado examined the life and work of Bishop Ida Bell Robinson, founder of the Mount Sinai Holy Church of America, using a social-historical frame that employed both feminist/womanist theology and Critical Race Theory. Currently, Coleby Delgado is working on her forthcoming book on the same topic. In addition, she is a 2018-2019 AAUW Dissertation Fellow, and she has written about Pentecostals in scholarly journals and popular news outlets alike. 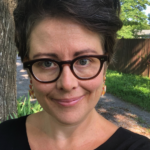 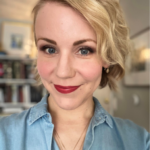 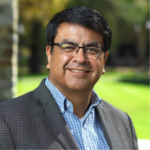