[Below is an excerpt from A Faith Not Worth Fighting For: Commonly Asked Questions about Christian Nonviolence. We welcome comments, responses and reviews.] In 1569, a Christian by the name of Dirk Willems was burned at the stake for committing a capital crime: being an Anabaptist. It has been jokingly said that….

[Below is an excerpt from A Faith Not Worth Fighting For: Commonly Asked Questions about Christian Nonviolence.  We welcome comments, responses and reviews.] 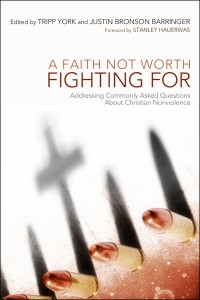 In 1569, a Christian by the name of Dirk Willems was burned at the stake for committing a capital crime: being an Anabaptist. It has been jokingly said that the only thing Catholics and Protestants could agree on in the sixteenth century was that it was a good thing to kill the Anabaptists. While that may or may not be true, it is certainly the case that neither Catholicism nor Protestantism tolerated the dissenting “heterodoxy” of the Anabaptist movement. The Anabaptists were a body of Christians who, among other things, would not swear oaths, argued for a believer’s baptism, resisted clerical hierarchy, and refused to wield the sword. Though they claimed such practices were scripturally accurate, the powers that be (the Catholic and Protestant state churches) concluded otherwise.

The Anabaptists were a threat to the social order. They had to be put to death. On the dual charges of sedition and heresy, many Anabaptists underwent public executions (oftentimes after enduring excruciating bouts of torture). This was a case of Christians killing other Christians over issues regarding both orthodoxy and political allegiance. As you can well imagine, it was not the most grace-filled period in the history of Christianity.

Amidst the chaos and violence of sixteenth-century Christianity, there were, on all sides, moments of authentic Christian witness. Dirk Willems offered what we imagine to be an incredibly difficult, odd, subversive, yet faithful response to his killers. As he was fleeing from a hired “thief-catcher,” he crossed a frozen river in an attempt to escape his pursuer. As he cleared the ice, he heard a crack and a splash. He looked back to find the pursuer drowning in the icy water. Some would view that moment as providential. God was providing Willems an easy escape. Others may view it as just desserts or karma for the thief-catcher—that’s what he deserves for attempting to be complicit in the death of an innocent human being. Others still may see it as nothing more than a natural consequence: ice cracks under a certain amount of weight, nothing more need be said.

Willems saw it differently. He viewed it as an opportunity to help a suffering neighbor—one who also happened to be his enemy. Willems turned around and helped the man out of the icy river, saving his life. Overwhelmed by the mercy shown him, the thief-catcher wanted to release Willems. Regrettably he was unable to, as the thief-catcher was instructed to remember his oath and detain him. Willems was apprehended, tortured, and burned at the stake. He was killed by those who claimed to know the peace that is Christ.

For as adamant as many Christians are about practicing their biblically based faith, the majority of us struggle to understand why the practice of violence may be at odds with the life and teachings of Jesus. Granted, in the case of Dirk Willems, it may be easy to spot the error of his Christian executors from our contemporary perspective. But it wasn’t easy then, and we don’t imagine it is always easy to spot how we are disobedient to Jesus now.

For too long, the lure of violence has gripped and owned much of Christian thought and practice. We have assumed its necessity for so long that it remains easy to justify any present situations in which we imagine that the potential ends of violence outweigh the potential problems it causes for those serious about following Jesus. To be sure, we rarely engage in violence unless we think it is for a good reason. Much of why we resort to it is rooted not in what we hate, but in what we love. It is out of our many loves that violence so often becomes a great temptation. We wish to protect our loved ones, our families, our friends, and ourselves. Of course, these very reasons have led to many wars, pogroms, inquisitions, and public executions.

Dirk Willems was executed because he was thought to be a threat to the common good. Better to kill him than allow him to live and potentially infect a larger section of society with his heresy. It was specifically out of obedience to the command to love one’s neighbor that Willems, theologically, had to be executed.

Following Jesus could demand a lifelong commitment to nonviolence.

Since Jesus was fully human and fully divine, his life and teachings are normative for Christian discipleship. Nonviolence, the path that he taught and lived, is therefore at the heart of what it means to follow/imitate Jesus. It has such incredibly important implications for how we think about those practices that fall under the domain of Christian ethics. It shapes not only our attitudes and practices toward war and capital punishment, but it shapes how we think about money, sex, marriage, race, and even our language.

Being nonviolent may just as likely fail, according to how you define failure, as it may succeed. After all, many of the prophets and most of the disciples ended up on a stake of some sort. Indeed, if the reason Jesus was killed was because his way of life conflicts with the principalities and powers, then we should expect our way of life will probably not look like glowing victories (in terms of how the world views victory). With that being said, Gandhi trumped the British, Fr. Roy Bourgeois is close to shutting down a terrorist training facility in Georgia, and Martin Luther King, Jr. convinced the non-convinced that black people really are, as Cornel West astutely put it, human beings. Oh, and Jesus redeemed all of creation by absorbing violence rather than returning it to its source. That, to me, seems to be significant.

Tripp York, PhD, teaches in the Religious Studies Department at Virginia Wesleyan College in Norfolk, Virginia. He is the editor of the newly released A Faith Not Worth Fighting For as well as the author and editor of numerous other books includingThe Devil Wears Nada, Donkeys and Kings, and Living on Hope While Living in Babylon.